Scientists from the IREC propose the application of quantum vaccinomics to further contribute to vaccine development by facilitating antigen combinations to target pathogen infection and transmission in current and emerging infectious diseases such as COVID-19.

Vaccines are the most effective and environmentally intervention for the control of infectious diseases and have evolved through different vaccinology stages to the currently ongoing vaccinomics platforms . Vaccinology progressed with advances in genetic engineering and biotechnology to reverse vaccinology, computational vaccinology, personalized vaccinology, and recombinant vaccines but last advances in vaccinomics have provided new platforms to accelerate and improve vaccine development.

A new proposal led by researchers José de la Fuente and Marinela Contreras, from the Research Group in Health and Biotechnology (SaBio) of the Instituto de Investigación en Recursos Cinegéticos (IREC – CSIC, UCLM, JCCM), consists of the application of quantum vaccinomics. This new approach is based on the concept of quantum biology and quantum immunology, posted the question on whether the laws of atomic and quantum physics are of essential importance for life.

After the discovery of the DNA double helix structure by Watson and Crick, Löwdin proposed in 1963 the proton tunnelling as the mechanism for point mutations in DNA model. These findings provided support for the discipline of quantum biology. However, the area of quantum biology related to mutation requires experimental evidence that are difficult to obtain due to difficulties in their tractability to precise physical measurement contrasting incoherent random mutagenesis with quantum coherent mutagenesis. Nevertheless, it is accepted that quantum dynamics within living systems has been subjected to optimizing evolution, and life has learned to manipulate these quantum systems to its advantage in ways that need to be approached by future quantum biology studies.

Based on these findings, the development immune system contains random processes such as immunoglobulin recombination events and the direct correlation between atomic coordination and peptide immunogenicity that support quantum immunology and allow addressing the generic issue of protein-protein interactions.

The characterization of protein-protein interactions and vaccinomics have been proposed as approaches for the development of vaccines. In similarity with Albert Einstein’s definition that the photon is a quantum of light, the immune protective epitopes were proposed as the immunological quantum. Then, we proposed the quantum vaccinomics approach based on the characterization of the immunological quantum to further advance the design of more effective and safe vaccines for the control and prevention of COVID-19 and other emerging infectious diseases. 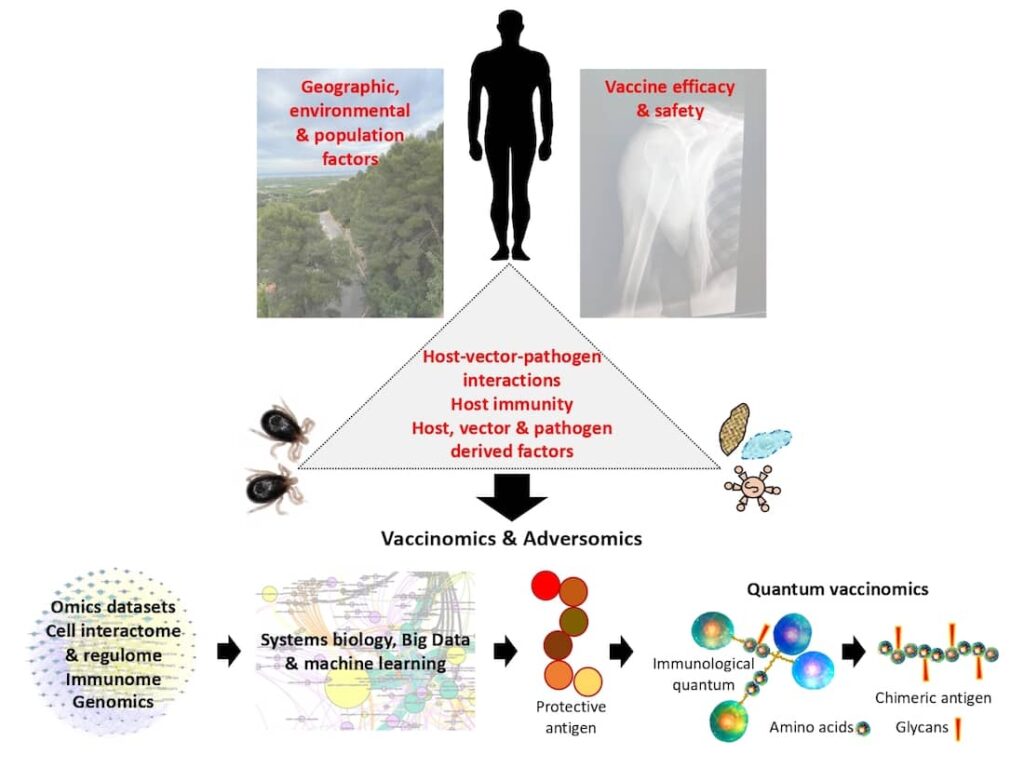 The rationale for selecting these proteins is that vaccination with protective epitopes in protein interacting domains will induce an antibody response not only interfering with protein translocation to the nucleus but also blocking protein-protein interactions involved in the regulation of multiple biological processes. A previous proof-of-concept was vaccines based on chimeric antigens containing Akirin/Subolesin protective epitopes (Q38 and Q41), showing efficacy for the control of different ectoparasites and infection by vector-borne pathogens.

The glycoengineering of vaccine chimeric antigens is another approach with promising possibilities to improve vaccine efficacy by the characterization and selection of glycan-type biomolecules together with protein protective epitopes for the generation of multi-epitope vaccines with highest efficacy. Based on this approach, the immunization with the glycan Gal(alfa)1-3Gal(beta)1-(3)4GlcNAc-R (alfa-Gal) has shown to induce a protective immunity to various infectious diseases.

The antigens designed based in the immunological quantum have limitations mostly associated with difficulties in reproducing the original 3D structure of epitopes and the poor protective efficacy of antibodies directed against protective epitopes as compared to polyclonal antibodies directed against the whole protein. Nevertheless, some of these limitations could be addressed by addition of glycan modifications and the use of vaccine production platforms such as virus-like particles (VLPs).

The proposed approach of quantum vaccinomics is a step forward to address main challenges and further advance vaccinology that will allow a better design of more effective and safe vaccines for the control of infectious diseases.