Scientists from the IREC and the Universidad de Sevilla study the role of mineral supplementation in extensive livestock farming as a factor for the transmission of pathogens between wildlife and livestock, taking animal tuberculosis as a study model.

For years, the Research Group in Health and Biotechnology (SaBio) of the Instituto de Investigación en Recursos Cinegéticos (IREC – CSIC, UCLM, JCCM) has addressed, from different approaches, the problem of shared diseases between wildlife and extensive livestock . Thanks to the work carried out with farmers, their interest in knowing the epidemiological risk involved in the use of mineral supplementation, a widespread practice in extensive livestock farming, has become evident.

Recently, the survival of Mycobacterium bovis (one of the bacteria that causes animal tuberculosis) on livestock mineral blocks has been confirmed, but little is known about its implication in the transmission of animal tuberculosis under field conditions.

Thus, researchers from the SaBio Group of the IREC and the Department of Microbiology of the Universidad de Sevilla have described, by means of camera-trapping and DNA analyses, the use patterns of mineral supplementation, its determining factors and its potential role in the transmission of Mycobacterium tuberculosis.

Different domestic and wildlife species, all of them potential reservoirs of animal tuberculosis, making use of mineral supplementation.

This work has shown that cattle, goats, sheep and pigs, as well as the red deer (Cervus elaphus) and wild boar (Sus scrofa), make use of mineral supplements, with livestock species being the main users. However, it was also clear that daily use patterns differ between livestock and wildlife species, since the former are mainly diurnal, and the wild ones present a nocturnal-crepuscular use pattern.

It was also observed that wild boars tend to use the mineral supplement if it is also used by cattle, perhaps attracted by the invertebrates that feed on cattle feces; and that the red deer tend to use more mineral supplementation in those farms where there is no hunting pressure, preferring those mineral blocks close to areas of forest or dense scrub. 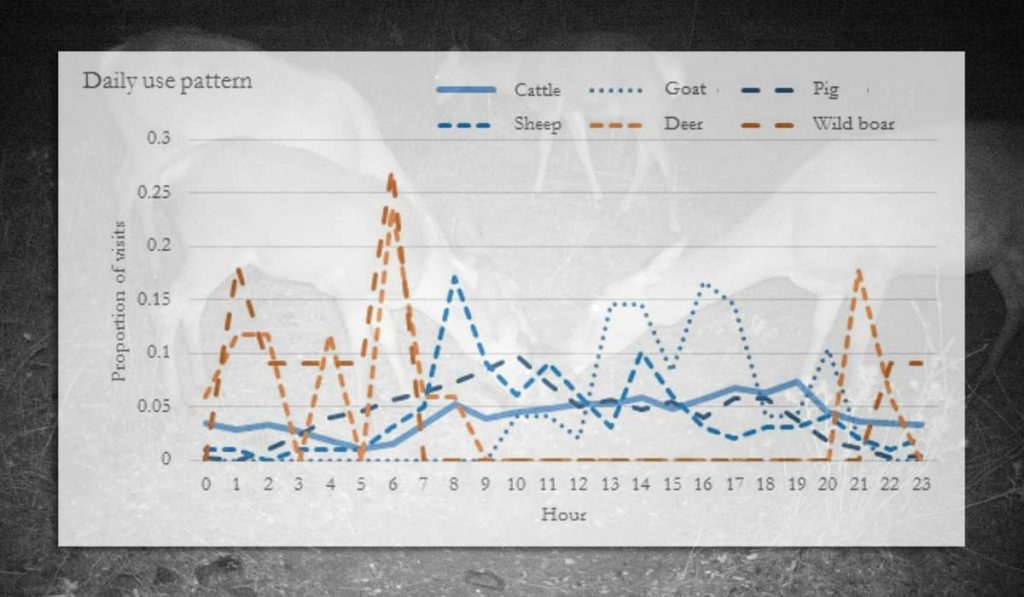 Daily use pattern of mineral supplementation for the different animal tuberculosis reservoir species in the studied livestock farms.

On the other hand, no DNA of the Mycobacterium tuberculosis complex was isolated in any of the samples that were periodically taken from the mineral blocks. Thus, the study concludes that, compared to other environmental sources of mycobacteria of the M. tuberculosis complex (mainly water ponds), mineral blocks are less attractive to wildlife and represent a lower epidemiological risk, although they cannot be ruled out as a factor for the transmission of pathogens, especially between individuals of the same species.

The authors propose a series of simple and practical management measures that drastically reduce the risk of pathogen transmission between wildlife and extensive livestock at mineral supplementation points, including the placement of mineral blocks in grasslands, far away from vegetal cover, accessible only during the day and at a certain height from the ground.