The Random Encounter Model (REM), based on the use of camera traps, has been validated as a reliable method for estimating population density of multiple wildlife species with the same study design.

Improving our knowledge on wildlife distribution and abundance is currently a key and priority aspect. Although a wide variety of methodologies have been described and tested to estimate abundance (total number of individuals) or population density (number of individuals per surface unit), sometimes the application of these methods entails a large cost, both in terms of economic and human effort. Thus, the current lines of research focus on validating new tools that allow optimizing these efforts, and improving the applicability of methods in the field, in order to reach a greater number of animal species.

Scientists from the Research Group in Health and Biotechnology (SaBio) of the Instituto de Investigación en Recursos Cinegéticos (IREC - CSIC, UCLM, JCCM), in collaboration with researchers from the Swedish University of Agricultural Sciences (Sweden), have evaluated the reliability of a new method, which uses camera trapping as a tool, to estimate population density of multiple wildlife species with the same study design.

Traditionally, the estimation of population densities of abundances from camera trap data was based on the recognition of individuals, that is, individualize each of the registered animals based on the unique and exclusive pattern of natural or artificial marks on their body, as has been done with the Iberian lynx (Lynx pardinus). Nevertheless, most species of wild mammals do not have natural marks that enable individual recognition (such as hares, rabbits, foxes, wolves, bears, badgers, wild boars, deer…), thus this method is of scarce applicability for many animal species. In this context, in recent years several methods based on camera traps have been described to estimate population density, but without the need to recognize individuals. One of these methods is the random encounter model (REM), described in 2008. 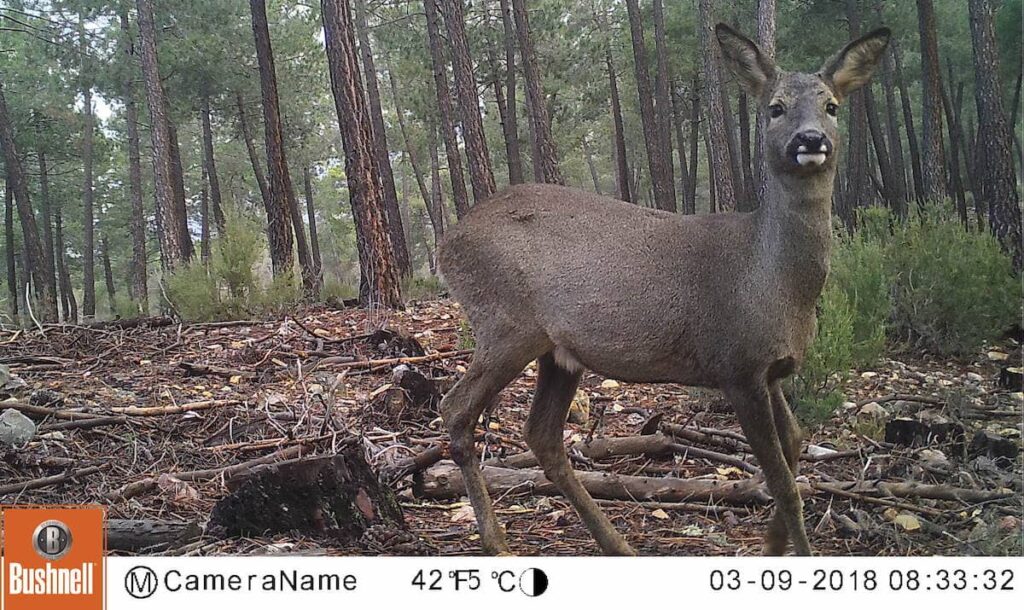 Roe deer (Capreolus capreolus) photographed by camera trapping. The absence of a phenotypic pattern that would clearly differentiate some individuals from others within a population made it difficult to estimate their density or abundance by camera trapping through the recognition of individuals.

In this work, the REM and other reference methods have been applied in parallel to estimate the population density of 13 populations in Spain, considering as model species the hare ((Lepus granatensis), the roe deer (Capreolus capreolus), the red deer (Cervus elaphus), the fallow deer (Dama dama), the wild boar (Sus scrofa) and the mouflon (Ovis musimon). In addition, it includes a review of all animal populations worldwide in which the REM has been tested against other reference methods. In total, the scientists found 77 comparisons of the REM with other methods. The sampled species have been very diverse, from lions, bears or chamois to hedgehogs, among others; and the REM has been applied in environments as diverse as urban areas, African savannahs or high mountain areas.

The results obtained, published in the prestigious journal Remote Sensing in Ecology and Conservation, show that when the estimation of all the parameters necessary to apply the REM is correct, this is a reliable method, obtaining mean values equivalent to those obtained with other methods. In addition, it has the great advantage of allowing the population density of more than one species to be estimated with the same study design.

Thus, the REM is presented as a method with high interest to be included in works that focus on the community of species present in a study area, such as health surveillance programs or new conservation projects including the monitoring of European wildlife population. 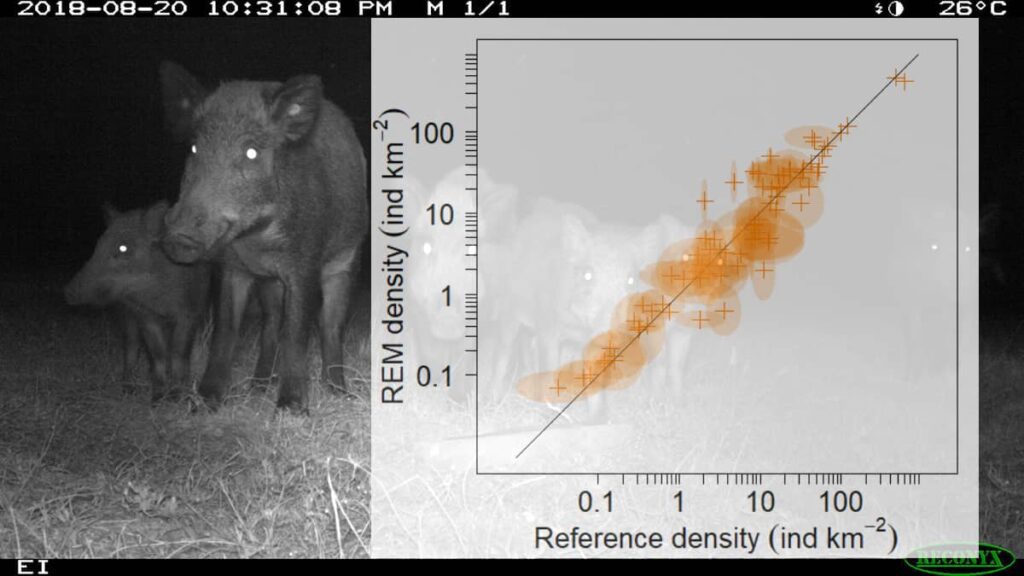 Comparison of the densities obtained with the Random Encounter Model (REM, vertical axis) and with the reference methods (horizontal axis). Crosses represent mean density values and ellipses the error associated with each value.