Anthropogenic noise is present in almost every protected area, causing real and potential disturbances to fauna at both individual and population levels. On the one hand, noise can cause changes in behaviour and, therefore, an extra expenditure of energy derived from the need to move to safe areas, which affects the physical fitness and reproductive performance of animals. At the physiological level, there may also be more subtle effects, such as the activation of the stress response, which leads to the depletion of energy reserves, generating a loss of body condition that can affect demographic and reproductive parameters. On the other hand, a prolonged acoustic disturbance can compromise the presence or absence of the most vulnerable animal species in a given place.

The most common approach to analyzing wildlife disturbance from aviation is based on aircraft type. Helicopter noise has received a great deal of scientific attention, and with the advancement of technology, studies have recently been developed to understand the interaction between wildlife and drones. However, other types of aircraft, such as glider planes or hang-gliders, have been less studied, although research indicates that they also have negative effects on wildlife. 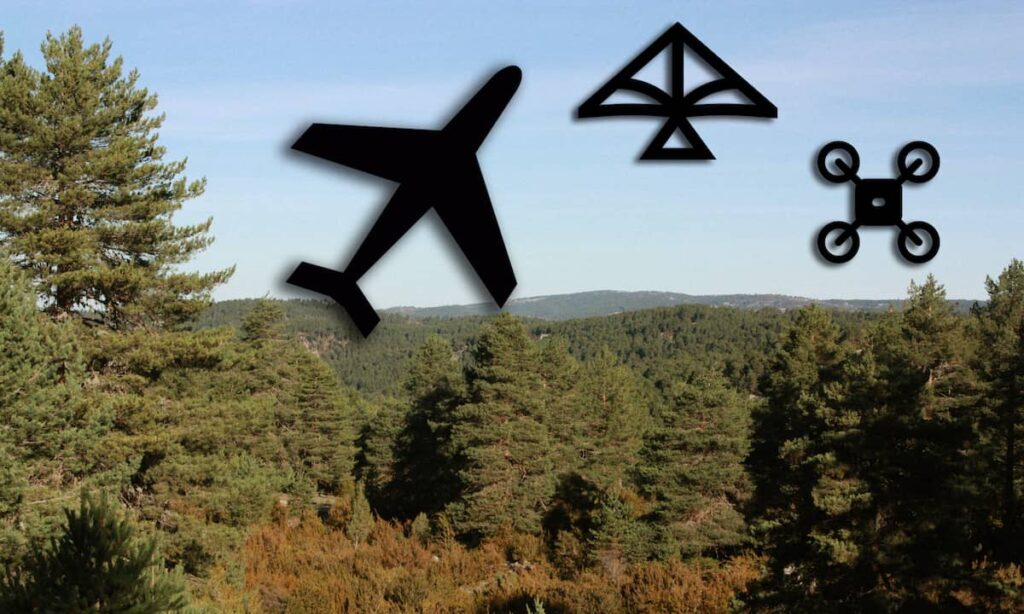 There is variability in the response of animals to aircraft disturbances depending on the species, the type of aircraft and its characteristics, being greater for large and noisy aircraft such as military helicopters or large drones.

Scientists from the Research Group in Game Resources and Wildlife Management of the Instituto de Investigación en Recursos Cinegéticos (IREC – CSIC, UCLM, JCCM) and the Ministerio para la Transición Ecológica y el Reto Demográfico (MITERD) have evaluated the current and historical situation of aeronautical regulation in protected areas in Spain. The conclusions obtained have served to agree, with the collaboration of the MITERD and the Regional Governements, several general criteria on heights and distances in protected areas that allow coexistence between aviation and wildlife, promoting a new homogeneous regulation for all protected areas in Spain.

Spain has one of the densest airport networks in the world. Tourists arriving by plane represent a crucial economic resource in many places, especially on islands, with many critical environmental implications. Establishing overly strict conditions for air tourism might prevent or reduce it in many regions and would not have a cost-benefit from sociological and financial standpoints. For this reason, the researchers consider that the steep increasing trend since the 1980s in both the number and area of sites under regulations was sustained in a period of satisfactory economic development that allowed an approach that is more restrictive on aeronautical economic activities and more respectful of biodiversity conservation. Since then, positive attitudes towards the environment have grown in Spain, thus this change might have eased this process of increasing regulation.

Analyzing restrictions per aircraft type, regulations are not very specific. In Spain, the current legislation regulating maximum flying heights establishes differences among UAS (120 m AGL), balloons, glider planes and motorised hang-gliders (300 m AGL), and there is a minimal flying height for planes and helicopters (150 or 300 m AGL, depending on the flying mode). Any restriction above those heights will be, inevitably, banned. In this sense, protected area managers should take into account the different maximum flying heights per aircraft type before setting any operational restriction.

As stated before, according to Spanish legislation these restrictions exclude most aircraft types. Therefore, management plans should consider the existence of other sectorial regulation to avoid excluding certain activities that might be compatible. The increasing trend of establishing a previous authorisation for flight activities might be a solution in many protected areas. Defining a priori conditions for flying over the most critical places would be a solution for protected areas with a low to moderate number of operations.

Protected areas have great importance for the conservation and maintenance of biodiversity, as well as for human well-being, so as far as possible they should be protected from the impacts of aviation activity. Current aviation regulations are almost exclusively focused on issues of wildlife–aircraft collision and noise impacts on humans, thus laws and their implementation relative to wildlife conservation are far from adequate. This work shows how it is possible to involve the different institutions in order to achieve a regulation that allows coexistence between aviation activities and wildlife conservation in protected areas.

The publication of this scientific review is available at: