The use of several complementary methodologies allows to identify in detail the social network of interactions between wild ungulates and livestock in areas where they coexist, providing the keys for the correct management of shared diseases by reducing the risk of pathogen transmission.

Some bacteria, viruses, protozoa and fungi may cause infectious diseases in animals or plants that can be very harmful or even fatal to their hosts, so that they are considered as pathogenic organisms. In the case of animals, the transmission rate of pathogens depends on interactions betweeninfectious and susceptible individuals, as well as on the probability of infection during each interaction.

The calculation of these parameters is a challenge for epidemiologists –the scientists studying the distribution and the factors causing infectious diseases–, since it is mandatory to prevent or stop the transmission of diseases and the occurrence of health emergencies.

Solving this challenge is not only crucial in the case of infectious diseases that affect human beings. The proper management of shared diseases between wild ungulates and the livestock that is reared in the field under extensive conditions, is essential to ensure the health security of both parties, our ecosystems and our own. 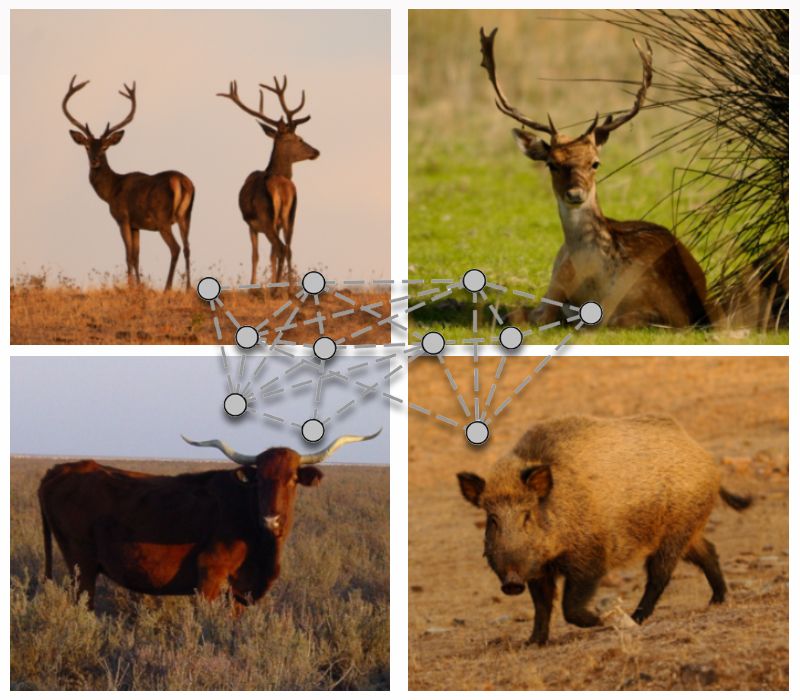 The red deer, the fallow deer and the wild boar are recognized as wild reservoirs of certain pathogens, which can be transmitted to the livestock maintained in free-ranging conditions in natural areas where they coexist.

In these cases, wildlife epidemiologists face especially complex scenarios, since there may be multiple species involved that can transmit the pathogens through various pathways associated with both direct (close contacts) and indirect interactions (through the environment or through vectors such as ticks).

Thus, the analysis of the existing social networks between the different wild and domestic species involved in an epidemiological scenario is essential to identify individuals and communities with relevant roles in the transmission of pathogens.

A scientific work led by the Instituto de Investigación en Recursos Cinegéticos (IREC – CSIC, UCLM, JCCM) has analyzed the dynamic network of interactions that occur in the complex epidemiological scenario that takes place in the Doñana National Park (Spain), where three species of wild ungulates (the red deer Cervus elaphus; the fallow deer, Dama dama; and the wild boar, Sus scrofa), which are recognized as wild reservoirs of certain pathogens, coexist with the cattle that is maintained in free-ranging conditions in this natural area. 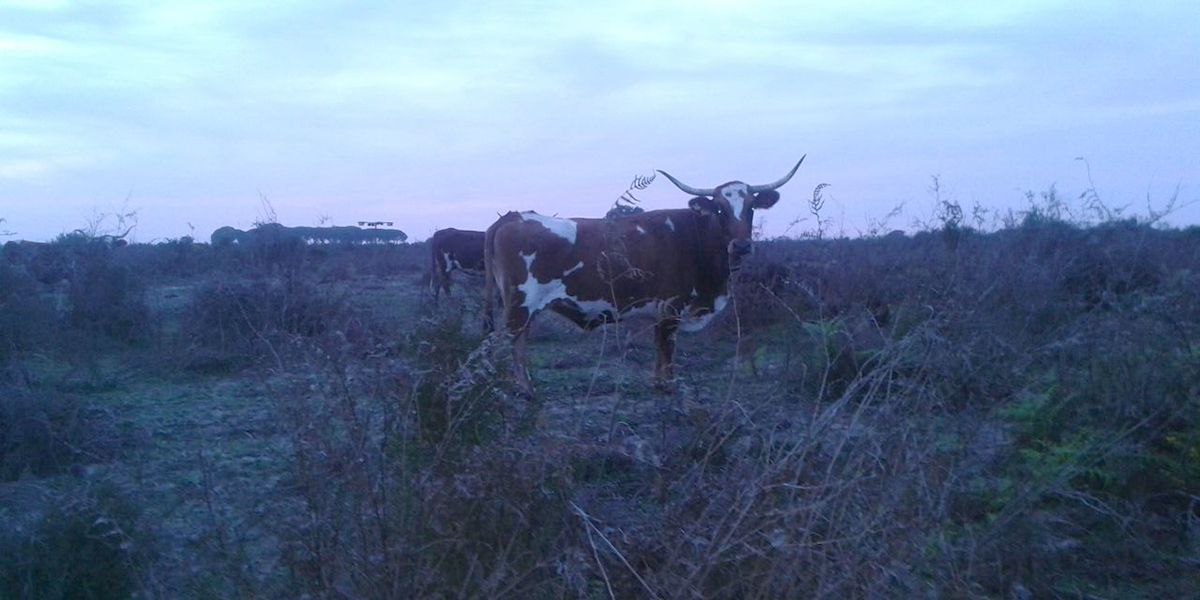 The “vaca marismeña” is an endemic breed of cattle that is maintained in free-ranging conditions in the Doñana National Park, where it shares the habitat with red deer, fallow deer and wild boar populations.

To that end, the scientists used the information collected through three complementary monitoring methodologies and simulated the spread of a pathogen within the global network identified. The methods used to identify interactions were GPS-collars, proximity collars and the monitoring of aggregation points (water and/or food sites) with proximity loggers (known as base stations). 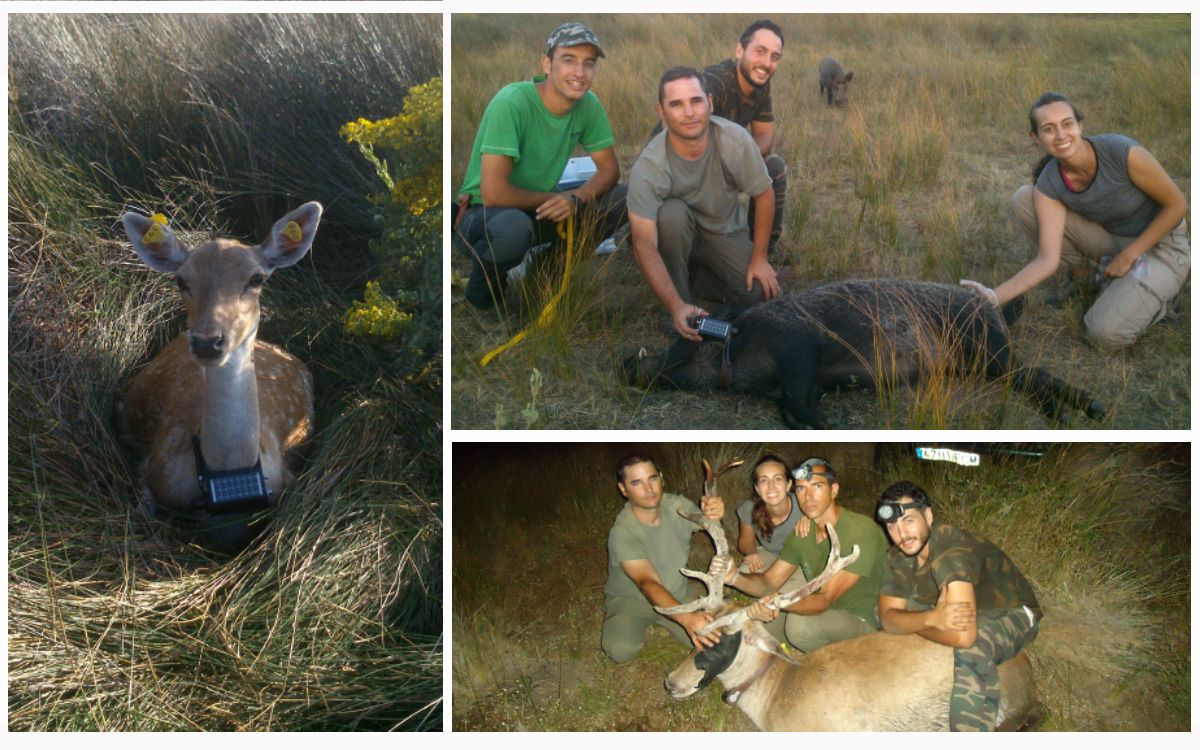 Several individuals of each species involved in this “social network” were captured and tagged with GPS and proximity devices, which were used to monitor the occurrence of interactions.

The global network showed a high connection between species through indirect interactions, which had an important seasonality. During the first weeks of the study there was a rapid interconnection between the monitored individuals, which suggests that an infected animal can introduce a pathogen into all species in a few weeks, especially in summer and autumn.

Results showed that most of the recorded interactions (more than 60%) took place in areas far from the aggregation points , such as water sites. These would be not recorded if only base stations were to be monitored, which would have lead to very different conclusions about the conformation of the network of interactions and therefore pathogen transmission. This fact highlights the need to study the potential pathways of pathogen transmission.

Four communities that included individuals of all the species were identified in the global network. This reveals the need of implementing biosafety measures aimed to reduce the risk of interaction between wild and domestic animals, and therefore risk of transmission, especially in environments altered by human disturbances that could promote the connection of host communities in free ranging populations.

Regarding pathogen transmission, the analysis showed that fallow deer and wild boar could have a key role in the maintenance and transmission of pathogens to cattle, especially during the summer.

As a whole, this work shows the need to consider different types of complementary methodologies in order to understand the complete functioning of the network of interactions in the wildlife/livestock interface. In addition, it provides a methodological approach applicable to the management of shared diseases between wildlife and livestock.