This is the conclusion of one of the first proteomics studies in deer antler, which has identified the proteins of the growing antler and those of the rib of the deer in a state of osteoporosis.

Deer antlers (Cervus elaphus) are the fastest growing tissue: they grow up to 1–3 cm/day and create more than 202/day of skin in the tips. For this reason, deer antlers are not only a model of biological regeneration, but could also have various applications in biomedicine.

The few studies on proteomics and gene expression in growing deer antler, almost all carried out in the last 2-3 years, have focused only on the tip, which is where it grows. However, the middle section of the antler is the one that mineralizes more intensively in medium and large animals.

For this reason, the Research Group in Animal Science Applied to Game Management of the Instituto de Investigación en Recursos Cinegéticos (IREC – CSIC, UCLM, JCCM), focused on deer biology under the leadership of Dr. Tomás Landete-Castillejos, has carried out a study in collaboration with scientists Daniel Franco and José M. Lorenzo, from the Centro Tecnológico de la Carne de Galicia, to identify and compare the proteins present in these two sections of the antler (the tip and the middle section) during its growth and in the ribs of the deer, since these bones undergo a process of natural osteoporosis while the antler is growing. 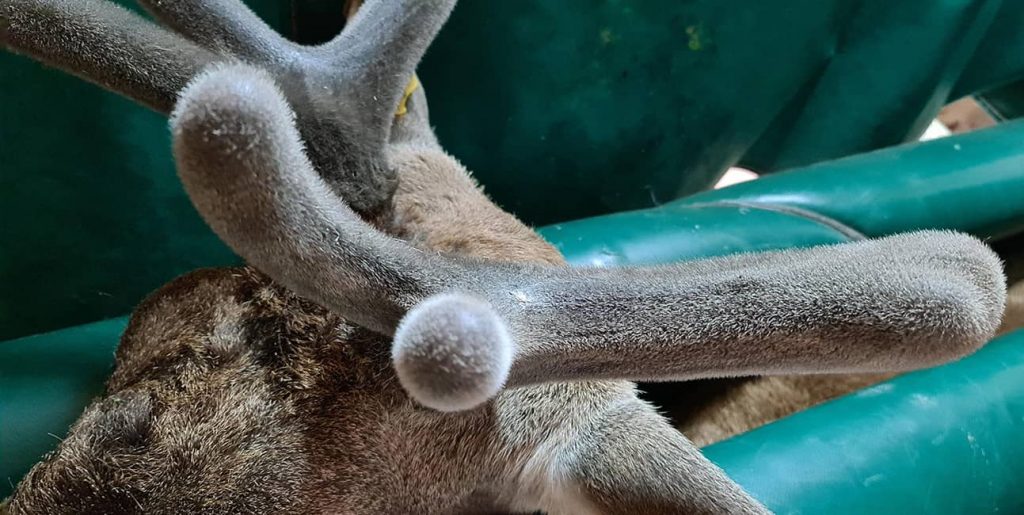 Antlers of red deer (Cervus elaphus) when they are growing.

A quantitative proteomic analysis, which studies which proteins are more abundant when comparing two samples, found 259 proteins more abundant in one section of the antler than in another, many of them unknown.

Although these results were expected, the most surprising findings of the study include the finding of 3 lipoproteins (Apolipoprotein A-II, Afamin –both in the middle section of the antler–, and a fatty acid-binding protein –FABP4– in the rib), which, as Dr. Franco points out, “are in a tissue that has practically no fat".

The authors' explanation is that they serve to capture signalling proteins for embryonic and organ development (the Wnt family), which are all lipoproteins. A coincidence between deer and human osteoporosis is also surprising, as Dr. Landete points out: "the FAPB4 protein was the second most abundant in deer osteoporotic rib, and we found in published studies that it corresponds to a gene that express in the osteoporotic bones of both deer and human osteoporosis patients”.

Another author, Dr. Chonco, points out another question: “Interestingly, among the many proteins with no known or unclear function, proteins such as the alpha-1B glycoprotein found in some types of human cancers have also been found in deer. We don't really know why. We discovered, in a study published at the beginning of the year, that the tip of the growing antler has anticancer effects against a brain cancer (glioblastoma), but in this study we have not found proteins that are candidates to explain these effects”.

Dr. Landete explains one of the benefits of investigating proteomics, gene expression and antioxidant capacity of growing deer antlers and osteoporotic bones: “both aging and many associated diseases are explained by the cumulative effect of oxidative stress, which is related to the metabolic rate. This speed is the highest in antlers, but this tissue manages very well to control the toxic effects of oxidative stress. Studying what is possibly the best antioxidant system could help other researchers to develop applications to delay the effects of aging or degenerative diseases”.