Researchers of IREC and the CNM-ISCIII discover that wild micromammals are relevant in the transmission of Coxiella burnetii, the bacterium that causes human Q fever and animal coxiellosis.

Animals are reservoirs of the bacterium causing Q fever, known by science as Coxiella burnetii, but these may also suffer the clinical consequences of the infection. Moreover, this disease may result in severe cases of acute hepatitis and pneumonia in humans. In some of the patients the infection may become chronical and result in valvopathies, endocarditis or chronic hepatitis/pneumonia that is known as post-Q fever fatigue syndrome.

Spain notifies 30% of all human Q fever cases reported to the ECDC by countries in the European Economic Area since the disease was declared of mandatory notification in 2015. On the other hand, in domestic animals, it is estimated that it causes around the 10% of the abortions of sheep and goats in Spain.

Previous studies conducted by the Research Group in Health and Biotechnology (SaBio) of the Instituto de Investigación en Recursos Cinegéticos (IREC – CSIC, UCLM, JCCM) have already demonstrated that wild animals, such as the red deer (Cervus elaphus) or the European wild rabbit (Oryctogalus cuniculus), maintain genotypes of C. burnetii that differ from those circulating in livestock and also that these wild animals are relevant in the transmission of the bacterium at the wildlife-livestock-human interface.

However, C. burnetii is additionally able to infect a very wide range of animals, but the knowledge of the wild animals that play a role in the ecology of C. burnetii is far from being the desirable to prevent and control schemes for this relevant zoonotic infection.

In this regard, the challenge is gathering the appropriate samples from wild animals to identify the role they play in the maintenance of C. burnetii and to estimate the risk they pose for humans and livestock, as well as the relevance of new and unknown potentially emerging genotypes of the bacterium potentially causing more severe manifestations of the infection in livestock and humans.

Thus, scientists of the SaBio Group and the Research Group in Game Resources and Wildlife Management of the IREC, in this case in collaboration with the Centro Nacional de Microbiología of the Instituto de Salud Carlos III (CNM-ISCIII), aimed to estimate the ratio of exposure to C. burnetii infection of different species of micromammals in Spain. 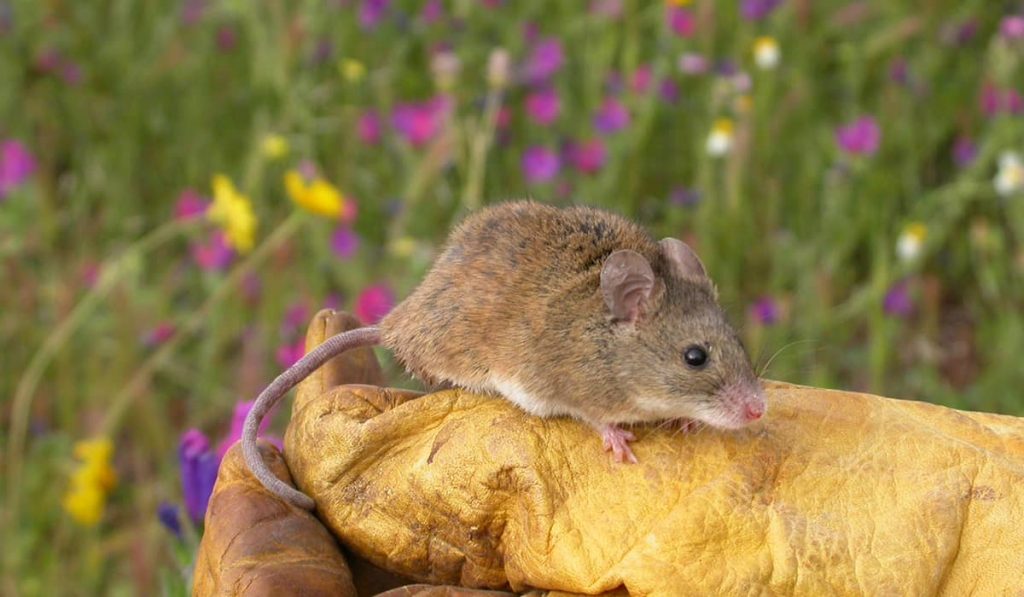 Sampling of a long-tailed field mouse (Apodemus sylvaticus) for the analysis of Coxiella burnetii.

Results of this study, which have been recently published in the scientific pee-reviewed journal Animals, show that around the 10% of the studied micromammals were infected with C. burnetii. The infection was found in common vole, wood mouse, greater white-toothed shrew and black rat.

The common vole, a pest species in the Northern Spanish Plateau that is also linked to the direct/indirect transmission of tularaemia to animals and humans, was the species displaying the highest infection prevalence with 11%. The study have also demonstrated that the common vole is able to shed the bacterium and thus transmit it to other animals and humans, as it is able to remain infective under harsh environmental conditions by forming spores. The bacterium could be genotyped in an infected common vole and it was the most prevalent genotype of C. burnetii in sheep and humans in Europe, the Genotype II+. 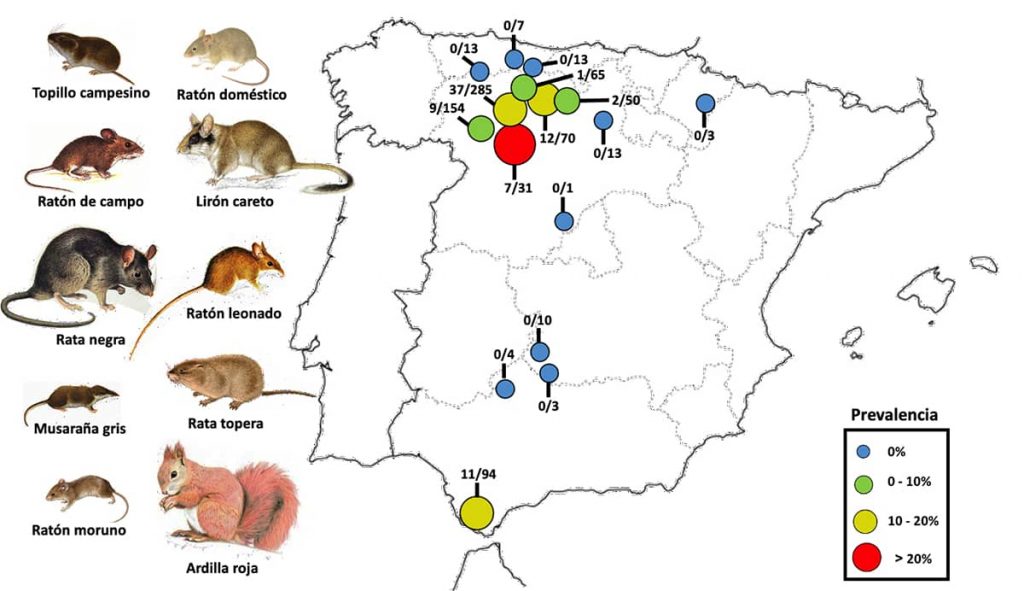 Map displaying the spatial distribution and infection prevalence of Coxiella burnetii in different species of micromammals. Numbers per point represent the counts of positive samples against the total number of samples analyzed.

One of the authors of the study was diagnosed from acute clinical Q fever after presenting to a hospital with malaise and persistent fever a week after field work, specifically capturing and sampling common voles. This researcher had no history of exposure to livestock and was busy with vole captures several weeks before the onset of the symptoms, what is suggestive of a wild micromammal source of infection.

This suggest that the biosafety items employed during vole captures, basically latex gloves, seems not to be protective enough against this bacteria , so the use of facial masks is advisable as well as extreme hygienic care when handling micromammals.