A typical deer agonistic interaction, such as pelt biting, could be used as an indicator of social or environmental stress in the management of red deer farms in order to detect situations in which animal welfare may be compromised.

In animal species that live in social groups, such as the red deer (Cervus elaphus), fighting/aggression behaviours among the members of a group are very important to establish a social rank that regulates access to limited resources, such as food, space or females during the mating season. This type of aggressive interactions, which define the dominant or subordinate role among the members of a group, are named agonistic interactions, and various stressors can affect their patterns of occurrence.

A study led by Dr. Javier Pérez-Barbería, from the Research Group in Animal Science Applied to Game Management of the Instituto de Investigación en Recursos Cinegéticos (IREC – CSIC, UCLM, JCCM), have analyzed the number of bites on the pelt of red deer due to interactions among individuals of the same group during 14 years as an index of agonistic interactions.

Results showed that the number of bites was related to the social rank of each animal, sex, group size and heat stress conditions. Thus, they showed that (1) the higher the social rank of deer, the lower the number of pelt bites received; (2) increasing heat stress conditions caused deer to suffer more pelt bites; (3) males received more bites than females; (4) the heavier the deer, the lower the number of bites on their bodies; (5) the bigger the group, the more bites exhibited on its members; (6) deer 5–6 years old suffered greater rate of pelt biting than younger or older deer; and (7) hinds that gave birth earlier in the parturition period suffered less pelt biting than those that gave birth around the peak of the parturition season.

This work and its results as a whole show that analyzing pelt bites in red deer can be a useful tool to detect situations in animal handling and management that may be compromising animal welfare. 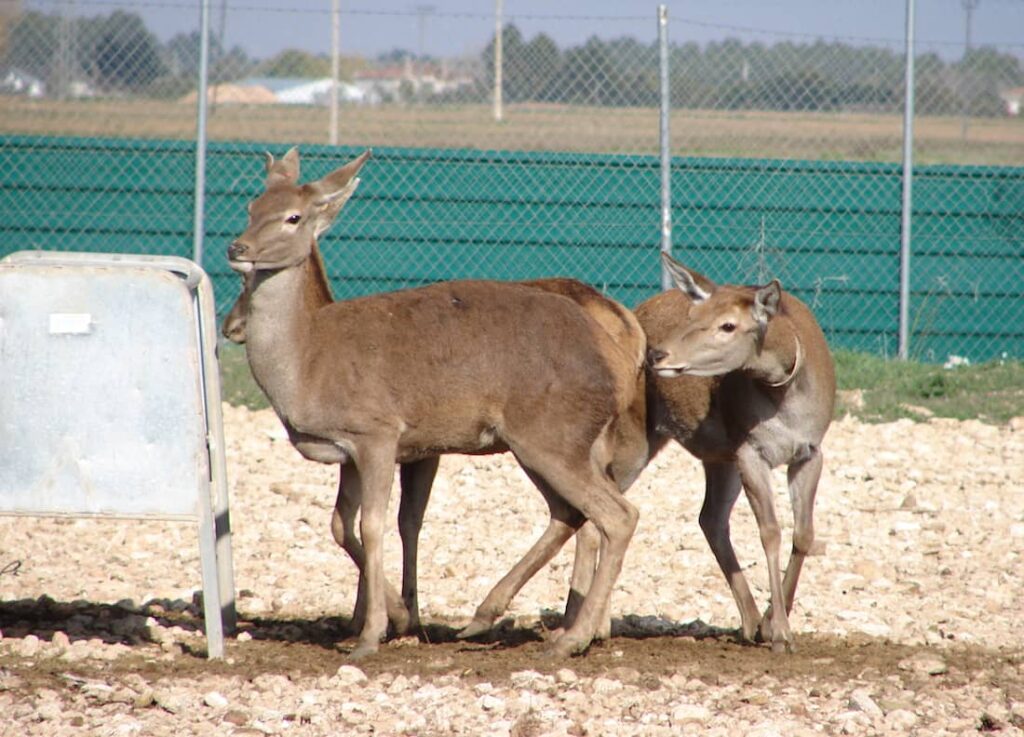 Social interaction showing the dominance of one female red deer of Iberian origin (Cervus elaphus) over another. The study was carried out at the UCLM experimental deer farm located in Albacete.

Dr. Pérez-Barbería highlights that “examining the amount of pelt bitten by red deer in the same group is a practical index for assessing animal welfare and detecting stressful situations under farm conditions. However, its usefulness in wild deer populations, where space and animal density are not critical factors, is very limited, because under these conditions this behaviour is not frequent”.

Regarding the usefulness of the study in farms and zoos, Dr. Andrés García indicates that “although the evaluation seems to be complicated, a trained veterinarian or manager can evaluate the bitten surface with a very detailed scale, as it has been in my case during these years managing the UCLM’s herd of deer. Such an expert could at first glance indicate management problems on the farms he visits”.

Finally, Dr. Tomás Landete points out a possible automation of the process: “currently, there are image analysis systems in animal production that can estimate parameters from the condition to even body weight or lameness. These companies could develop a similar system that calculates a rate of bites received and produces alarms of stressful situations. In addition to the 1 million deer on farms in New Zealand, almost half a million in the USA, or 300,000 across Europe, the 650,000 red deer in Spanish hunting estates could also benefit if an image analysis system were installed close to where food is offered to animals”.