The effectiveness of conservation plans for threatened wildlife species depends largely on knowing the number of individuals that make up their populations, their population dynamics and their conditioning factors. Conventionally, data on population abundance and trends are obtained from a single source of information, such as direct counts or changes in demographic parameters. But these methods neglect some of the information needed to properly understand the population as a whole, such as assessments of the non-breeding proportion of the population (which is critical for understanding population functioning) and the drivers of population change.

In the case of the Bearded vulture (Gypaetus barbatus), one of the most threatened birds in Europe whose wild populations are mainly concentrated in the Pyrenees, we only knew precisely its annual breeding population, thanks to the aforementioned conventional methods. However, despite transnational coordination and collaboration between administrations, the actual population status of the species has always been unknown... Until now.

Scientists from the Research Group in Game Resources and Wildlife Management of the Instituto de Investigación en Recursos Cinegéticos (IREC – CSIC, UCLM, JCCM) have led the development of an Integrated Population Model (IPM) to assess the population size and age structure of the entire Pyrenean Bearded vulture population at the whole population scale, and obtain estimates of survival and breeding parameters.

They used information on the reproduction and productivity rates of the Bearded vulture in the Pyrenees, collected in Spain, Andorra and France through a long-term study that began more than 30 years ago, and combined this information with monitoring data from 150 captured-marked-recaptured (re-sighted) individuals throughout the same period.

Results show a density dependent decrease in juvenile survival, productivity and adult survival, leading to reduced population growth with increased population size. According to Antoni Margalida, senior scientist at the IREC, expert on vultures, “the models indicate a total population of 937-1119 Bearded vultures, of which 36% belong to the reproductive fraction”. This reproductive fraction of the Pyrenean Bearded vulture population has experienced a geometric mean population increase of 3.3% annually, falling to 2.3% during the last 10 years. 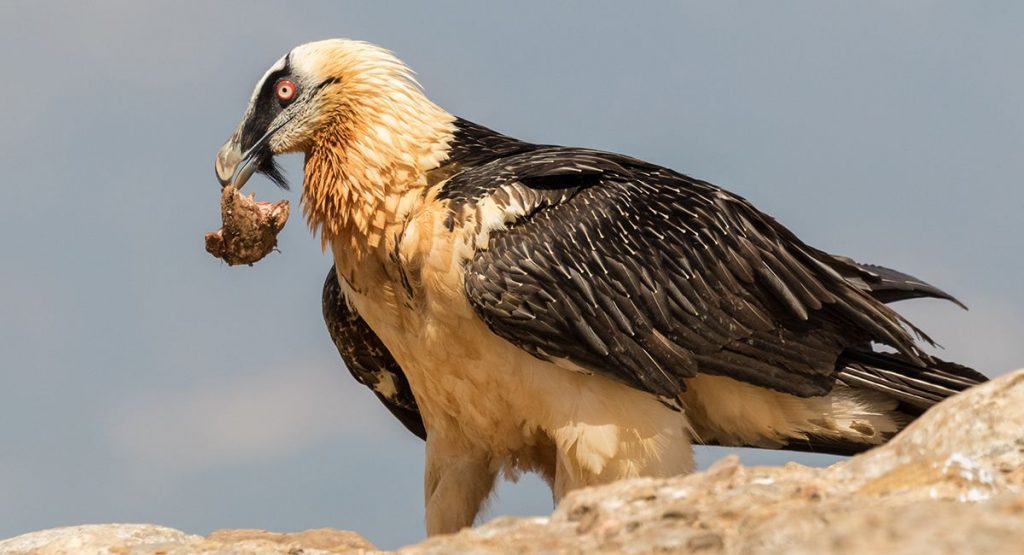 Unlike the rest of European vultures, the bearded vulture does not feed on meat, but on tendons and bones (Photo: Pilar Oliva-Vidal).

The study also shows that the adult proportion of the Pyrenean Bearded vulture population increased over time, from 61% to 73%. According to the researchers, the average age of reproduction of this scavenger bird is around 10 years, and polyandrous trios occupy 30-35% of the territories, which means that they are governed by two or more males and one female.

Furthermore, the authors highlight that this methodological approach has allowed the identification of important conservation issues related to the management of supplementary feeding sites and geographic expansion of the Bearded vulture population in the Pyrenees.