Relatively high levels of lead (Pb), arsenic (As) and thallium (Tl) in eagle owl nestlings from the surroundings of the former "Cartagena-La Unión" mining district warn of the risk that mining contamination poses to the conservation of birds

Some metals and metalloids, such as lead (Pb), mercury (Hg), cadmium (Cd) and arsenic (As), are well known for their high persistence, ability to bioaccumulate and the toxic effects they cause on wildlife exposed to high levels. However, exposure and effects of other minor elements and “rare earth” elements have been poorly explored.

The extraction and use of many of these trace elements are growing because they are becoming critical for the advancement of modern technology, thus it is very necessary to better understand their impact on ecosystems and their potential impact on wildlife.

This was the objective of a research work carried out by scientists from the Universidad de Murcia, the Universidad de Las Palmas de Gran Canaria, the Centro de Investigación Biomédica en Fisiopatología de la Obesidad y Nutrición (CIBEROBN) and the University of Turku (Finland), with the participation of the Research Group in Wildlife Toxicology of the Instituto de Investigación en Recursos Cinegéticos (IREC – CSIC, UCLM, JCCM), whose results have been recently published in the journal Environmental Pollution.

Birds of prey are good "sentinel species" of environmental contamination, thus scientists used Eagle owl nestlings (Bubo bubo) as a study model to assess the blood levels of a total of 50 mineral elements as a biomarker of exposure to environmental contamination by metals. Furthermore, in the blood plasma of the samples collected, they analyzed the levels of vitamin E and carotenoids as biomarkers of effect, since the physiological status of these nutritional components, which play a fundamental role in the growth and development of nestlings, can be affected from exposure to toxic elements. 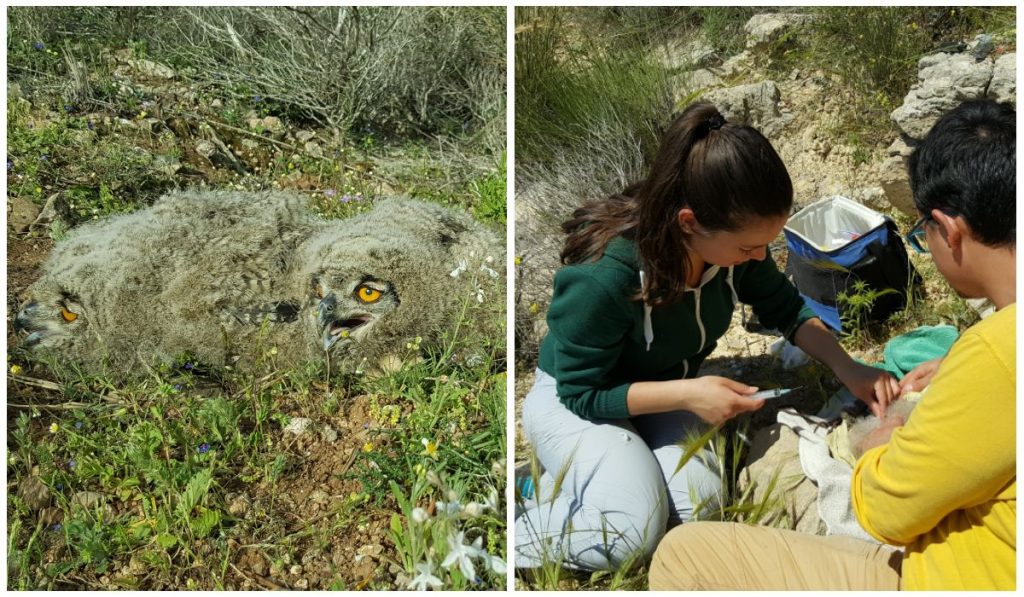 The Eagle owl (Bubo bubo) is a large nocturnal raptor, resident (non-migratory) and highly territorial. Studying nestlings, in addition to being easier than capturing and sampling adult individuals, allows identifying exposure to local contamination over a relatively short period of time (weeks).

Results clearly show that local metal contamination from the former mining district contributes significantly to the fact that Eagle owl nestlings in this area have blood levels of Pb, As and thallium (Tl) almost 20 times higher than those from the reference area. This increase in blood levels of Pb, As and Tl was positively associated with an increased concentration of vitamin E in the blood plasma. Vitamin E is one of the most powerful nutrients in the cellular antioxidant system, thus this observation can be interpreted as a protective physiological response to alleviate the oxidative effect caused by exposure to contaminating metals. 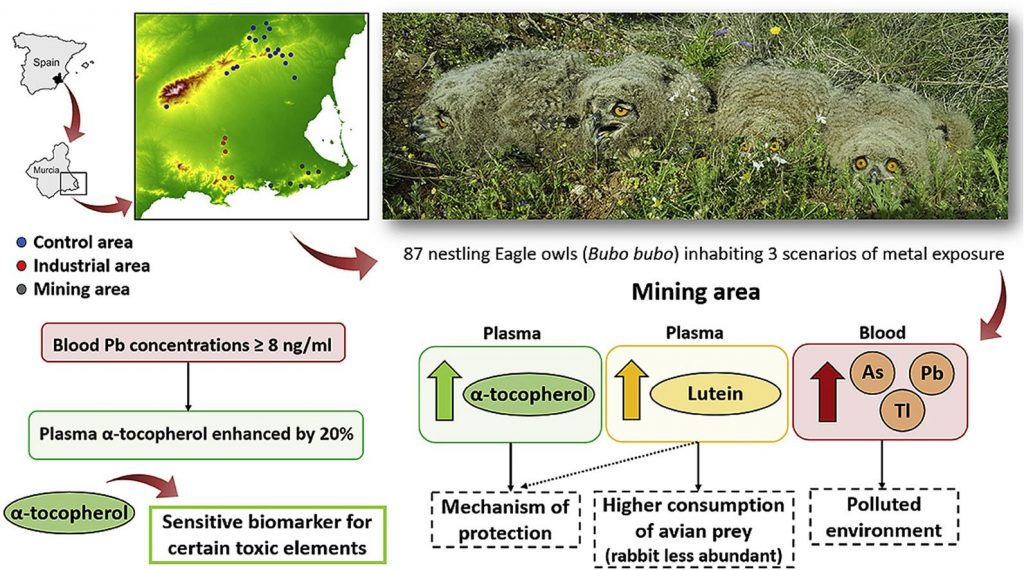 The study also shows higher plasma levels of lutein (the most abundant carotenoid in raptors) in Eagle owl nestlings from both the areas impacted by the former mining district and the industrial complex, which could be due primarily to differences in diet and/or prey availability compared to the reference area.

This work highlights the value of vitamin E as a biomarker of physiological effects associated with exposure to contaminating metals in birds. Furthermore, as demonstrated by a previous study with nightjars, it shows that metal contamination could constitute a threat to bird conservation in former mining areas. Finally, it provides valuable ecotoxicological information by establishing the baseline levels of exposure of a raptor to a total of 50 metal elements rarely evaluated.