Within the animal kingdom, parental care is the set of activities that progenitors develop to ensure offspring viability until they are able to fend for themselves to survive. Among the many strategies for parental care, most birds, including the Bonelli's eagle (Aquila fasciata), have developed a biparental care strategy, which consists of both females and males assuming a role in breeding, including those tasks derived from the vital construction of nests.

Raptors often use a wide variety of materials to build their nests, presumably due to their insulating properties, their suitability to advertise occupancy of the nest, and/or to decrease pathogen and parasite loads. In the case of the Bonelli's eagle, which is a monogamous species in which the male is smaller than the female, the effort devoted to nest building could be an indicator of parental quality, that is, of their greater or lesser chances of raising their chicks.

A study carried out by researchers from the Universidad de Murcia, in collaboration with the Research Group in Game Resources and Wildlife Management of the Instituto de Investigación en Recursos Cinegéticos (IREC – CSIC, UCLM, JCCM), has monitored 16 Bonelli's eagle nests over 5 years to study the relative contribution of the sexes in nest building, also considering factors such as the type of material brought to the nest, reproductive experience, nest quality and the time spent building the nest during the pre-laying period.

The results indicate that sex is not a determining factor in nest-building effort, and that females did not increase their parental effort in response to the male’s contribution.. On the other hand, the supply of materials did not increase during the pre-laying period. On contrary, the models show that (1) the type of material supplied to the nest by both sexes varied significantly throughout the pre-laying period; and that (2) nest-building effort was determined by individual experience and nest quality. 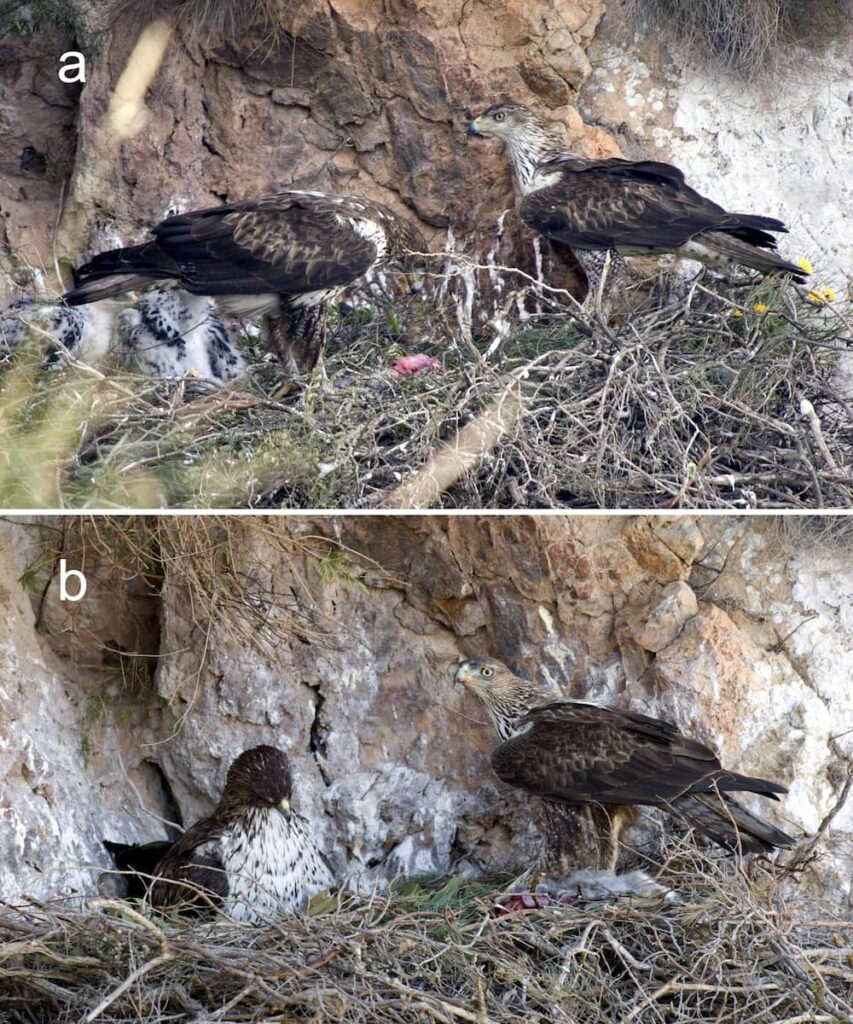 This suggests that male nest-building behaviour and, in general, the investment by Bonelli’s Eagles in this task, cannot be considered as an extended phenotypic signal, and therefore, it cannot act as an honest signal of parental quality..

The differential use of hard and green material by both sexes in the early and late stages of nest-building period, and the fact that the more experienced individuals contributed a larger amount of material on low quality nests, support the signalling of nests to other partners, as well as a functionality for decreasing ectoparasite loads during the pre-laying period.

This work represents an outstanding contribution to better understand the biology of a seriously threatened bird of prey, which will contribute positively to its conservation.