A larger size and an older age confer competitive advantages within the European vulture guild, establishing the basis for a dominance hierarchy during carrion exploitation.

In a biological community, competition is a form of interaction that occurs when individuals of the same or different species dispute a limited resource. It is a relationship in which all the actors involved (the competitors) are disadvantaged, since any of them would be more successful in obtaining the resource (and the associated benefits) if such a competition does not exist. Thus, competitors resolve competitive relationships through competitive exclusion -the best competitor expels or eliminates the worst competitor– or resource partitioning -competitors adapt to use the same resource in different ways-.

In nature, competition for limited resources, such us food, can generate complex networks of relationships between individuals, both at the intra- and interspecific levels, derived from evolutionary, morphological and behavioral adaptations of the species and population groups involved. This is the case of vultures, which specialize in feeding on carrion, an unpredictable and limited in occurrence in space and time trophic resource that, when available, concentrates several species of vultures at the same time and in groups of individuals of different sexes and ages. 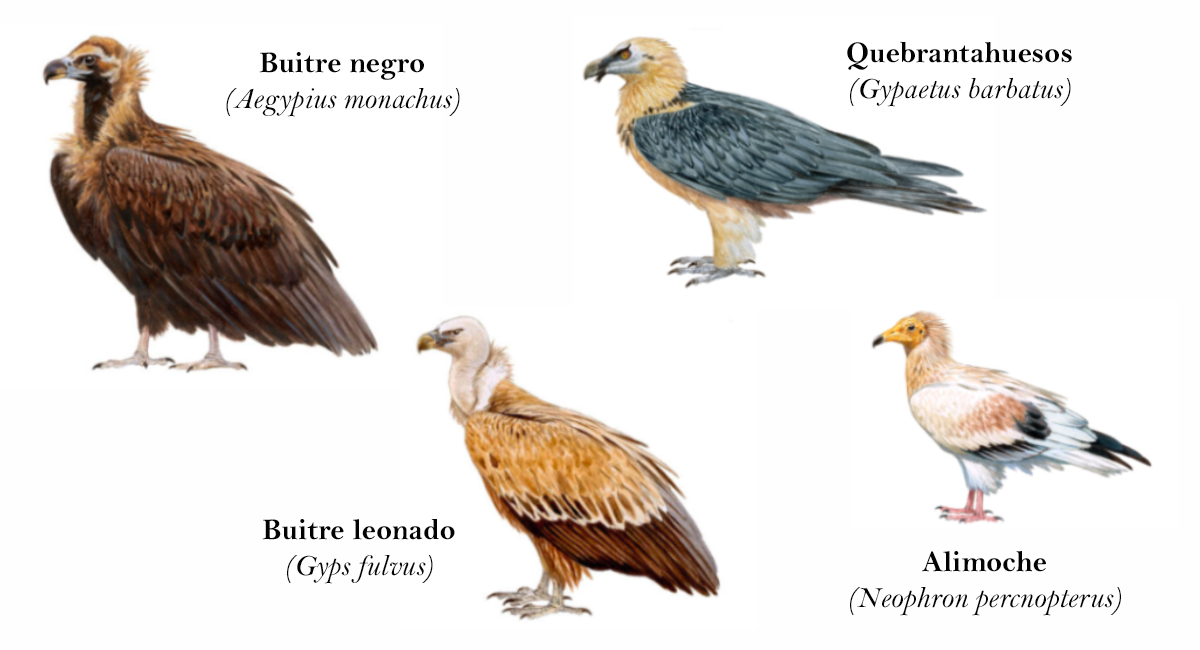 Because of this, the vultures have not only had to develop highly specialized morphological and physiological adaptations that allow them to feed on carrion (such as robust beaks, accurate visual ability to detect carrions, and digestive tracts capable of digesting rotten meat or bones and tolerate pathogens), but also have developed behavioral adaptations to optimize the exploitation of this trophic resource. These include agonistic behaviors, which consist in deploying aggressive actions against competitors and constitute a competitive advantage that results in the establishment of dominance hierarchies in the dispute for food.

Understanding how these hierarchical scenarios work is essential to better know the trophic ecology of our bird scavengers, which is an essential aspect for planning effective conservation strategies. Thus, scientists from the Ministerio para la Transición Ecológica y el Reto Demográfico of the Government of Spain, the Grupo de Estudio y Protección del Quebrantahuesos and the Instituto de Investigación en Recursos Cinegéticos (IREC – CSIC, UCLM, JCCM) have studied the behavioral and hierarchical organization within the guild of European vultures during carrion exploitation.

Unlike the rest of European vultures, the bearded vulture does not feed on meat, but on tendons and bones (Photo: Antoni Margalida).

Monthly over 2 years, the researchers provided animal carcasses in supplementary feeding sites for bird scavengers. The behavior of the vultures that came to feed was monitored by high-resolution video cameras, and the type of interaction between individuals selected randomly (fight/attack, displacement or stealing), the result of the interaction (success, failure or indifference) and the role of the selected individual in the interaction (aggressor or victim) were recorded. In addition, the individuals selected for the observations were classified by species and age group. 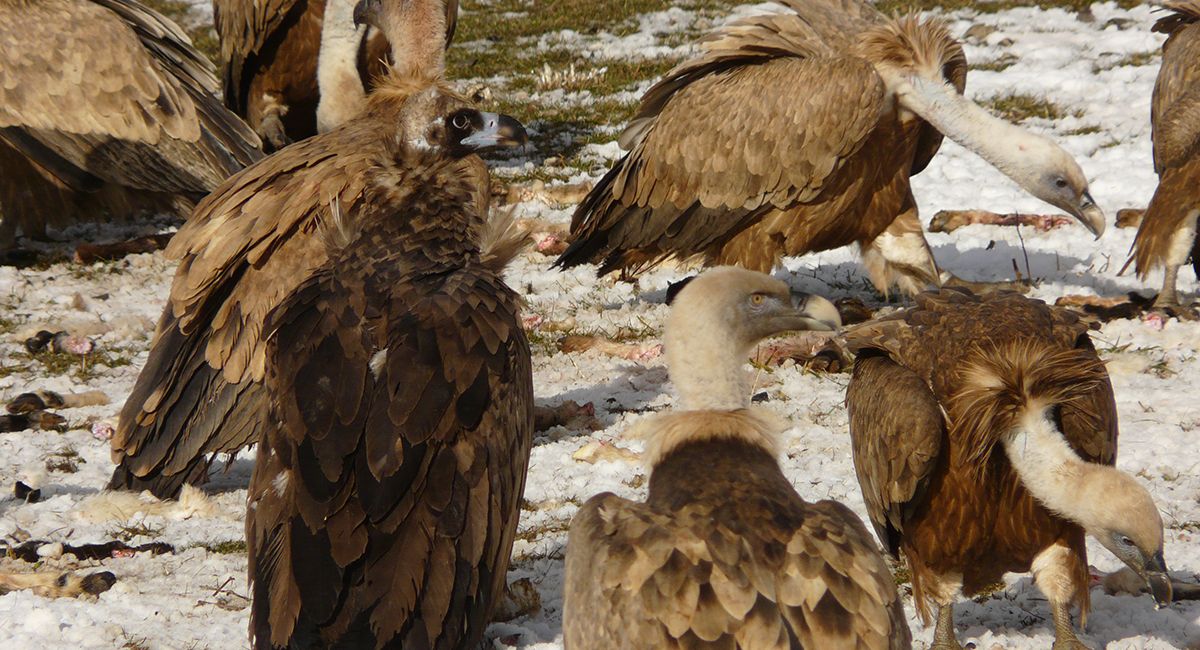 The cinereous vulture is the largest and most powerful pf the European vultures (Photo: Antoni Margalida).

The agonistic behavior most frequently observed was fight/attack, and cinereous vulture, the largest and most powerful of our vultures, was the one that showed the highest success rates in its interactions with other species, becoming the dominant species during carrion exploitation. The griffon vulture was next in the hierarchical scale, although it can take advantage over the cinereous vulture when it concentrates on large numbers around the carcass. On the other hand, the Egyptian vulture, which is our smallest vulture, was the most passive of the guild and the main victim of attacks or displacements by its older brothers, occupying the last position of the hierarchy. 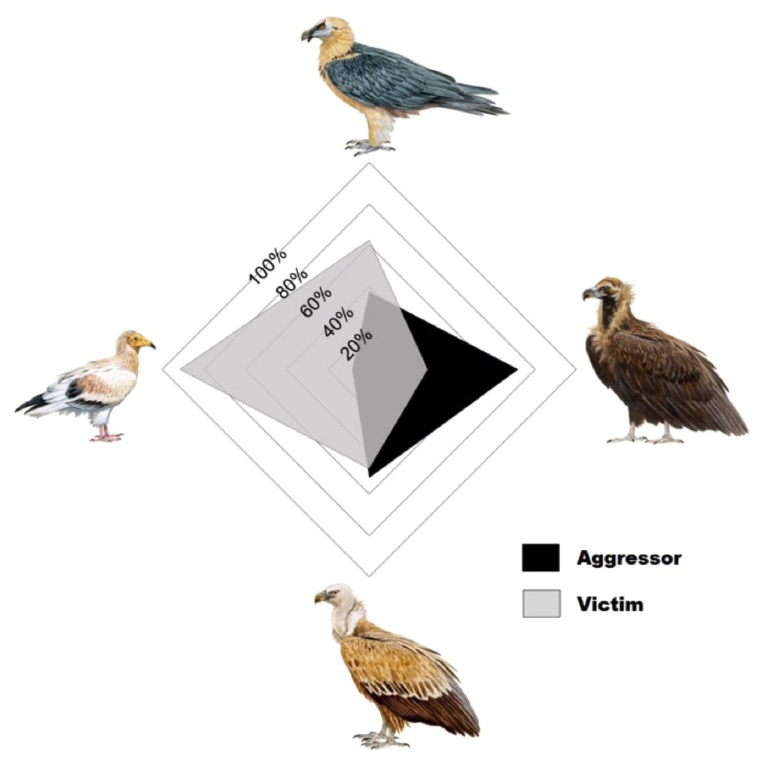 Role as aggressor or victim in the four European vulture species based on the proportion of agonistic interspecific interactions during carrion exploitation (Pictures courtesy of Juan Varela).

In all the species, juvenile vultures, which are subjected to the dominance of subadults and adults, engaged in fights more frequently both to con- and heterospecifics, possibly either because of their lack of experience or because their age class is more susceptible to starvation and is prepared to take greater risks. 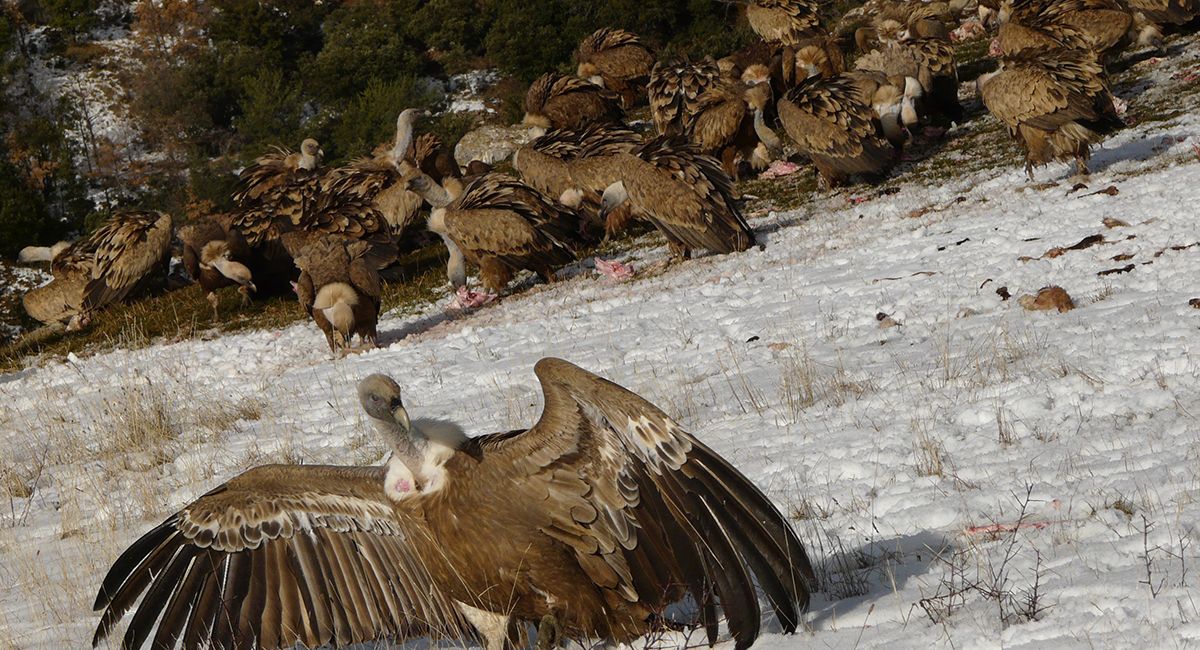 The griffon vulture can take competitive advantage over the cinereous vulture when it concentrates on large numbers around the carcass (Photo: Antoni Margalida).

Therefore, this research shows the existence of a despotic gradient of dominance in European vultures based on body size and age that goes from the largest to the smallest species and from adults to subadults and juveniles. This would explain why each species of vulture exploits carrion in different ways, establishing a balance between agonistic behaviors and resource partitioning during carrion exploitation. In addition, it shows that agonistic interactions are more aggressive when there was less food and when the number of vultures present was greater.

This is very novel information that will greatly contribute to the necessary conservation of our community of bird scavengers. All the details are provided in the scientific publication of this research, which is available at: