The red deer (Cervus elaphus) is one of the wild herbivores with the greatest spatial distributions in the northern hemisphere, where it performs a number of key ecological functions for the maintenance of ecosystems. However, its populations have increased and expanded over the last decades, which have generated health, economic and conservation conflicts.

Among the management tools that are available to reduce the impact of these conflicts, the use of food baits as vehicles to administer health treatments stands out above the rest. Baits are portions of food that may contain a vaccine or treatment against certain pathogens or parasites, with the aim of reducing the prevalence and/or transmission of infectious diseases affecting wildlife, livestock or humans; or even contraceptives that impair reproduction in order to control populations. It presents many advantages, since it can be a very effective tool, it is relatively easy to apply and it is well accepted by the various stakeholders. 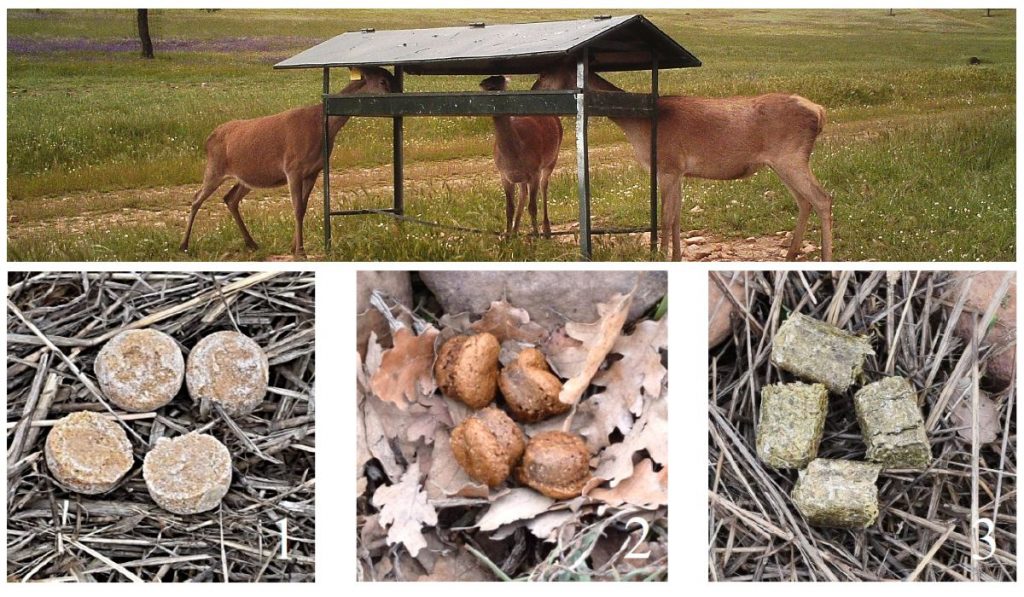 Scientists assessed the effectiveness of three different types of baits based on the composition of their food portion, which was made of feed (1), molasses (2) or alfalfa (3), which were released in the soil of through selective feeders, in hunting estates with a diverse array of wildlife management strategies in Castilla-La Mancha (Spain).

The challenge is to design the most appropriate strategy to achieve a truly effective application of food baits under real field conditions, that is, to ensure that baits are accepted (consumed) by the target species in order to receive the treatment they contain. This depends not only on the target wild species, but also on the management model of its populations, the type of bait and its specificity, its composition and palatability, and the form and season of the year in which the baits are supplied.

This was the objective of the Research Group in Health and Biotechnology (SaBio) of the Instituto de Investigación en Recursos Cinegéticos (IREC – CSIC, UCLM, JCCM) , which was addressed through a research study whose results have recently been published in the European Journal of Wildlife Research.

Results show that feed and molasses baits were the most desirable for the red deer, but alfalfa baits were the most specific for this species of wild ungulate. In fact, deer consumed up to 94% of alfalfa-based baits during summer. In contrast, feed and molasses baits were more attractive to other wildlife species, such as the red fox, the wild boar or the corvids, so their use could generate interferences in the specific delivery of treatments for red deer. 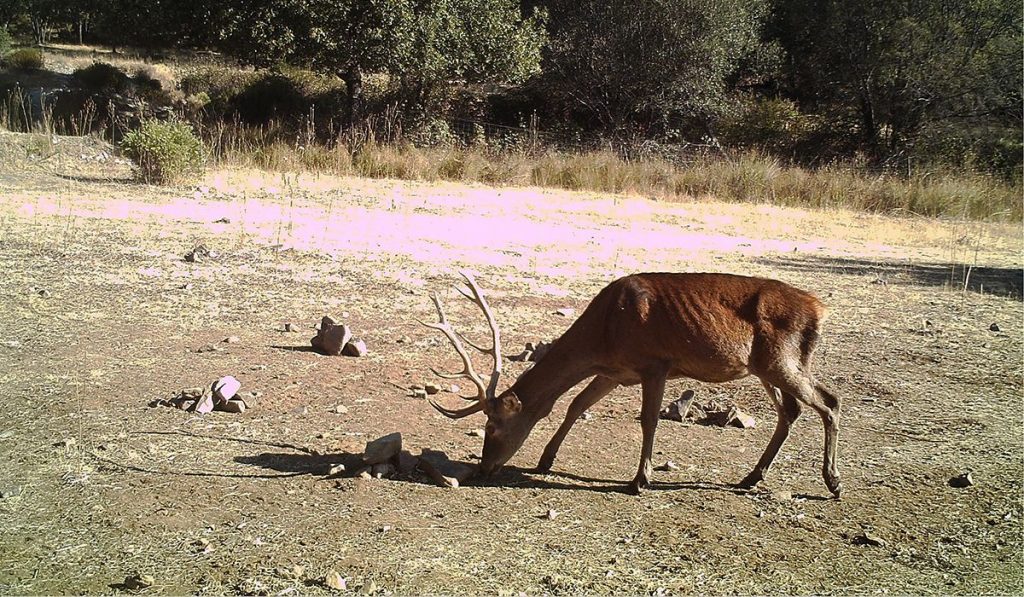 A red deer approaches a baiting point during late summer, when food resources in Mediterranean environments are scarce and wildlife must be bolder to get food.

The study also reveals that the use of selective feeders reduces the interference of non-target species and facilitates the specific treatment of adult males, females or fawns when necessary. Finally, it shows that the release of alfalfa baits in the soil during summer is a good method with high specificity for red deer (and other ruminants if they are present, such as the fallow deer, the roe deer or the mouflon) and with a high rate of bait consumption.

Everything suggests that alfalfa baits released during summer are attractive and specific enough to form the basis of a safe and effective strategy to administer vaccines and other oral health treatments to wild populations of red deer in Mediterranean environments.