Severe lead poisoning has been detected so far in thirteen species of birds of prey, three of them for the first time in this study.

Lead (Pb) poisoning constitutes a serious threat to the conservation of certain species of wild birds. Some of them, such as birds of prey, can be exposed to especially high levels of this highly toxic metal when inadvertently ingest Pb shot pellets or fragments of Pb bullets that, when used as ammunition for hunting, are embedded in game animals.

Monitoring the incidence of this threat in ecosystems, and identifying the factors on which it depends and its repercussions, is essential. To do this, integrating passive monitoring –based on the analysis of birds found dead in the field and/or admitted to wildlife rehabilitation centres– and active monitoring –based on the study of biomarkers of exposure and effect in live animals captured in the field– provides a comprehensive overview of the risk posed by Pb poisoning to birds of prey.

By combining both forms of monitoring, scientists from the Research Group in Wildlife Toxicology of the Instituto de Investigación en Recursos Cinegéticos (IREC – CSIC, UCLM, JCCM), in collaboration with the Instituto Regional de Investigación y Desarrollo Agroalimentario y Forestal (IRIAF) of Castilla-La Mancha and the Subdirección General de Biodiversidad Terrestre y Marina of the Ministerio para la Transición Ecológica y el Reto Demográfico (Spain), have revealed the existence of cases of clinical Pb intoxication in 5 species of birds of prey in Spain. For three of these species (the Bonelli's eagle, Aquila fasciata; the Northern goshawk, Accipiter gentilis; and the western marsh harrier, Circus aeruginosus), it is the first time that severe Pb poisoning has been documented. In total, clinical Pb poisoning has been detected in 13 species of birds of prey in Spain up to now. 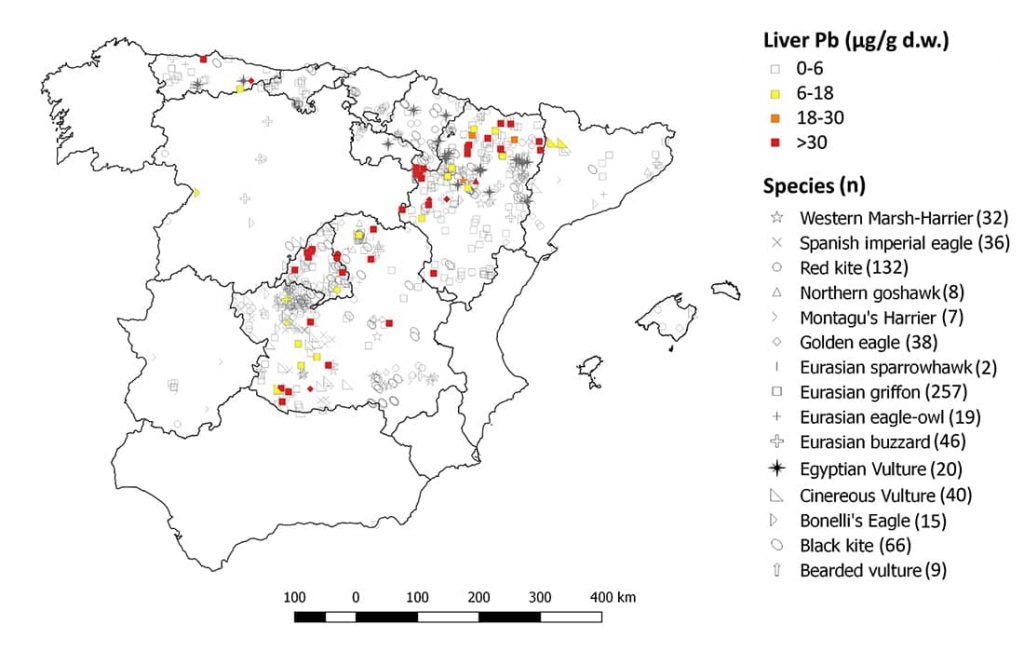 The passive monitoring of Pb poisoning in birds of prey was done by the analysis of liver (n=727) and blood (n=32) samples in individuals of 16 species found dead or sick in Spain between 2004 and 2020. The active monitoring included the analysis of blood Pb levels and several biomarkers of effect in live individuals (n=194) of 9 species of raptors captured in Spain between 2016 and 2017.

Specifically, results from this study show that 10.5% of Eurasian griffon vultures (Gyps fulvus), 0.8% of red kites (Milvus milvus), 10.5% of golden eagles (Aquila chrysaetos) and 12.5% of Northern goshawk analyzed through passive monitoring had liver Pb levels above 30 micrograms/gram dry weight, which are associated with severe clinical poisoning and are potentially lethal.

Furthermore, active monitoring showed that 33% of bearded vultures (Gypaetus barbatus), 73% of griffon vultures, 17% of Spanish imperial eagles (Aquila adalberti) and 6% of red kites had blood Pb levels exceeding 20 microliters/deciliter, which are abnormal exposures for birds from which sublethal effects may be expected. In Eurasian griffon vulture, blood Pb levels were associated with the inhibition of the enzyme delta-aminolevulinic acid dehydratase (ALAD) –a specific biomarker of Pb exposure–, lower concentrations of phosphorus in plasma and a higher degree of lipid peroxidation, a biomarker of cellular oxidative stress, which can be a precursor of negative subclinical effects in various systems, such as the immune or reproductive systems.

Results of this research place lead poisoning among the leading causes of poisoning in birds of prey in Spain, representing 8.1% of the severe or lethal poisonings confirmed. Furthermore, both forms of monitoring revealed a seasonal effect of Pb exposure, which was greater at the end of the general hunting season (between late winter and early spring) throughout the periods studied. This is because, although raptors can be exposed to Pb through several sources, the ingestion of Pb shot pellets or fragments of Pb bullets used as ammunition for hunting constitutes a significant source of exposure for species with scavenging habits or that prey on game species.

The authors of the work draw attention to the fact that, in Spain, the change towards non‑leaded ammunition in Spain has been limited to the ban of Pb shot pellets for hunting in protected wetlands since 2001 and some other initiatives to promote the voluntary use of non‑leaded bullets. However, in light of these results, the extension of the use of non-leaded ammunition to all forms of hunting would positively contribute to the conservation of birds of prey.

Roads do not influence the successful dispersal of the common vole