A multidisciplinary team of scientists is based on the rationale of the surface glycotope Gal(alpha)1-3Gal(beta)1- (3)4GlcNAc-R (alpha-Gal) to induce protective immune responses to test previously selected bacteria from the zebrafish gut microbiota with high alpha-Gal content, namely Aeromonas veronii and Pseudomonas entomophila, as probiotics as well as their biosafety and effectivity for the control of Mycobacterium marinum, the causative agent of fish tuberculosis.

One of the main challenges associated with probiotics design is the identification and characterization of the molecules and mechanisms associated with their function. In this context, the potential of the surface glycotopes, such as alpha-Gal, to induce protective immune responses makes them an effective target for the development of vaccines and probiotic/postbiotic interventions that need to be explored.

In this study, the zebrafish model was used (i) to assess the potential of alpha-Gal-rich probiotics for the control of mycobacteriosis including (ii) the study of associated microbiota and (iii) immune-mediated mechanisms. Then, native bacteria of the zebrafish microbiota, Aeromonas veronii and Pseudomonas entomophila, were selected for their high alpha-Gal content as potential probiotics for the control of Mycobacterium marinum.

These results are the first evidence of the effect of probiotics with high alpha-Gal content on eliciting protection against mycobacteriosis. And protective mechanisms regulating immunity and metabolism activated in response to alpha-Gal and probiotics with high alpha-Gal content were observed including modification of gut microbiota composition, B-cell maturation, anti-alpha-Gal antibodies-mediated control of mycobacteria, induced innate immune responses, beneficial effects on nutrient metabolism, and reduced oxidative stress. 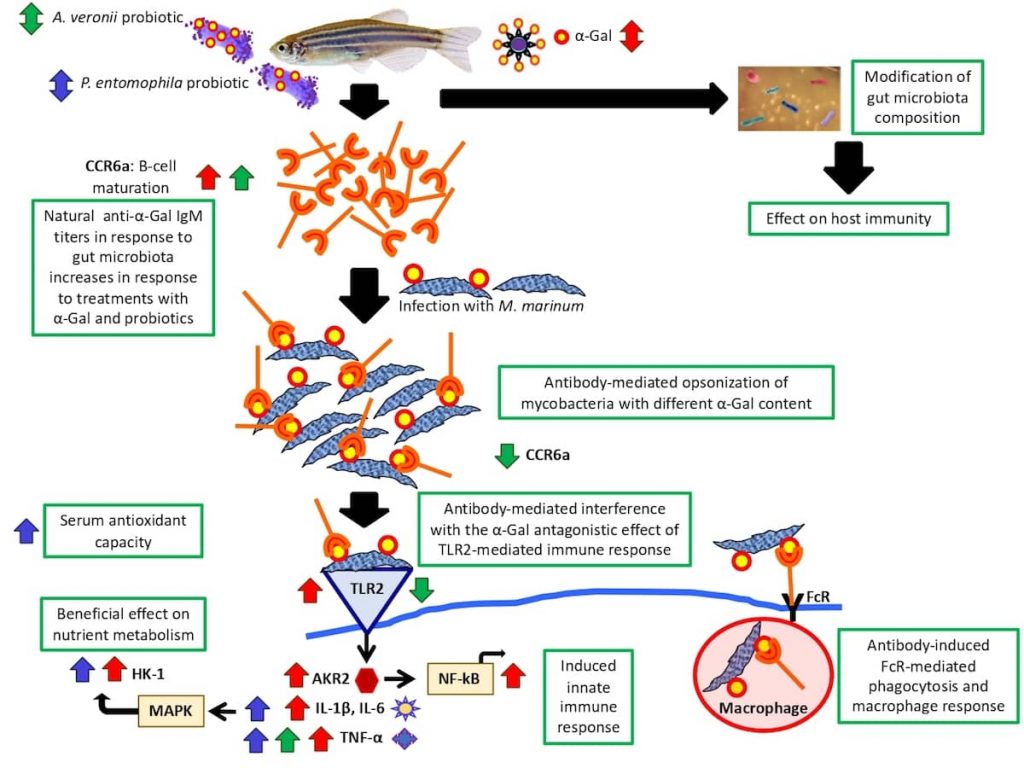 Protective mechanisms activated in response to alpha-Gal and probiotics with high alpha-Gal content.

The results have revealed that treatment with probiotic A. veronii and P. entomophila activated different mechanisms, but all associated with the response to alpha-Gal. While probiotic A. veronii with the highest alpha-Gal content promoted B-cell maturation, only probiotic P. entomophila produced beneficial effects on nutrient metabolism through HK-1 and reduced oxidative stress. Remarkably, both probiotic bacteria induced innate immune response through TNF-alpha upregulation.

It is crucial to acknowledge in future experiments the differences observed in the activated protective mechanisms and gut microbiota composition between probiotics and alpha-Gal to design combined probiotic treatments alone and in combination with alpha-Gal for the control of mycobacteriosis and other infectious diseases. These results can be translated into the development of probiotic interventions in dietary supplements applied not only to fish, but also to other animal species and to humans for the control of multiple pathogens.