This is the main conclusion of the first study on the dispersal, exploratory movements and territorial behavior of the Iberian lynx individuals reintroduced in Extremadura.

The analysis of dispersal, exploratory movements and territorial behavior of wild animals reintroduced in ecosystems offers valuable information to improve their adaptive management and the management of future reintroductions, increasing the success of conservation efforts.

In the Iberian Peninsula, the Iberian lynx (Lynx pardinus) is one of the wildlife species to which more conservation efforts are directed through reintroduction programs, which offers a unique opportunity to know the space-use behavior of reintroduced individuals, as well as their dispersal and exploratory behaviour in new environments with no previous settled population. 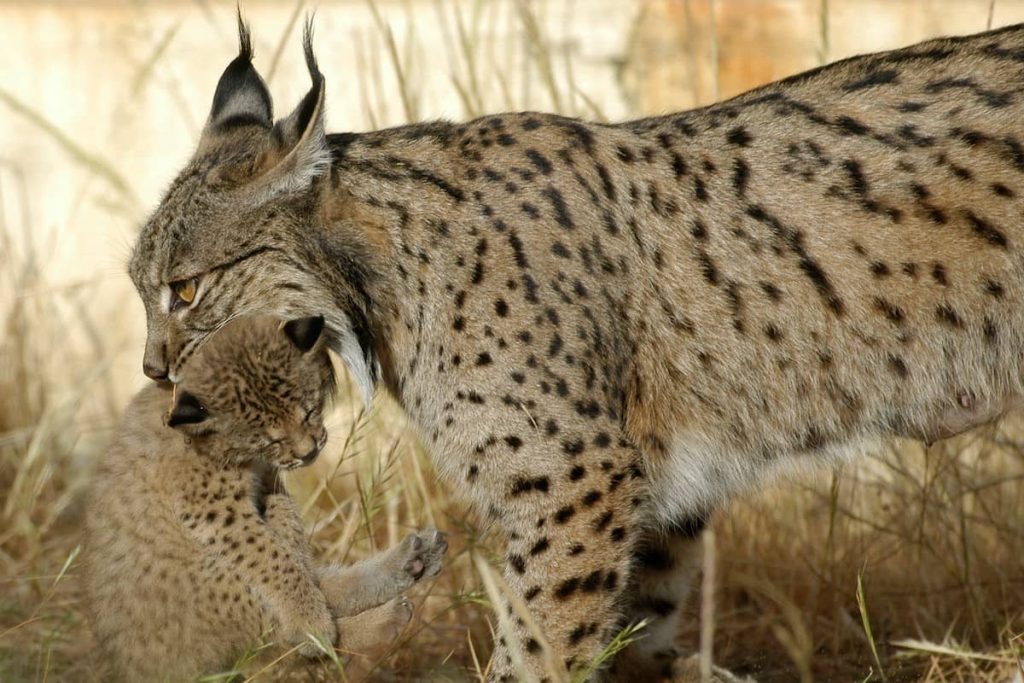 The Iberian lynx (Lynx pardinus) is an endemic mesocarnovore species in the Iberian Peninsula. Although it was widely distributed in the past, its numbers declined greatly during the twentieth century, with many local extinctions and a significant reduction in its historical range, reaching a critical situation with a maximum estimated population size below 200 individuals. As a result, it is target of a number of both in situ and ex situ conservation projects for the subsequent reintroduction of individuals in the wild (Photo: María José Pérez de Ayala).

This opportunity has been exploited by a group of researchers of the Fundación para la Conservación de la Biodiversidad y su Hábitat (CBD-Habitat), the Research Group in Game Resources and Wildlife Management of the Instituto de Investigación en Recursos Cinegéticos (IREC – CSIC, UCLM, JCCM) and the Directorate of Sustainability of the Regional Government of Extremadura, who analyzed spatial data from 32 lynx individuals just after their reintroduction in nature through captive breeding programs.

Their findings show that reintroduced individuals carry out exploratory movements that are sufficient to colonise and connect population nuclei within a radius of about 50 km of the reintroduction area. Although no significant differences were found between males and females on this regard, it was detected an effect of sex on the sizes of the territories established, as well as an inverse relationship between them and the time elapsed since release.

An Iberian lynx is released in its natural habitat within a conservation program of the species (Photo: Emilio Costillo).

The results also indicate that the size of territories during the early stages of reintroduction is not affected by rabbit abundance or lynx density. On average, the territories of reintroduced individuals were less stable than those previously described in natural populations.

As a whole, findings of this work suggest that the reintroduced population of Iberian Linx in Extremadura has successfully been established, although individuals took more than 5 years to stabilize their territories in the area. Exploratory movements of reintroduced lynx can be large and in any direction, even when there is still a lot of high quality habitat available, which should be taken into account when reintroducing terrestrial carnivores.