A study reveals a direct relationship between the mortality of individuals from poisoning and the reduction of the breeding population, even reaching local extinction, in the red kite, a bird of prey seriously threatened.

A research conducted by the Universidad de Oviedo, the Universidad Autónoma de de Madrid and the Instituto de Investigación en Recursos Cinegéticos (IREC – CSIC, UCLM, JCCM), in collaboration with WWF-Spain and SEO/Birdlife, demonstrates the existence of a direct relationship between the decline of breeding pairs of red kite (Milvus milvus) recorded in the national censuses of the species carried out in Spain over the last 20 years and the poisoning of wildlife registered in official statistics over the same period.

Many toxic substances, from illegally used poisons and legally used pesticides to veterinary drugs or the lead used in hunting ammunition, pose a major threat for biodiversity. These toxic compounds kill thousands of individuals of various wildlife species every year. In fact, the International Union for Conservation of Nature (IUCN) considers poisoning as one of the main threats to more than 2,600 animal species worldwide, including more than 240 species of birds of prey and carnivores. 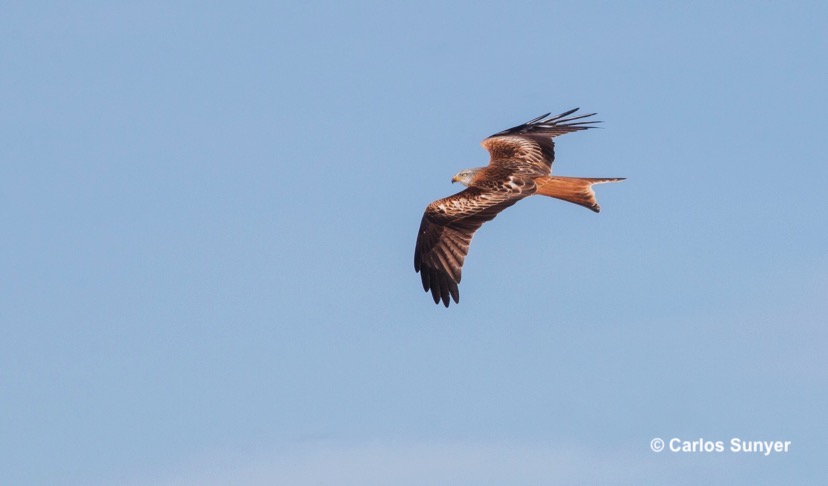 The red kite (Milvus milvus), easily recognizable by its forked tail, is among the wildlife species most frequently recorded in cases of poisoning in Spain (Photo: Carlos Sunyer).

Several examples illustrate the risk posed by toxic substances to wildlife, from the decline of falcons and other raptors in the 1950s related to the use of pesticides such as DDT or cyclodiene, to the most recent collapse of vultures in Asia owing to the consumption of carrion from animals treated with the veterinary compound named diclofenac. But despite the paradigm of these cases, the relationship between the intoxication of individuals and population declines has generally been established by combining intoxication data, collected in the field, with modeling and other indirect methods to infer population changes.

The difficulty of obtaining data in the field, both on the status of populations and on the mortality of individuals and its causes (especially in the case of illegal activities), greatly limits the establishment of more direct relationships, that is, the coincidence on a finer scale in space and time, between the mortality of individuals from non-natural causes and the decline of their populations, particularly over large areas.

The work, published in The Proceedings of the National Academy of Sciences (PNAS), the official journal of the United States National Academy of Sciences, demonstrates how the increase in poisoning of red kites in each locality (10 x 10 km grids) decreases the reproductive population of the species and increases its risk of local extinction, which also highlight the potential of the species as a sentinel of the impact of toxic compounds on biodiversity.

The study has used records of 1,075 red kites suspected of poisoning, of which more than 50% were confirmed as intoxicated with aldicarb and carbofuran, compounds whose use is currently prohibited in the European Union. These results highlight the great importance of the fight against poisoning –especially the illegal one, but also the legal one when substances such as rodenticides are involved– in the conservation of a species such as the red kite, classified in Spain as “Endangered”.

The research also represents an advance in demonstrating the direct relationship between the non-natural mortality of wildlife and the population decline of the species affected, something that until now had only been demonstrated using inferences or modeling, which are valid and relevant methods, but indirect. Demonstrating the existence of a direct relationship between the poisoning of individuals of a species and the decrease of its populations in the field can help to regulate the use of toxic compounds, since many cases of poisoning end in judicial disputes in which this relationship needs to be evidenced.

In this regard, the team of scientists authoring the work highlights the potential of the field data collected periodically and systematically, both through censuses based on the work of volunteers and NGOs and through official sources, when analyzing the impact of toxic compounds on wildlife populations.