A total of 23 scientific experts in the conservation of birds and bats, belonging to the Consejo Superior de Investigaciones Científicas (CSIC), various public universities and other research organizations, including the Instituto de Investigación en Recursos Cinegéticos (IREC – CSIC, UCLM, JCCM), warn in a letter published in Science that the current accelerated and uncontrolled process of expansion of solar and wind energy in Spain may end up producing irreversible damage to biodiversity.

If the multiple problems associated with the implementation of renewables are not addressed immediately, the energy transition will have the dubious privilege of being remembered not only for the change in the energy model, but also for jeopardizing some of the unique natural values of Spain.

The Spanish Government contemplates 89 GW of wind and photovoltaic solar energy in the draft of the Integrated National Plan of Energy and Climate (PNIEC) for 2021-2030. This prediction, however, has been overwhelmed. Despite the efforts of the Spanish Government to avoid a speculative bubble in the secondary market, there are already access permits to the network for projects representing 121 GW, which will be added to the 36 GW of renewables already installed, almost doubling the objectives of the PNIEC.

The new projects will affect low-cost soils, mostly marginal agricultural areas occupied by extensive cereal crops or mid-mountain areas, both with high ecological value. In particular, “photovoltaic projects, which occupy flat areas, can compromise the viability of steppe bird populations which are already seriously threatened and which find in Spain their last European or even global refuge. These populations are also mostly found in areas not covered by the Natura 2000 Network, so there are no legal tools that allow shielding them from the advance of energy macro-projects”, comments David Serrano, researcher from the Estación Biológica de Doñana (EBD-CSIC). 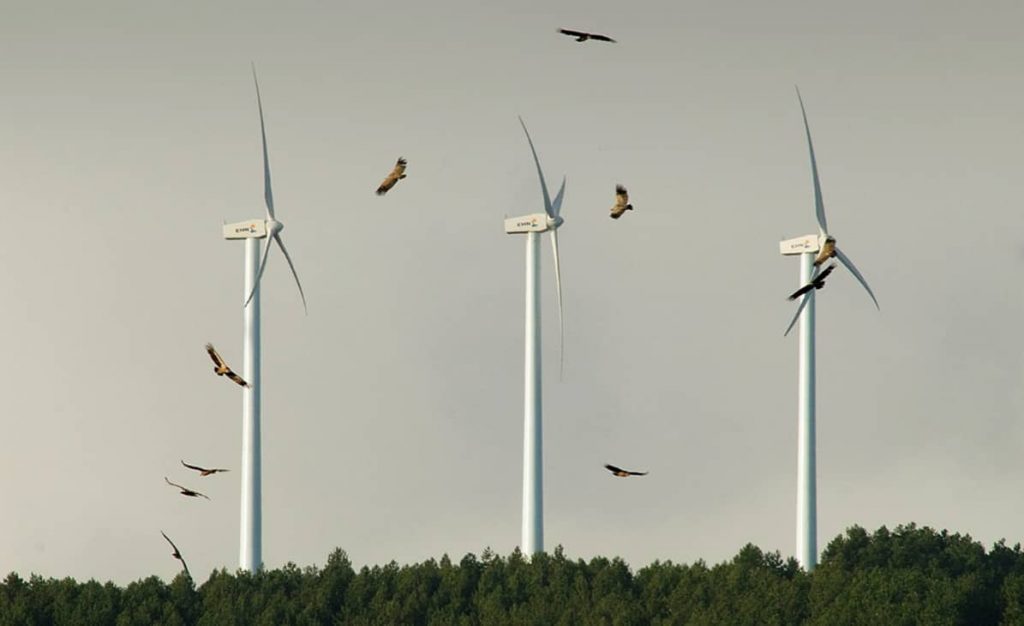 The impact that the loss of biodiversity associated with renewable energy projects can have on the ecosystem services it provides to society can be very important. Renewables are necessary, but their coexistence with biodiversity requires ambitious planning and good practices in environmental assessment processes (Photo: Iosu Antón).

It is known that poorly planned wind farms built in areas with large soaring birds can kill thousands of birds and put their populations at risk. For those species for which there is minimally adequate information, such as the griffon vulture, “it is estimated that the annual mortality in Spanish wind farms can approach a thousand specimens”, says the Juan Manuel Pérez-García, researcher from the Universidad Miguel Hernádez de Elche.

Many other species, some of them seriously threatened, also die in wind farms. It is difficult to know the true magnitude of the problem because monitoring efforts are often poor. Thus, “the number of dead bats in these facilities is estimated to exceed that of birds, and affects a minimum of 200,000 individuals/year”, comments Carlos Ibáñez, researcher from the EBD-CSIC.

These negative effects arise from poor planning, often based on information that is not updated or scientifically verified and that is generated by the same beneficiary companies of the energy projects. The same occurs with the monitoring protocols, which are usually carried out by the companies themselves, often with very little supervision by the administrations. On the other hand, the systems that are being used as deterrents for birds and bats have been shown to be of doubtful effectiveness. The researchers emphasize that the most effective today is to avoid locations in areas of high biodiversity and to stop the turbines when high mortalities are detected.

The signatories of this letter highlight their strong support for renewable energies, but advocate a more planned and rational process, without habitual bad practices such as the fractioning of projects, and based on the technical and scientific knowledge generated and verified independently of companies and promoters. They also advocate a stronger green commitment, with more distributed and decentralized energy policies, which are committed to efficiency, demand management, energy savings, self-consumption and the improvement of energy performance in buildings, since all this would reduce direct environmental impacts on biodiversity.

The scientists urge the central and regional administrations, responsible for the management of the territory and biodiversity, to “become aware of the enormous conservation problems associated with the way things are being done, which must be corrected immediately if we really want these energies to be green”, concludes José Antonio Donázar, researcher from the EBD-CSIC.

The full text of the letter published in Science is available at: