The use of landfills as foraging areas by white storks (Ciconia ciconia) is a well-known behaviour for years. In fact, the adaptation of storks to take advantage of our urban household waste has been one of the main causes of its population recovery in Spain after its decline in the mid-20th century.

Landfills have the advantage of being a predictable and easily accessible food resource. However, foraging in landfills can also have disadvantages, including possible physical damage owing to the presence of plastics, glass and metals, the exposure to certain chemical pollutants, the shortage of certain essential nutrients and the presence of potentially harmful microorganisms.

Previous studies have demonstrated the effect of the use of this food resource on the population dynamics of white storks, for example, in form of higher breeding success by allowing the occupation of the better nesting locations and spend higher efforts and energy in mating and in the care of nestlings during the breeding period. However, there is a lack of information about the possible direct impact of this behaviour on the health status of individuals. 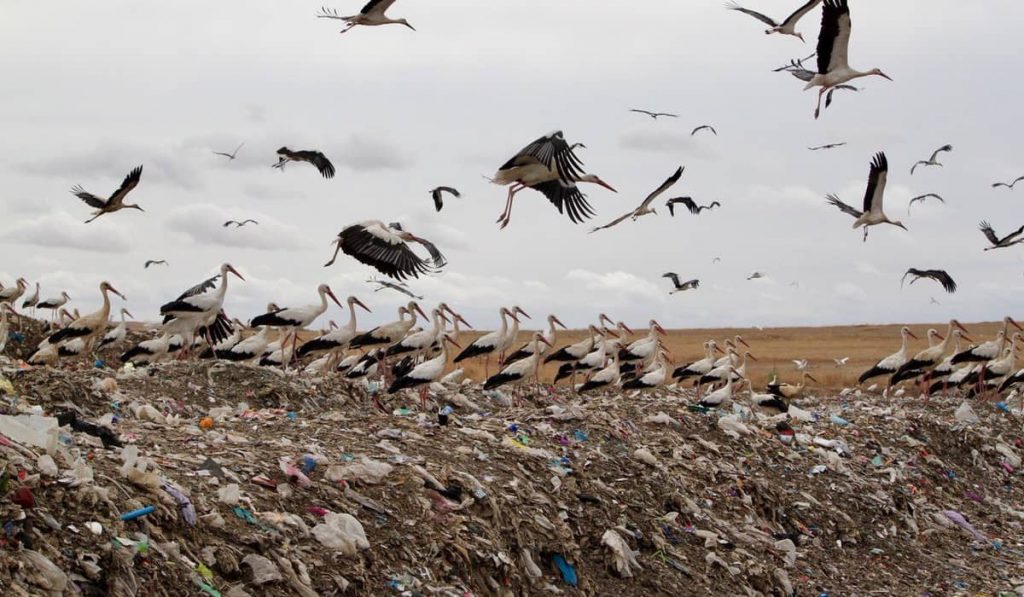 The use of landfills as foraging areas by white storks (Ciconia ciconia) is a well-known behaviour for years. However, there is a lack of information about the possible direct impact of this behaviour on the health status of individuals.

A multidisciplinary team of scientists composed of researchers from the Research Group in Health and Biotechnology (SaBio) of the Instituto de Investigación en Recursos Cinegéticos (IREC – CSIC, UCLM, JCCM), in collaboration with researchers from the Universidad Complutense de Madrid (UCM), the University of Groningen (The Netherlands) and the Instituto Regional de Investigación y Desarrollo Agroalimentario y Forestal (IRIAF), have evaluated the potential effect of the use of landfills as a food source on the physiological and health status of white stork nestlings, analysing their nutritional status, body condition, several blood parameters, oxidative stress balance and the presence of intestinal pathogens.

In order to establish comparisons, the scientists studied nestlings from different colonies of white stork whose adult individuals make a differential use of landfills, establishing four categories or gradients: in one of the studied colonies, adult storks mostly feed inside a National Park; in other, adult individuals feed in a natural area with extensive sheep farming; in other, adult storks feed in a landfill site that was sealed in 2007; and in other, storks forage in an open active landfill site.

Results have shown that stork nestlings whose parents use landfills as food resources had higher levels of cholesterol, albumin, and triglycerides in plasma than those whose parents feed on natural resources, providing a better body condition and nutritional status.

Finally, stork nestlings whose parents use landfills as food resources had a higher prevalence of multiresistant phenotypes of Escherichia coli. This result suggest an impact on the level of resistance of the intestinal bacterial microbiota or the acquisition of antibiotic resistant bacteria through landfill foraged food, which could confirm the role of white storks using landfills and foraging areas as vectors for the dispersal of antibiotic multiresistant bacteria. 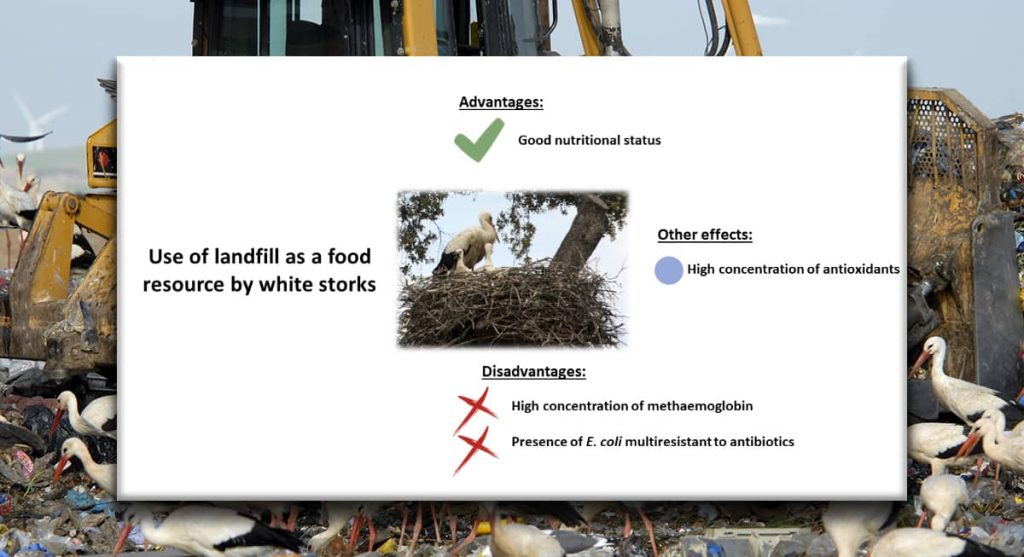 Graphical abstract of the research work

This work highlights that white stork nestlings fed with food from landfills present a better nutritional status and body condition than those fed with natural food resources. This seems to indicate that, despite the potential health impacts derived from a higher blood level of methaemoglobin and a higher prevalence of intestinal mutirresistant bacteria, this type of artificial diet has proven to be relatively beneficial at individual level for the white stork.