An experimental study based on realistic field scenarios shows that the ingestion of cereal seeds treated with the fungicide tebuconazole reduces the reproductive success of granivorous birds, which represents a high risk for their conservation.

The use of pesticides is one of the main threats to the conservation of birds that live in agricultural environments, since in these habitats, a very common practice is to treat sowing seeds with insecticides and fungicides. Many birds use these treated seeds as a food source, especially when other food resources become scarce, since much of them remain on the surface of agricultural fields after sowing, and this can pose a health risk for them.

In the past, the use of highly toxic products in the treatment of sowing seeds caused high mortality rates in birds. These products have been progressively withdrawn from the market, being replaced by others with lower acute toxicity. However, in certain areas, it is common for the sowing season to last for weeks or months, giving birds access to these seeds for long periods of time and posing a risk of chronic exposure with sublethal effects that can end up affecting their populations. 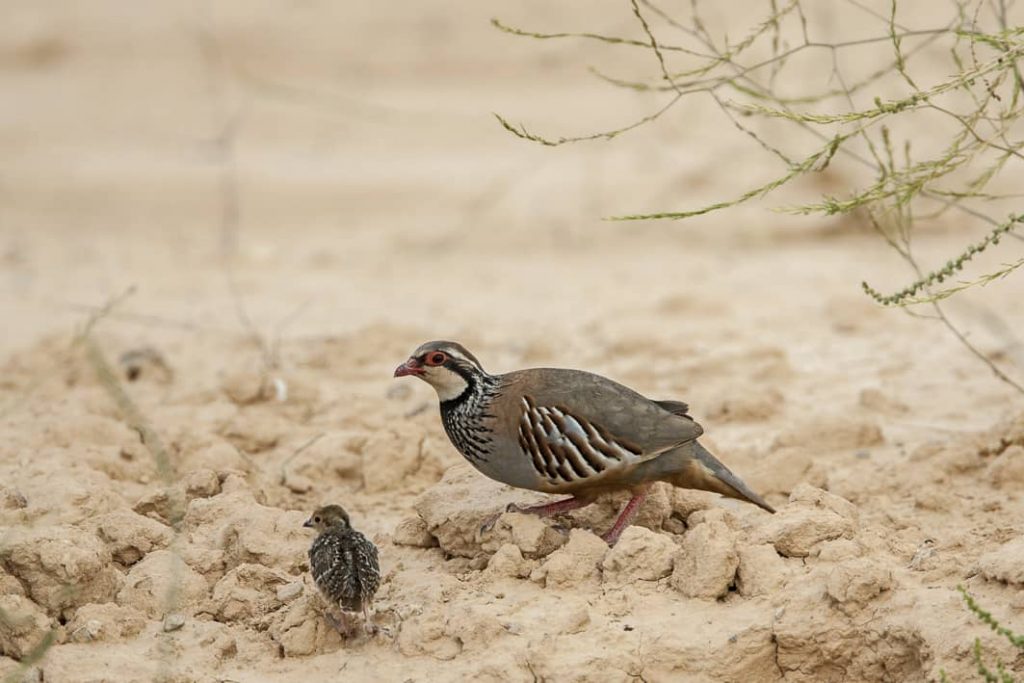 The ingestion of treated seeds may pose a health risk for granivorous birds that, such as the red-legged partridge (Alectoris rufa), inhabit agricultural environments (Photo: Mariano Cebolla).

A family of pesticides widely used for the treatment of cereal seeds are triazole fungicides, of which the most widely used in Spain is tebuconazole. In mammals, several studies suggest that this compound alters the levels of steroid hormones with negative consequences for reproduction. In birds, a previous work of the REGRESEEDS Project conducted by the Instituto de Investigación en Recursos Cinegéticos (IREC – CSIC, UCLM, JCCM), already pointed out that the same type of hormonal disruption occurred after the exposure of red-legged partridges to seeds treated with this compound.

Now, researchers from the University of Antwerp and the Research Group in Wildlife Toxicology of the IREC have carried out an experiment to understand the mechanisms of action of tebuconazole and the consequences of its exposure on the reproduction and survival of birds, using the red-legged partridge (Alectoris rufa) as a study model. To do this, they exposed different pairs of partridges at levels that simulate two realistic exposure scenarios (low and high exposure), which were previously validated in the field, and studied their impact on multiple physiological and reproductive factors.

The results have revealed that the partridges subjected to a high exposure to seeds treated with tebuconazole –a scenario simulating that the feeding of the partridges consists only of treated seeds for 25 days– presented reduced levels of cholesterol and triglycerides in plasma, while partridges subjected to a low exposure –a scenario that simulates 20% of treated seeds in the partridges' diet for 25 days– had reduced triglyceride levels. Cholesterol is the metabolic substrate for the production of steroid hormones, thus these effects can lead to endocrine disruption and, therefore, can have consequences on reproduction. In addition, cholesterol is an important component in the egg of birds, being necessary for embryo development.

These consequences for reproduction were confirmed by evaluating the reproductive success of the pairs of partridges two and a half months after the end of the exposure to treated seeds. In this case, the results revealed that pairs subjected to a high exposure to tebuconazole had a lower hatching rate of fertilized eggs, or in other words, a higher embryo mortality. This, along with a trend to produce smaller clutches, resulted in significantly smaller brood size in these pairs compared to control pairs. 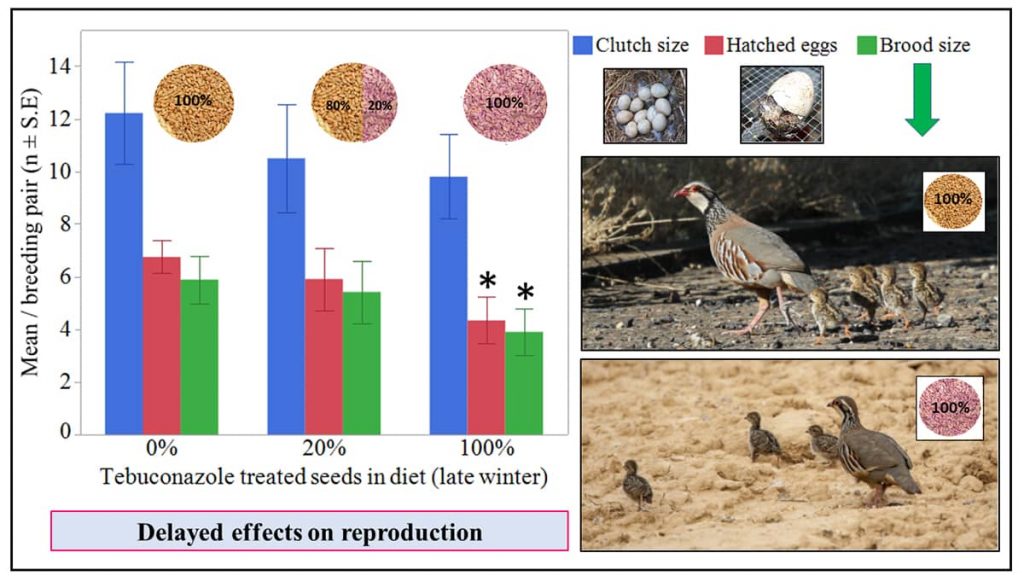 Graphical abstract of the research work, showing the effect of tebuconazole on the reproductive success of the experimental partridges.

The findings of this study should be considered in combination with those obtained in previous field studies, in which it has been observed that cereal seeds represent an average of 53.4% of the biomass ingested by wild partridges at the time of sowing, being able to reach up to 89% in certain regions. In the present work, both the time of exposure to tebuconazole and the duration of exposure occurred in accordance with what happens in real field conditions, thus the results obtained indicate that the use of tebuconazole treated seeds represents a high risk for the conservation of granivorous bird populations. These results are of great importance for the correct regulation of this and other similar pesticide compounds.