At the beginning of the New Year 2021, everybody is now aware that global warming –the accelerated increase in the average surface temperature of the earth– and the climate emergency situation to which it has given rise, influence the ecophysiology and behavior of living organisms and the ecological processes on which they depend, which can have a significant impact on the reproductive success or survival of animal and plant communities and populations. Thus, identifying reliable predictors of species resilience or susceptibility to climate warming is critical to assess potential risks to biodiversity.

In the case of birds, molting is one of the critical phases of their biological cycle. Owing to its seasonal nature, the timing of birds’ moult could be conditioned by global warming, and this might affect their annual cycle by influencing their reproductive success and population dynamics, as well as potentially having serious repercussions for the functioning of trophic chains and ecosystem flows.

The study of this hypothesis by scientists from the Universidad de Lleida and the Research Group in Game Resources and Wildlife Management of the Instituto de Investigación en Recursos Cinegéticos (IREC – CSIC, UCLM, JCCM) has allowed the development of a conceptual, analytical and practical method to evaluate the impact of global warming on ecosystems, through the analysis of the end of moult in bird populations and by using the red-legged partridge (Alectoris rufa) as a study model. 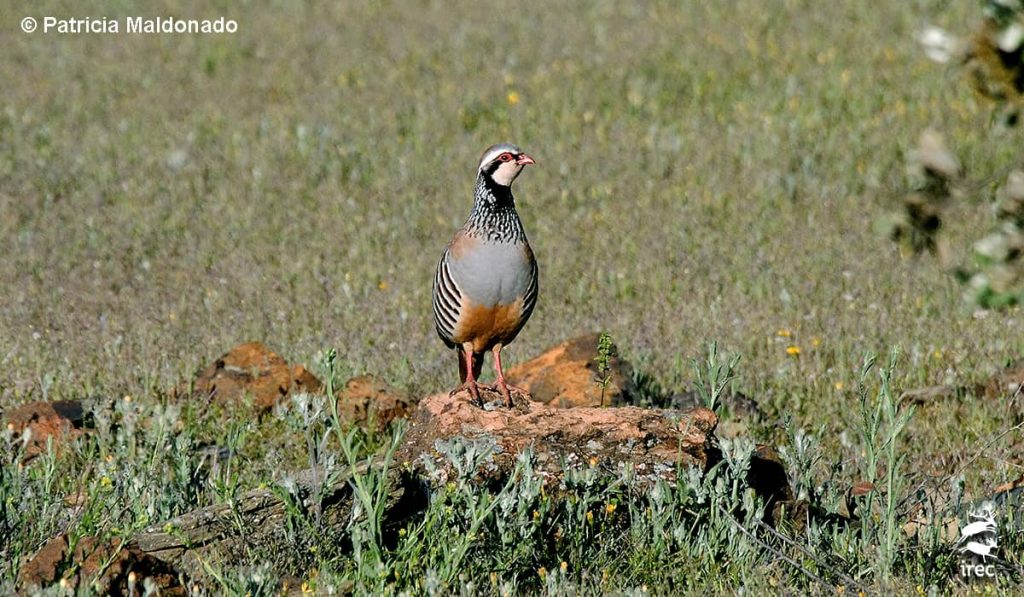 The red-legged partridge (Alectoris rufa) is an excellent biological model to study the impact of global warming on ecosystems and biodiversity, as it is a medium-sized sedentary bird that is a key prey for a multitude of predators and that in turn feeds on a great variety of living organisms (Photo: Patricia Maldonado).

The method developed, which derives from the long-term study (14 years) of a wild red-legged partridge population in Spain and the collection of data of almost 14,000 partridges, begins with the organization of the environmental and intrinsic factors that might influence the timing of moult end into a network, classifying these factors according to their contribution to quantitative moult models and, finally, as a function of their interactions and effects on the end of primary moult over the annual cycle.

Results of its application show no timing differences by age, but rather significant timing differences by adult sex, so that more females overlap their moult with juveniles than males, because female parental effort is higher. The timing of the end of moult varies by year due to conspecific interactions that change according to influences of the weather, habitat and social conditions.

Thus, adult parent birds synchronize their primary moult with the chick’s growth and according to the degree of cover and the availability of food resources in the habitat. These findings highlight the importance of the end of the moulting period for understanding population demographics and their implications for ecosystems. 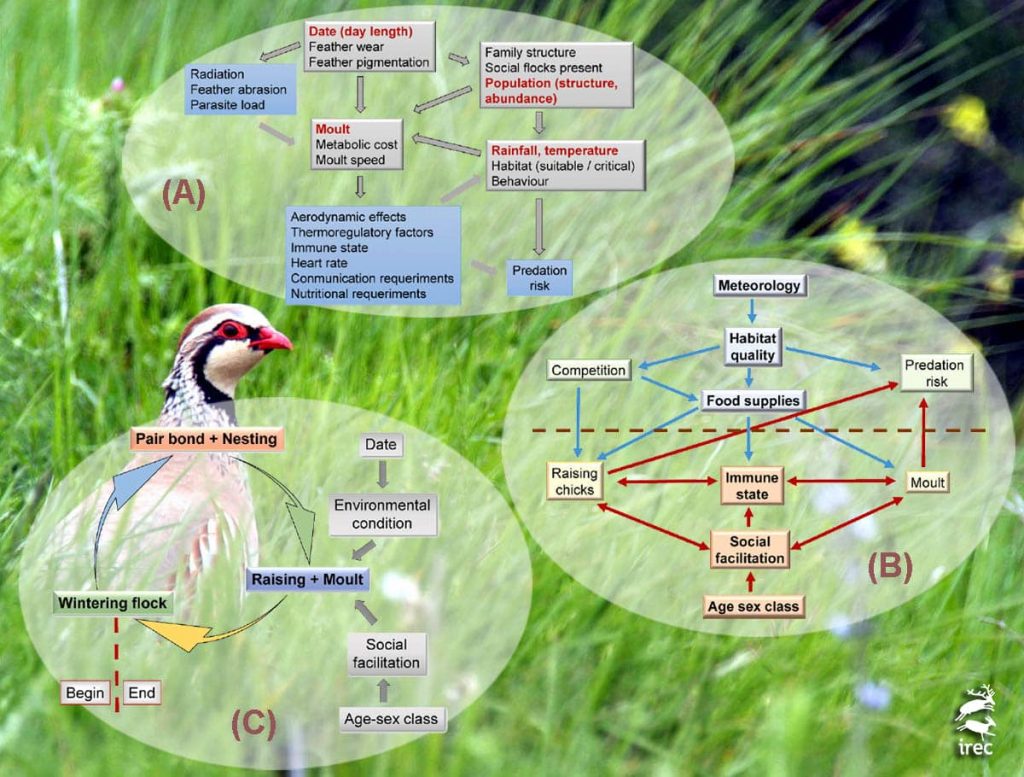 (A) Diagram of the nomological network showing the interrelationships between the causes, explanatory variables and consequences of factors on the timing of the end of primary moult; (B) The proposed conceptual model explaining how environmental and intrinsic factors could affect the timing of the end of moult; (C) Conceptual model explaining the bird’s moult process.

On the other hand, the results of this work suggest that birds’ moult advances with global warming, probably because warming advances seasonality, which drives the timing of the biological cycle. Somehow, global warming "exert pressure" on birds to moult earlier, and this can cause a decrease in the annual growth of the population, in this case of the red-legged partridge. For example, the breeding season of the red-legged partridge is long and allows the growth of brood chicks from early and late clutches, but with global warming, only brood chicks from early clutches are likely to survive.

This research work provides clear and accurate information on how to study the impact of global warming on the end of birds’ moult, following a methodological approach that links several stages of analysis and synthesis of information related to the species, the population and the environment; and gathering prior knowledge about the effects of global warming on birds’ moult.