Crimean-Congo haemorrhagic fever virus is detected in ticks from wild ungulates from different provinces in southwestern Spain. Its wide distribution and high genetic variability could lead to the appearance of new strains of the virus in the future, with the consequent epidemiological risk.

Crimean-Congo haemorrhagic fever virus (CCHFV) is a tick-borne pathogen belonging to the family Nairoviridae, genus Orthonairovirus. It comprises seven serogroups including a total of 34 tick-borne viruses, which are associated with serious diseases that affect both humans and domestic and wild animals. Specifically, CCHFV is known to cause severe outbreaks of viral haemorrhagic fever, with a fatality rate that can be as high as 40%.

CCHFV, which was detected for the first time in Crimea in 1944, has increased its incidence and geographical distribution since the beginning of the 21st century, when cases began to be reported in Turkey, Iran, India and some Balkan countries. Thus, it is currently considered an emerging disease in some European countries.

The first case of CCHFV in humans detected in Spain occurred in September 2016 as a result of exposure to ticks. The transmission of the virus is produced by the bite of a tick that has fed on the blood of an infected host, acting as a vector and reservoir of the virus. To date, a total of five confirmed human cases have been reported in Spain, the last of them in early June this year. 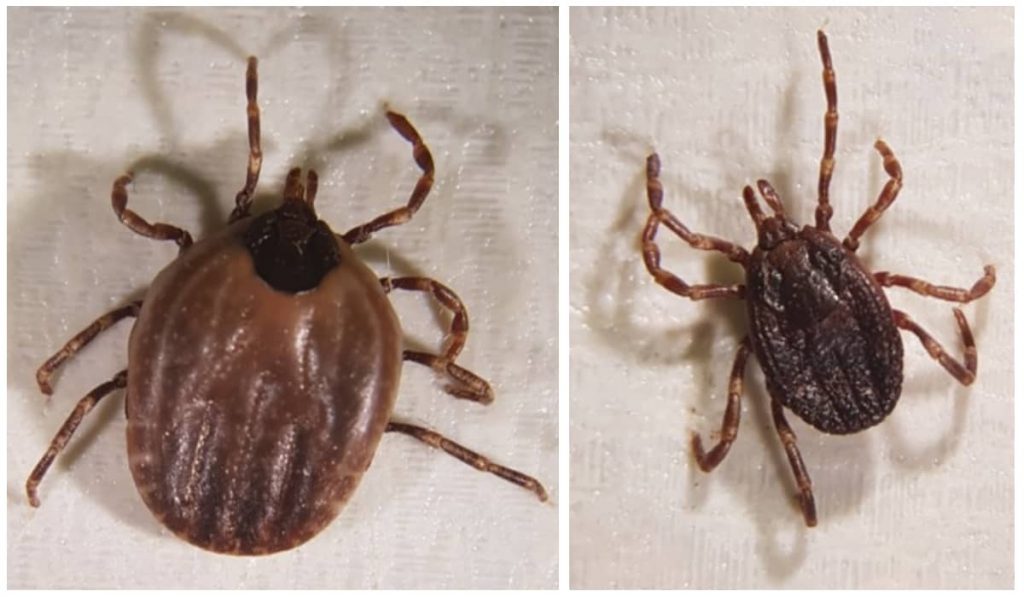 The main genus of ticks implicated in the transmission of CCHFV is Hyalomma spp. In the image we can see two females of Hyalomma lusitanicum, one engorged or fed (left) and the other not fed (right).

The genetic material of the virus –its RNA– was identified for the first time in Spain in 2010, coming from a tick of the species Hyalomma lusitanicum that fed on the blood of a red deer (Cervus elaphus). Of the 6 different genotypes of the virus that are known, the virus was classified as CCHFV genotype III, which comes from Africa, suggesting that the virus present in Spain was introduced from the African continent to Europe through migratory birds.

However, the presence and phylogenetic classification of the virus at a wide scale in ticks that parasitize the main species of wild ungulates in our country has been scarcely studied. Addressing this knowledge gap on CCHFV was increasingly necessary, given the emergence of this serious zoonosis, the progressive increase in the population size of various species of wild ungulates in Spain over the last decades and the important role played by these animals in maintaining high densities of virus-transmitting ticks.

This was the objective of a group of scientists led by the Research Group in Health and Biotechnology (SaBio) of the Instituto de Investigación en Recursos Cinegéticos (IREC – CSIC, UCLM, JCCM) in collaboration with researchers from the Universidad de Extremadura and the Universidad Complutense de Madrid, who have analyzed more than 600 ticks of two different species (Hyalomma lusitanicum and Dermacentor marginatus) that parasitized wild animals, including the red deer, the roe deer (Capreolus capreolus), the fallow deer (Dama dama) and the wild boar (Sus scrofa), in southwestern Spain, where it is common to find high densities of ungulates with large parasitic loads. Furthermore, a high antibody prevalence against the virus in wild animals and the human cases recorded in Spain are linked to this area. 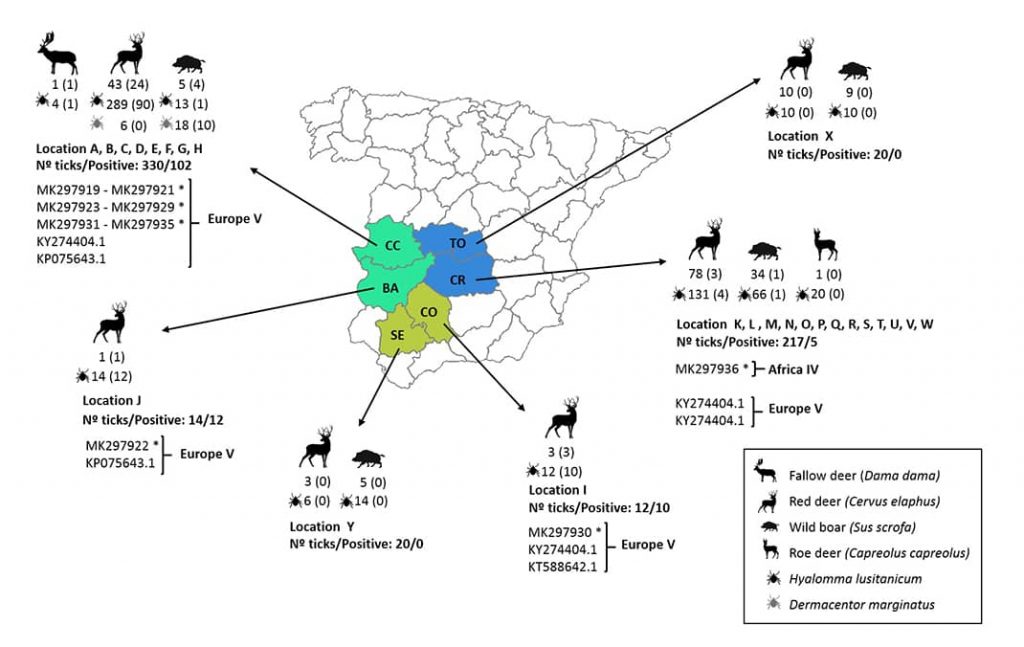 The sampling points at which ticks were collected included 25 different locations belonging to 6 provinces. The study was based on the RT-PCR amplification of an RNA fragment from the S segment of the virus, which was subsequently sequenced and phylogenetically analyzed for its genotypic classification according to the amplified fragment.

Results show the presence of CCHFV in 21% of the ticks analyzed, which is a much higher value than that detected in previous studies. They also reveal that, unlike the previous studies carried out against this pathogen, according to the amplified sequence of the virus, the genotype identified is not the one previously described in Spain (genotype III), but genotypes V and IV, the first from the Eastern Europe and the second from Central Africa. Furthermore, the scientists found a high genetic variability in the viruses detected, identifying 24 different gene sequences, of which 18 were new sequences that did not correspond to any previously described genetic sequence for CCHFV.

This work reveals the wide spatial distribution and high genetic variability of the Crimean-Congo haemorrhagic fever virus in southwestern Spain, which could lead to the appearance of new strains of the virus in the future, with the consequent need for increased epidemiological surveillance. The high percentage of ticks in which the virus was detected in some of the study areas indicates the need to monitor these populations and extend the study to other areas.

On the other hand, it should be noted that although documented human clinical cases and the percentage of the population with antibodies to the virus is relatively low in Spain, it is important to bear in mind that the scenario may vary in the future due to the high genetic variability of the virus together with other factors, such as the increasing trend of high tick loads associated with high densities of wild hosts and changes in the rate of exposure of humans to tick bites.