The Mediterranean spur-thighed tortoise (Testudo graeca) is widely distributed in North Africa, but is also located in southern Spain (Almería-Murcia, Huelva and Balerares). Unfortunately, this tortoise is listed as Vulnerable internationally, thus it is necessary to know which are the factors that threaten this species, in order to establish appropriate conservation strategies. 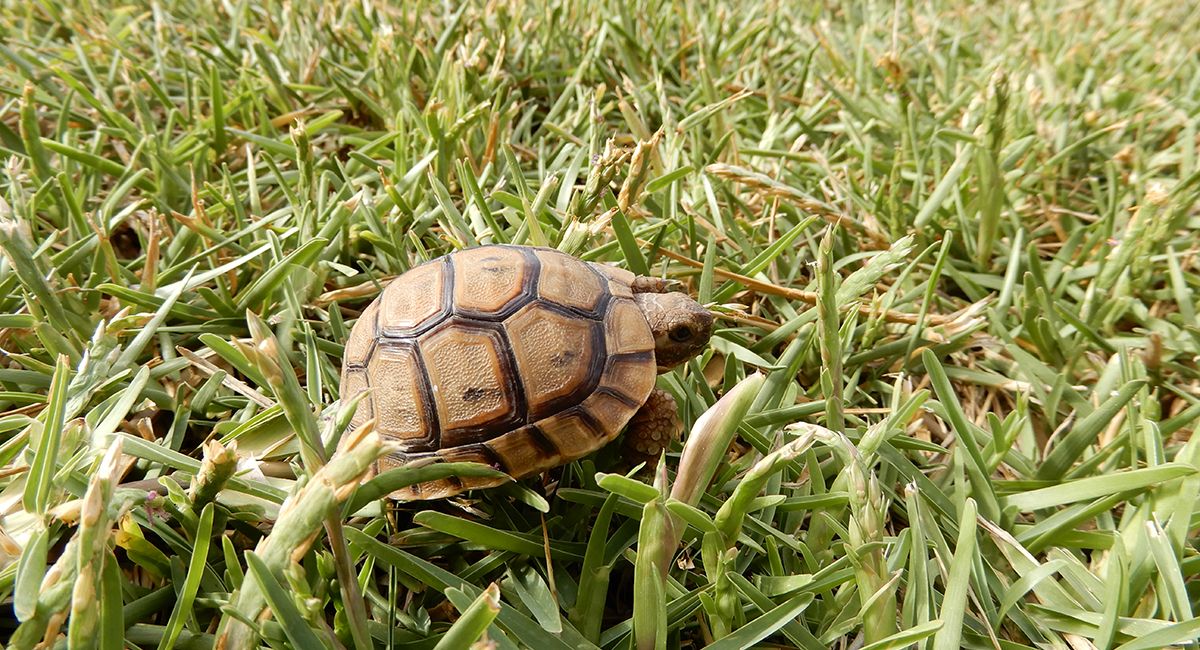 Overall, tortoise populations are characterized by a high adult survival and low recruitment rates, since hatchlings and juveniles are especially vulnerable to adverse weather conditions, low food availability and predation.

Concretely in the case of the Mediterranean spur-thighed tortoise, associated to semi-arid natural habitats, the few available studies have estimated high mortality rates (95%) in non-reproductive individuals. However, our knowledge of this species at its early life stages is very low due to its low detectability.

The shells of young tortoises are soft or not sufficiently solid to protect them from predators; if so, predation might play an important part in the early mortality, especially in anthropic environments, which favour the abundance of certain opportunistic predators. At this respect, habitat structure could determine the risk of predation, since a high vegetation cover might favour the camouflage of the young tortoises and reduce their detectability by predators.

These were the hypotheses of a group of scientists from the Instituto de Investigación en Recursos Cinegéticos (IREC – CSIC, UCLM, JCCM), which has studied four populations of Mediterranean spur-thighed tortoise in the Maamora Forest, in northern Morocco.

This area is specially adequate because, has been documented till date as one of the densest populations of Mediterranean spur-thighed tortoisesand has a growing population of opportunistic common raven (Corvus corax), which is favoured by the anthropization. 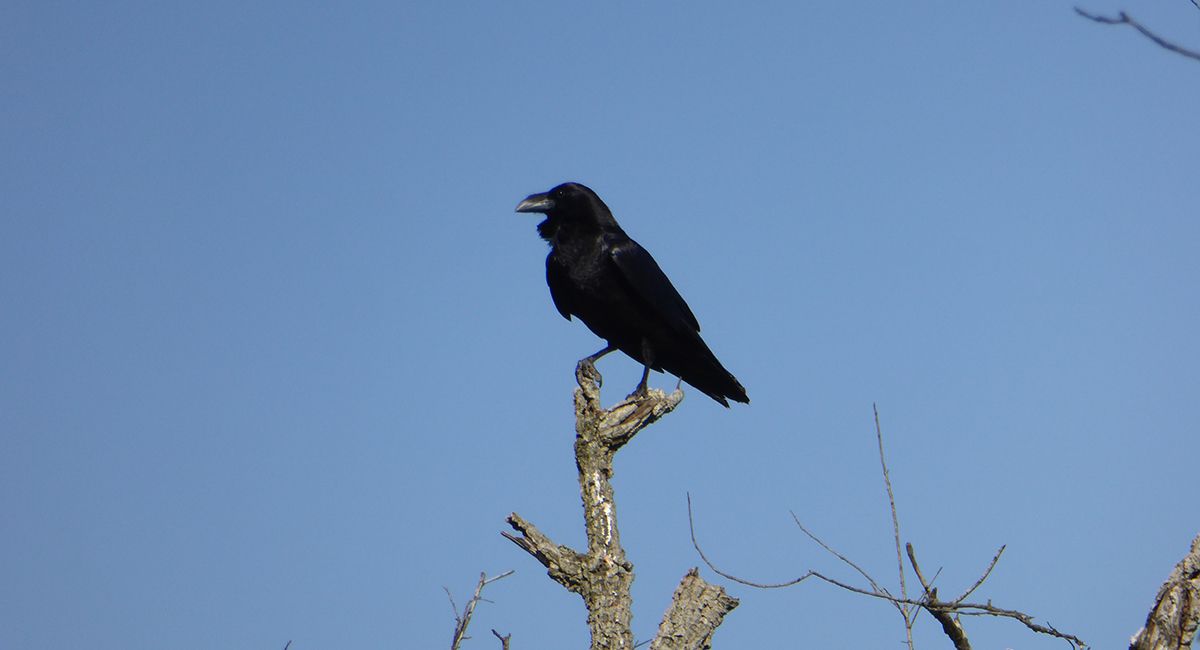 Anthropogenic disturbance in the Maamora Forest had increase the presence and abundance of the common raven (Corvus corax) in the last decades (Photo: Amalia Segura).

The study reveals that, indeed, ravens exert an important predation on the young specimens of Mediterranean spur-thighed tortoise, especially on those whose shell measures between 40 and 70 mm. However, such predation depends largely on the vegetation cover provided by shrubs.

Thus, in areas with low shrub cover, the predation of ravens on young tortoises was strong enough to influence their population structure. Surprisingly this fact is not observed in the Spanish populations of Mediterranean spur-thighed tortoise. 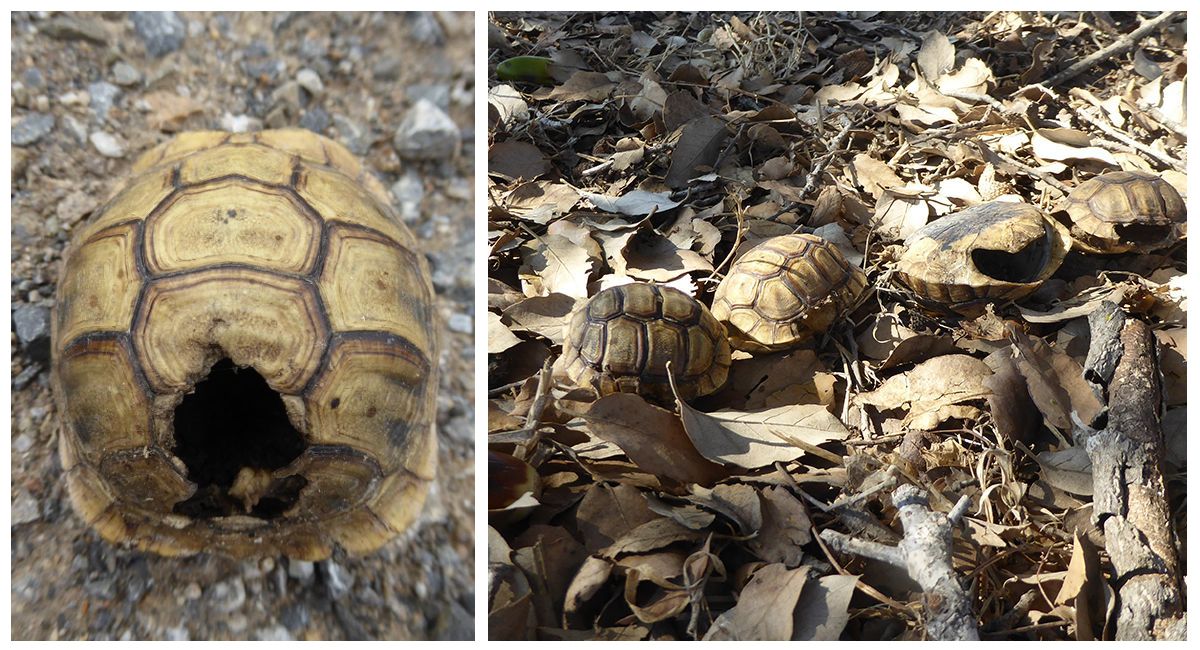 Ravens drill the shells of young tortoises with their beaks and extract their bodies to feed on them (Photo: Amalia Segura).

Nevertheless, in areas with abundant shrub cover, raven predation over tortoise populations was anecdotaldue to the lower ability of ravens to detect them.

This scientific work improves the knowledge and highlights the role that exerts predation of hatchlings and juveniles of Mediterranean spur-thighed tortoise. In addition, it alerts of the effects of the current increase of raven populations associated to anthropization if we want to conserve this species. In fact, raven predation is one of the most important causes (Gopherus agassizii), other terrestrial tortoise.