The study of the spatial movements of GPS-tracked griffon vultures, their exposure to lead and the isotopic signature of this heavy metal in blood, soil and ammunition from big game hunting reveal the origin of lead poisoning as a threat to the conservation of avian scavengers.

The toxicity of lead (Pb) and its incidence on humans has been well known for a long time. Already in antiquity, the "father" of medicine, Hippocrates, described the toxic effects of Pb when he observed the ailments suffered by miners who extracted this metal. Francisco de Goya and other famous painters such as Sorolla, Caravaggio or Van Gogh are believed to have been victims of Pb poisoning or plumbism, having been intoxicated due to the daily manipulation of their paintings, in which Pb was used as an additive. Therefore, if Pb is a highly toxic metal for humans, it is not unreasonable to assume that it is also harmful to wildlife.

Although all vertebrates are sensitive to Pb, birds are especially so, and one group in particular stands out above all: vultures. Its main source of poisoning is considered to be the use of ammunition from big game hunting. A Pb bullet, when hitting an animal, can break into up to 500 pieces, and although hunters often take the meat, the viscera usually stay in the field. On other occasions, the animal wounded by the impact of a bullet cannot be located, thus it ends up dying in the field, leaving its carrion at the mercy of vultures. 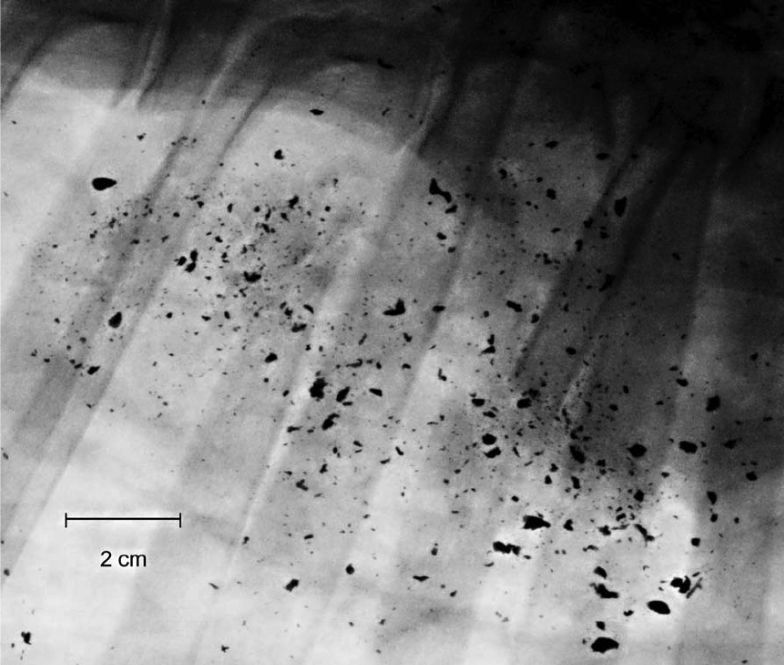 This is what the mid-thorax of an adult deer that has been hit by a Pb bullet looks like. Black shards are the small Pb fragments surrounding the bullet path into which the bullet disintegrates upon impact.

To get an idea of the magnitude of the problem, it is worth remember the case of the California condor (Gymnogyps californianus), which almost disappeared due to plumbism. It is clear that exposure of vultures to Pb residues derived from hunting ammunition can pose a serious problem for their conservation, but, is Pb ammunition the only source of poisoning from this heavy metal for vultures?

Some time ago, it was suggested that vultures could bioaccumulate Pb by feeding on the carrion of wild and domestic ungulates exposed to high environmental concentrations of this metal, especially in areas affected by former mining activities, where soils, plants and water sources still contain high levels of contamination by metals. It seems that the issue is not entirely clear, and given that the Iberian Peninsula hosts between 70 and 90% of European vultures, a group of scientists has considered necessary to determine the role of both potential sources of Pb exposure (soil and ammunition) in the cases of poisoning that are registered in vultures.

To this end, researchers from various scientific institutions tagged with GPS devices and collected blood samples from a total of 58 griffon vultures (Gyps fulvus) from two areas of the Iberian Peninsula (the Ebro Valley and the Sierra de Cazorla), which were well differentiated in terms of topsoil Pb concentration and intensity of big game hunting activity.

First, results showed that most of the individuals had high blood Pb levels.However, those foraging in areas with higher big game hunting activity (Sierra Morena and surroundings) had the highest blood Pb levels, even when they came from areas as far away as the Ebro Valley. Although it was not as decisive as game hunting activity, the amount of Pb present in the topsoils of foraging areas also influenced the risk models. 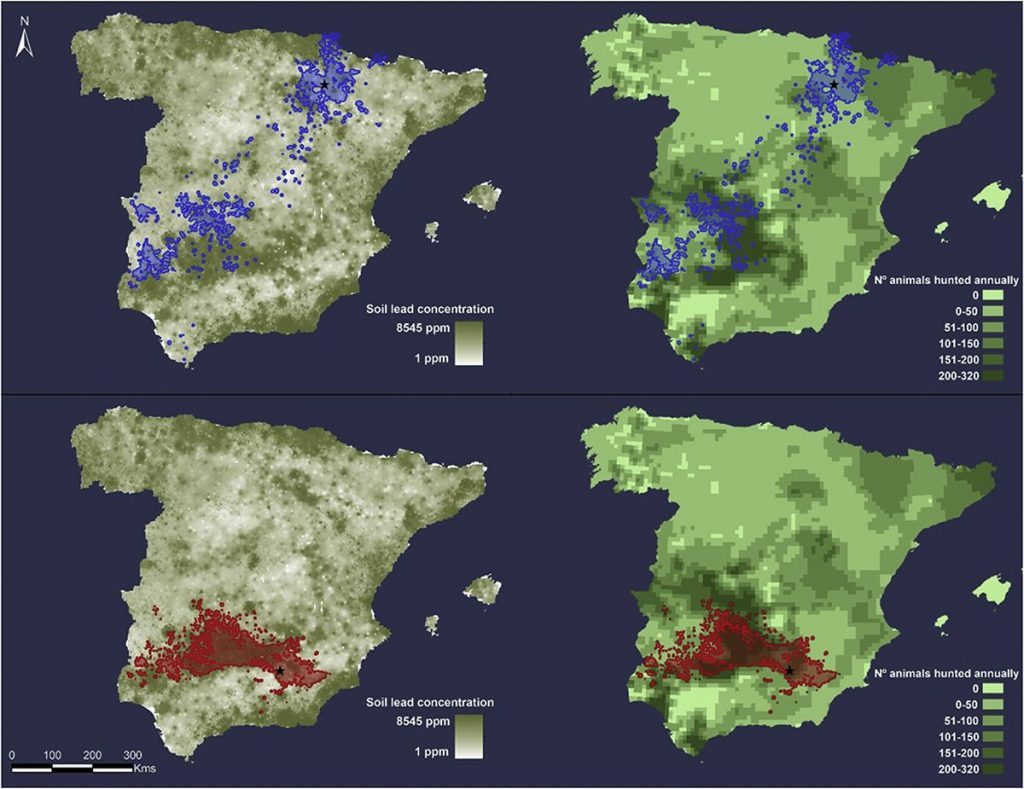 These maps show the foraging movements of the GPS-tracked vultures from the two studied populations in blue and red contour, respectively. Different shades of green in left maps represent the Pb concentration in the superficial topsoil, whereas in right maps represent the intensity of big game hunting.

The next step was to estimate the potential contribution of each isotopically distinct potential origin of Pb (topsoil and ammunition sources) in the diet of griffon vultures. Stable isotopes are like the "fingerprint" of chemical elements, thus its study is very useful to determine the potential origin of the Pb present in the blood of vultures. Unexpectedly, the Pb signature found in vultures was closer to that found in topsoil than to that present in game hunting ammunition, although this similarity decreased significantly in the area with higher big game hunting activity.

Everything seems to indicate that are constantly exposed to basal amounts of Pb from topsoils, and exceptionally to extraordinarily high amounts of Pb from big game hunting ammunition. Based on these results, the authors of this work emphasize that the hunting sector must become aware of and abandon Pb ammunition completely, replacing it with other alternatives that already exist on the market. On the other hand, this research work warns of the need to continue studying the role of Pb present in contaminated soils in the poisoning of certain raptor species more sensitive than the griffon vulture, such as the Spanish imperial eagle or the Egyptian vulture.

More about this topic is available through this interesting thread on Twitter published by the main author of the research paper. Furthermore, the scientific publication of this research is available at: