A study demonstrates the predictive capacity of spatial models of wild boar relative abundance, generated in 2014 from data from hunting yields, comparing them with current hunting yields of the species.

The wild boar (Sus scrofa) is a wild ungulate widely distributed and involved in numerous conflicts with humans, the conservation of other wildlife species and public health. In order to make decisions regarding its management, reliable estimates of its abundance are necessary, and in this sense spatial modelling has become the most widely used option to determine how abundance is distributed on a large scale. Hunting yields have been a widely used data source for this, but very few studies have evaluated the real predictive capacity of models based on these data a posteriori on new time series and/or territories.

Scientists from the Research Group in Health and Biotechnology (SaBio) of the Instituto de Investigación en Recursos Cinegéticos (IREC – CSIC, UCLM, JCCM) have tested the predictive capacity of wild boar abundance of explicit spatial models generated previously (2014) for the different bioregions of Spain (according to the Wild Fauna Disease Monitoring Surveillance Scheme) based on data from hunting yields, as well as its transferability to territories for which data were not available. To do this, they have projected the models created in 2014 on a total of 13,807 hunting grounds and have compared the abundances predicted by the models with the hunting yields obtained during the 2014-2018 seasons. 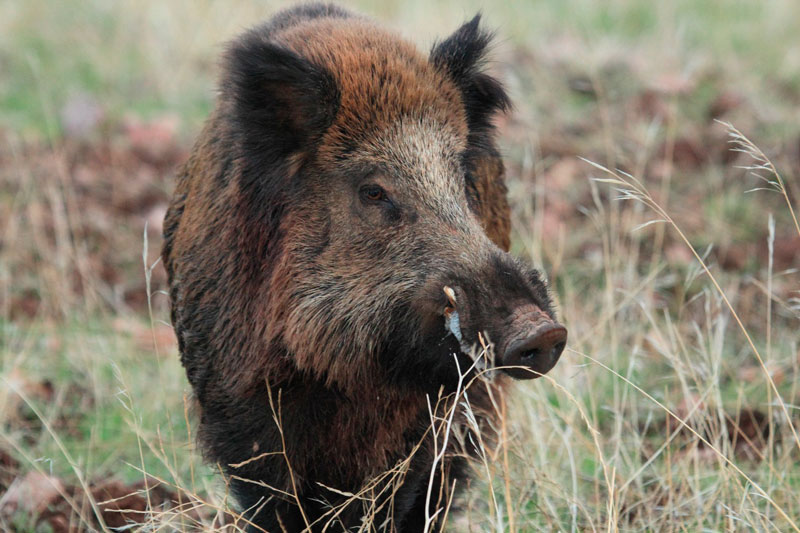 Knowing the distribution, abundance and population density of the wild boar and predicting its evolution over time is key to managing the species and minimizing the conflicts associated with its overabundance.

The predictive models generated in 2014 were parameterized based on wild boar hunted annually per 100 km2 as response variable and a set of 21 bioclimatic variables used as predictors. The data available for the creation of the models covered approximately 60% of the surface of peninsular Spain and were subsequently extrapolated to predict the abundance of wild boar also in non-sampled territories.

In this study, previous models were used to predict wild boar abundance at the hunting ground level, generating predictions both for areas where the models were calibrated (interpolation areas) and for areas where there was no data in the 2014 models (extrapolation areas). From recent data on wild boar hunted at the hunting ground level, the observed relative abundance was calculated (wild boar hunted/100 km2), which was used to evaluate the predictive performance of the previous models.

For the comparison between the relative abundances recently observed and those predicted by the models, visual inspections of the cartography produced were carried out, calibration graphs were obtained and Pearson correlations were calculated. 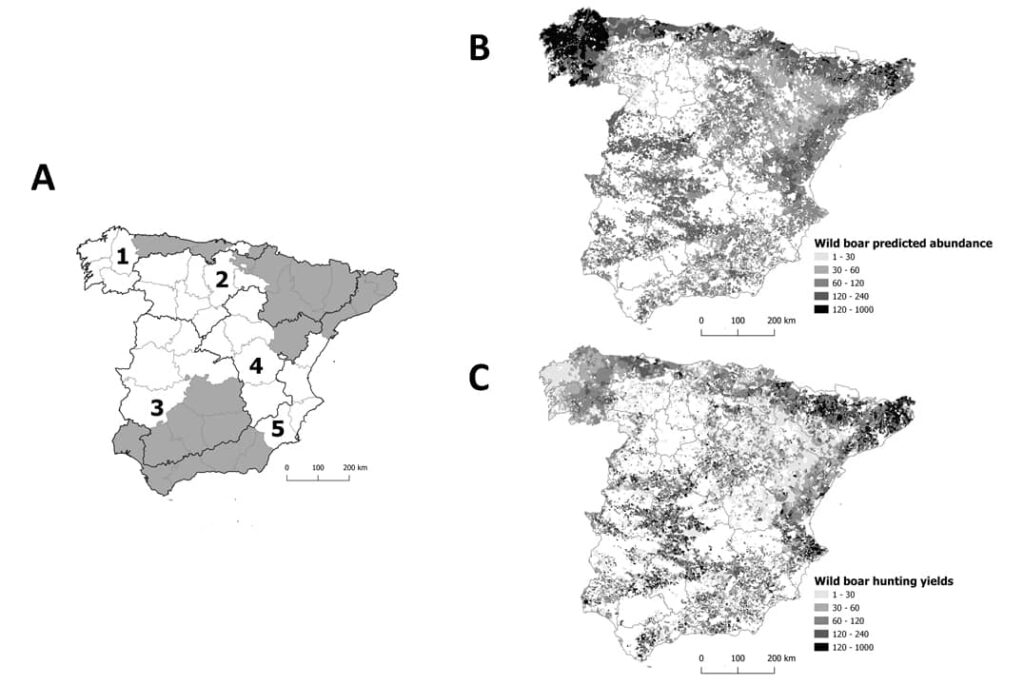 (A) Peninsular Spain divided into the 5 bioregions defined by the Wildlife Disease Monitoring Surveillance Scheme. The provinces used for the calibration of the models generated in 2014 are highlighted in grey. (B) Predicted relative abundance of wild boar (no. of wild boar hunted annually/100 km2) at game preserve level based on 2014 models. (C) Updated wild boar hunting yield data (2014-2015 to 2017-2018 seasons) ) used to assess the predictive performance of the 2014 models.

The results show that spatial models generated in 2014 were able to predict current general patterns of wild boar relative abundance, showing growth rates equivalent to those reported by other authors, although their performance varied between bioregions. The predictions in interpolation areas were better than those obtained for the extrapolation areas, and the accuracy of the predictions decreased as the spatial resolution of the predictions increased (hunting ground).

This suggests that spatial models generated from hunting yields can predict general patterns in the distribution of wild boar relative abundance, which represents a significant advance in the use of this quantitative information to predict the spatial patterns of relative abundance of game species at a large-scale. However, they need a critical evaluation and their application must be done with caution, since models can lose precision when trying to extrapolate to other areas for which there is no information or when trying to obtain predictions at a fine spatial scale, due to that differences in hunting efforts and yields can alter the results.

It is necessary to continue improving the predictions obtained through this type of models in order to apply them in the development of wildlife management plans. From the epidemiological point of view, in the specific case of the wild boar, a clear example of its applicability can be found in the prevention strategies of African Swine Fever (PPA), since knowledge of the spatial pattern of wild boar abundance would be essential to predict the spread of the disease and to establish effective control measures.