Up to 95% of participants in an online survey agree that there is a need to control the damage caused by the overabundance of certain wildlife, such as wild ungulates, in national parks. However, there is no consensus on the most appropriate methods to carry out this control.

The uncontrolled growth of some animal populations, such as the red deer (Cervus elaphus) and the wild boar (Sus scrofa), can have negative environmental and socioeconomic repercussions. In many habitats, especially in those whose evolution has been associated with traditional human activities (such as extensive agriculture, grazing livestock, or hunting), the active management of these populations may be necessary, since no intervention could lead to a cascade of ecological effects less favorable for the conservation of the whole ecosystem. In the case of national parks, this issue has generated a particularly intense debate between the positions in favor and against human intervention in the control or management of certain natural processes.

According to a study recently developed by the Instituto Universitario de Investigación en Gestión Forestal Sostenible (iuFOR) –a joint center of the Universidad de Valladolid and the Instituto Nacional de Investigación y Tecnología Agraria y Alimentaria (INIA)–, the Instituto de Estudios Sociales Avanzados (IESA -CSIC), the Instituto de Investigación en Recursos Cinegéticos (IREC – CSIC, UCLM, JCCM) and the Universidad Complutense de Madrid, up to 95% of people would agree that there is a need to control the damage caused by the overabundance of wild ungulates in protected areas, such as agroforestry national parks. However, it seems that there is no consensus about the most appropriate method to carry out this control.

The uncontrolled growth of some animal populations, such as the red deer and the wild boar, can have negative environmental and socioeconomic repercussions.

This work considered as case studies the national parks of Monfragüe (Extremadura) and Cabañeros (Castilla-La Mancha), since both present a worrying problem of overpopulation of wild ungulates that could contribute to their environmental degradation. “These protected areas have in common a landscape generated by traditional human activities, so that humans have been part of the balance of their ecosystems”, explains María Martínez Jáuregui, researcher at iuFOR. For this reason, this research wonder whether, taking into account that these are natural area created or modified by human activities, the population sizes of some animals that may contribute to their degradation, such as wild ungulates, should or should not be controlled.

“Unlike the large North American or African parks, European national parks are relatively small, so they are influenced by what happens outside them. In this way, no intervention could lead to the deterioration and loss of the natural and ecological values for which they were declared as national parks”, the researchers clarify.

Information was collected through an online survey including a choice experiment, so that the respondents (a total of 190 Spanish people) could express their preferences on the measures of population control related to the intensity of the negative effects of the overabundance of wild ungulates in these national parks. These negative impacts included effects on vegetation, on other wildlife species and the transmission of diseases to livestock.

Should we intervene or not? That is the question.

Results of this research, published in the scientific journal Conservation Biology, highlight the social concern over the deterioration of the Monfragüe and Cabañeros national parks, in which the excess of wild ungulates could lead to the disappearance of other species of fauna and flora. Thus, while 95% of respondents affirmed that they agree with the need to intervene to reduce or mitigate the damages derived from the overabundance of wild ungulates, only 2% affirmed that they no human intervention even if lack of management may entail a greater risk of environmental degradation. These results therefore show the existence of a general positive perception regarding the implementation of programs to manage the overabundance of wild ungulates in national parks.

Let’s intervene… But, how and when?

The greatest discrepancy among those who were in favor of the intervention arose when determining the most suitable tools to alleviate or eliminate the damage derived from the overabundance of wild ungulates.

In this case, it was observed that, in general, social well-being is more influenced by the tools to control population growth than by the environmental impacts of overabundance. Thus, the majority of respondents showed their preference for indirect interventions to avoid damage, or for an indirect intervention on ungulate populations (such as live trapping of deer for subsequent transportation to slaughterhouses or private hunting grounds). In contrast, hunting (direct culling) as a management tool to control the overabundance of wild ungulates in national parks was the least preferred alternative by respondents.

In any case, a considerable percentage of respondents did not reject the use of lethal methods to control overabundance when the environmental and socioeconomic impacts are severe. Thus, lethal and more invasive management options become more acceptable if the damage caused is unsustainable. Furthermore, the degree of acceptance of the intervention depended on the type of damage (intervention was considered more acceptable if the damage was severe and if the damage was on livestock rather than on vegetation). 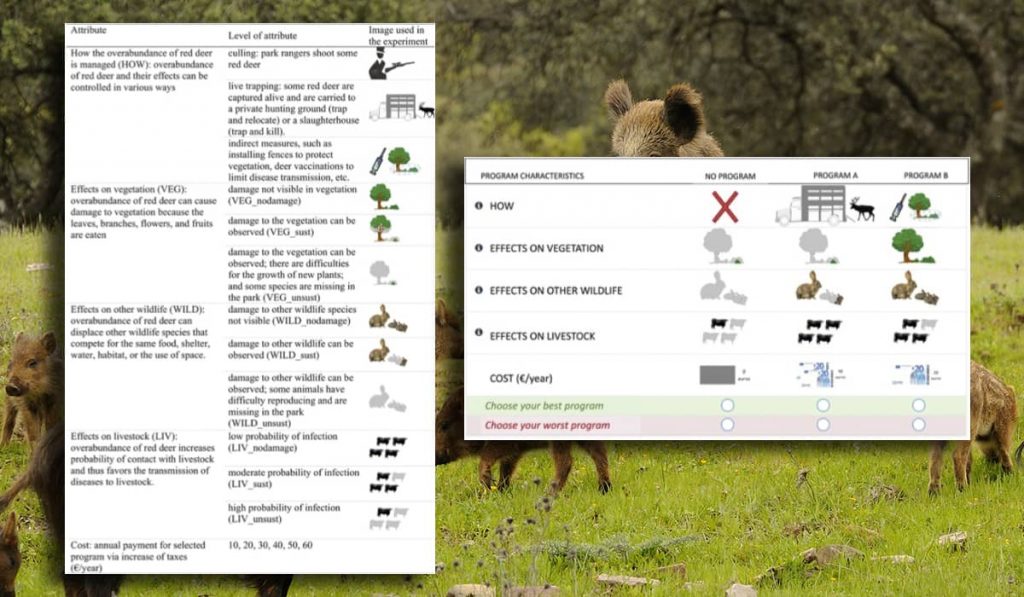 On the left, some attributes and levels of damage and interventions to mitigate damage from overabundance of red deer defined in the survey. On the right, it is shown an example of card used in the choice experiment.

So, in favor or against hunting?

A question in the survey proposed the control of overabundance to be carried out by hunters supervised by environmental agents as an option to finance these interventions. In this case, 66% of respondents were in favor of this alternative. In this case, hunters, when carrying out a recreational activity, would pay to practice the hunting activity, so the cost (via taxes) of controlling the overabundance of ungulates would be reduced.

However, up to 19% of respondents rejected this option clearly, despite its economic implications. Therefore, although much of society would be in favor of controlled and supervised recreational hunting as a tool to control the overabundance of wild ungulates, there is undoubtedly a social conflict.

As a whole, the results of this work show that society is committed to population control in national parks when overabundance of wild ungulates involves severe damage to the environment. However, there are discrepancies regarding the control methods, so that this work has not allowed identifying an obvious and socially acceptable solution regarding the ideal tools to carry out the control tasks.