Despite having decreased by 36% over the last two decades, the levels of organochlorine compounds in common kestrel eggs from the Canary Islands indicate that their exposure to these contaminating chemicals remains important.

Organochlorine compounds are among the most problematic organic pollutants owing to their lipophilicity, that is, their affinity for the lipids of cells, and their high persistence, since this gives them a great capacity to bioaccumulate in living organisms and to biomagnify through the food chains. In addition, they are compounds widely distributed in ecosystems due to their intensive use as pesticides in the past and their their long-range atmospheric transportation.

As a consequence of its harmful and widespread impact on living organisms, organochlorine compounds began to be banned from the 70s of the 20th century. Despite this, and because of their high persistence in the environment actually, it is necessary to continue monitoring their presence and effects on living organisms in different geographical areas in order to assess whether the measures adopted to eliminate them from ecosystems are working properly.

Scientists from the Research Group in Wildlife Toxicology of the Instituto de Investigación en Recursos Cinegéticos (IREC – CSIC, UCLM, JCCM), the University of Koblenz-Landau (Germany) and the Universidad de La Laguna, have used the common kestrel (Falco tinnunculus) as a study model to assess the presence of organochlorine compounds in birds from southern Tenerife (Canary Islands, Spain) between 2009 and 2016, in order to compare its temporal trend with respect to previous data obtained between 1988 and 1994. Using unhatched eggs of this raptor as the biological matrix under study, they have also identified the spatial factors that determine their exposure to these chemicals and the effect they have on their reproductive health. 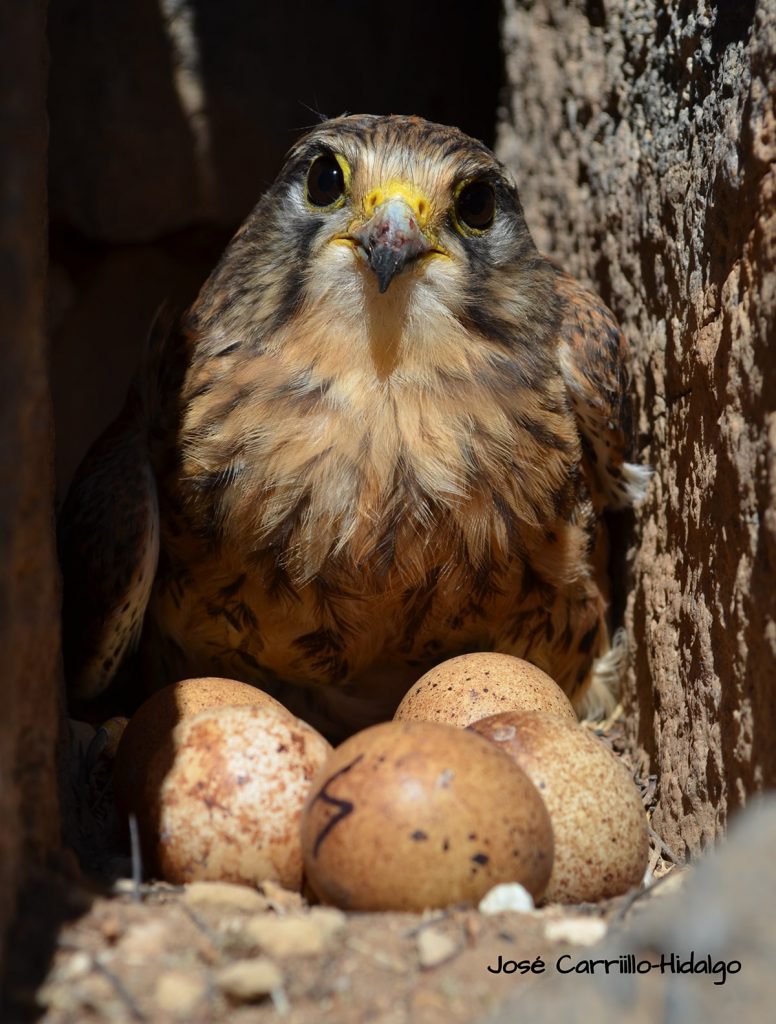 The common kestrel (Falco tinnunculus) is the most common bird of prey on the island of Tenerife. It is a sedentary species that breeds in a wide range of habitats, including semiarid environments, where it preys principally on insects, lizards and mice (Photo: José Carrillo-Hidalgo).

The Canary Islands are one of the geographical areas of Spain in which the agricultural use of organochlorine pesticides was more intense in the past, in addition to their use as a method against plagues of African locusts. In fact, it is very likely that the release of these compounds into the environment contributed to the extinction of the red kite and to the decline of the Egyptian vulture in the Canary archipelago.

Results show that levels of organochlorine compounds in common kestrel eggs have decreased by 36% in southern Tenerife over the last two decades. The most abundant compound was dichlorodiphenyldichlorethylene (DDE), which is the result of the metabolism of dichlorodiphenyltrichloroethane (DDT) –an organochlorine pesticide sadly famous because of its adverse effect on bird reproduction– followed by polychlorinated biphenyls (PCBs).

The levels of DDE, which were still relatively high when compared to those detected in eggs of raptors from continental Spain between the 70s and 90s of the last century, were positively related to the crop surface area around nests or with its proximity to urban areas, indicating its high persistence in areas where DDT has been applied intensively in the past. In the case of PCBs, their levels in common kestrel eggs were associated with proximity to roads, whose density reflect the degree of urbanization and therefore the existence of multiple potential sources of PCBs. 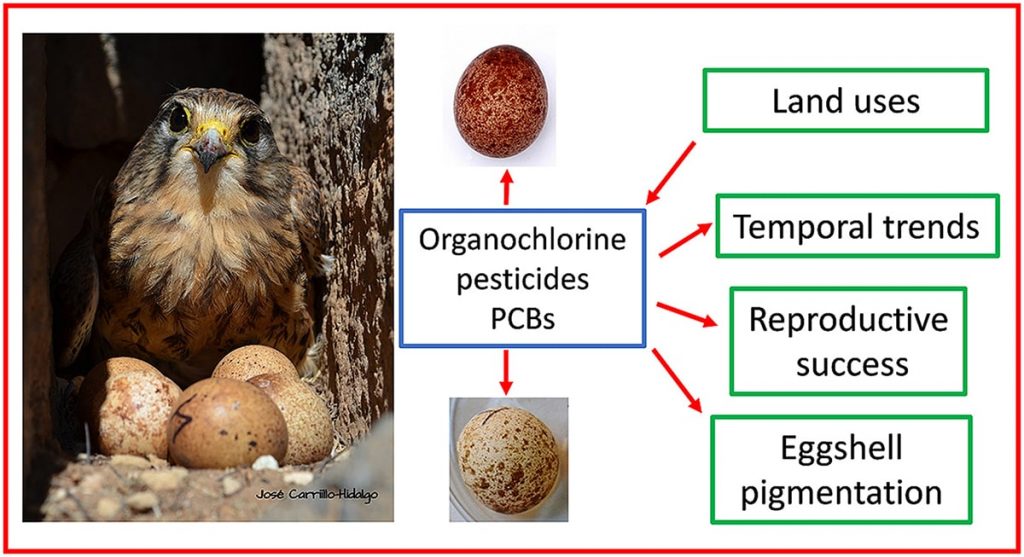 Birds of prey are good "sentinel species" of environmental contamination owing to their position in the food web. The monitoring of organochlorine compounds in birds is usually performed with eggs, since the lipophilicity of these substances facilitates their accumulation in the egg yolk, which is very rich in lipids. Furthermore, unhatched eggs are non-invasive samples that provide a wealth of information on the reproductive health of birds without disturbing the species under study.

On the other hand, DDE levels in eggs were negatively related to eggshell thickness, one of the characteristic effects of this organochlorine compound on the reproductive system of birds that causes the eggs to be more fragile and easier to break during incubation. Furthermore, the researchers detected a negative relationship between levels of exposure to hexachlorobenzene and the concentration of protoporphyrin IX in eggs, a pigment responsible for eggshell coloration.

This study highlights that common kestrels from southern Tenerife are still exposed to organochlorine compounds at levels high enough to affect the properties of the eggshell, although it has not been possible to verify a significant effect on their reproductive success. The presence of DDE in the environment of Tenerife must continue to be evaluated to identify sources of contamination capable of affecting the conservation of endemic species.