Conditioned food aversion could be used as a non-lethal tool to reduce livestock predation by wolves, contributing to the necessary coexistence between humans, livestock raising and the wolf.

Predation is a kind of ecological interaction in which an animal –the predator– captures another animal of a different species –the prey– to feed on it. This biological relationship, which inexorably determines the death of one of the parties involved (the prey), is also one of the causes of the historical conflict between humans and large carnivores worldwide.

In geographic areas where a large carnivore coexists with livestock reared in extensive systems, the carnivore can see an “easy prey” in livestock to feed on, causing damage to the livestock sector. The perception of the carnivore as a threat triggers its persecution, which can generate serious conservation problems, not only for the carnivore species involved, but also for the entire ecosystem of which it is a part and its trophic web.

In much of the western world, also in Spain, the non-human protagonist of this conflict is represented by the wolf (Canis lupus). Until a few decades ago, the goal of farmers and part of the rural society was to exterminate wolves. Such was the intensity of its persecution in Spain, where the species almost disappeared, that the master Félix Rodríguez de la Fuente gave it the nickname of "the great outlaw." Fortunately, thanks to Felix’s own work, this destructive current has been changing little by little and, at present, solving this conflict involves reaching a balance that allows the necessary coexistence between humans, livestock rearing and the wolf. 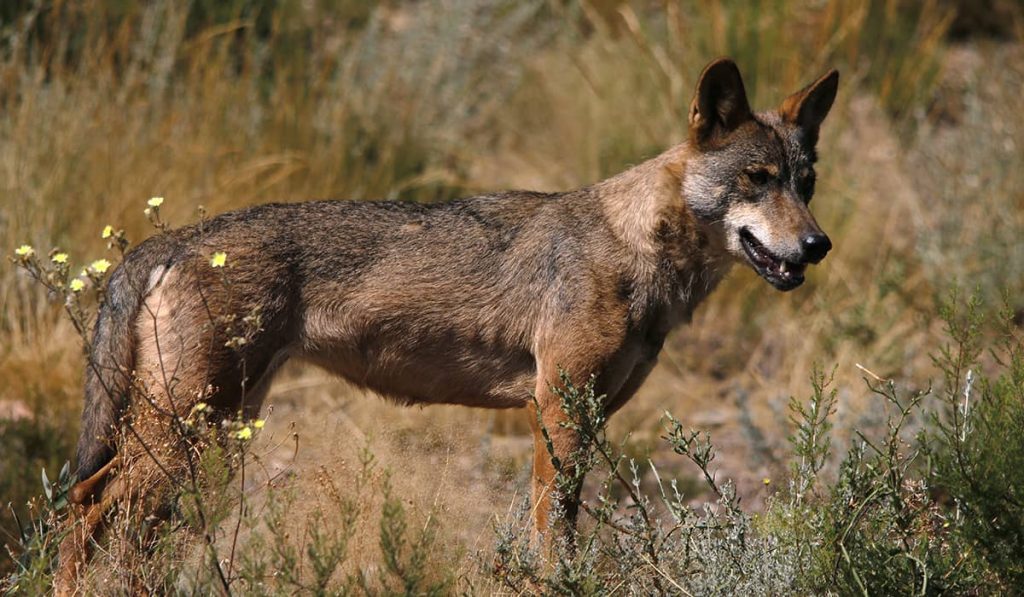 The Iberian wolf and its predatory pressure on free-ranging livestock is a classic example of the historical conflict between humans and a large carnivore species in Spain.

Obviously, this requires diverting the interest of large carnivores from attacking free-ranging livestock. The low effectiveness, the negative collateral effects and the social rejection of lethal control of predators –either by legal means, such as hunting; or illegal means, such as the use of poison– has generated a growing interest in the use of non-lethal strategies to manage predation.

Traditionally, this has required watching and guarding the livestock, as well as the use of livestock guarding dogs. Other more modern methods include the use of electric fences or auditory deterrents. In all cases, these are approaches that incorporate an increased social acceptability of predator management in ethical and welfare terms. However, recent studies have shown that, in many cases, the effectiveness of these deterrent interventions is also limited and/or that their implementation is very difficult or expensive, especially in remote areas.

A promising alternative could be the application of techniques of conditioned food aversion, which consist on using chemical substances in the prey (or in a surrogate) that produce an unpleasant adverse effect –vomiting, nausea and/or diarrhea– in the predator, so that the predator learns to reject this prey in later encounters by associating it with a taste or smell that causes discomfort. It is about triggering a natural survival mechanism that many predators develop to avoid the consumption of toxic or spoiled food once they have had a first bad experience.

Scientists from the Research Group in Game Resources and Wildlife Management and the Research Group in Wildlife Toxicology of the Instituto de Investigación en Recursos Cinegéticos (IREC – CSIC, UCLM, JCCM), in collaboration with other research centers, have advanced in the development of conditioned food aversion as a non-lethal management tool for the control of predation.

So far, they have managed to apply it successfully to protect nests of the red-legged partridge and other ground-nesting birds from red fox predation by inducing an aversion to taste, and to reduce the incidence of red fox predation on the rabbit during translocations by inducing an aversion to odor. The good results obtained led them to consider whether conditioned food aversion could be used to prevent wolf predation on livestock, thus contributing to guarantee its coexistence with the rearing of free-ranging livestock and, with it, the conservation of the wolf.

To solve this issue, the scientists of the IREC, in this case in collaboration with researchers from the Unidad Mixta de Investigación en Biodiversidad (UMIB-CSIC) of the Universidad de Oviedo and the Parque Zoológico de Córdoba, have studied the potential of conditioned food aversion by inducing an odor aversion experimentally, with captive wolves, as a first step towards the development of future field interventions aimed at reducing the number of attacks on livestock by wolves. 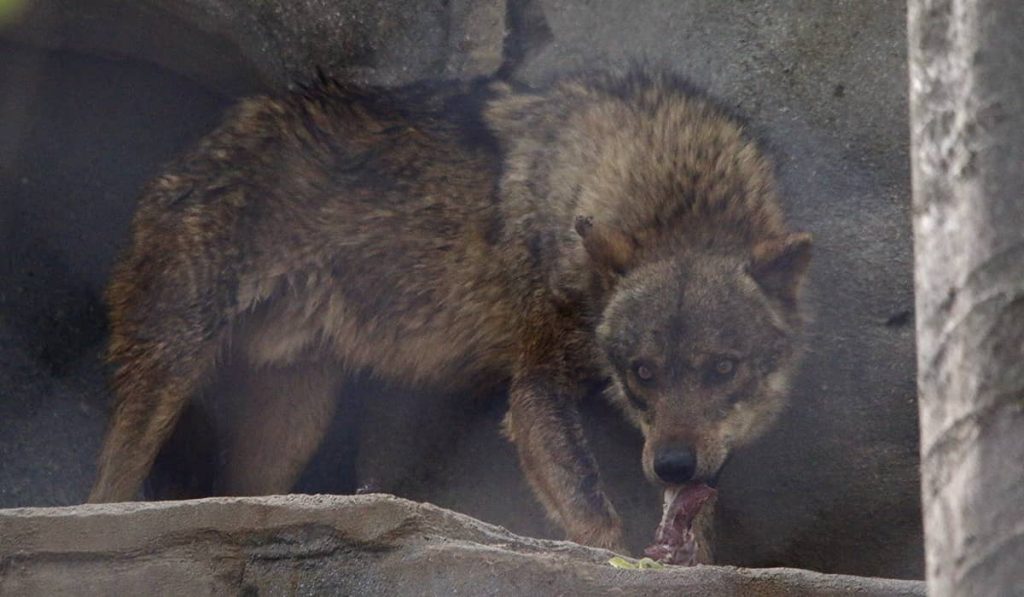 One of the Iberian wolves of the Parque Zoológico de Córdoba used in the experiment feeds on a piece of mouflon meat.

The researchers induced an aversion to odor in 5 wolves of the Parque Zoológico de Córdoba, using pieces of mouflon meat with an antiparasitic chemical substance that causes an unpleasant effect when consumed, and vanilla odor. The results obtained showed that, with only a punctual exposure to the antiparasitic, 4 of the 5 wolves used in the experiment developed an aversion to mouflon meat for at least one month. These animals learned that consuming meat with vanilla odor caused them discomfort, so they chose not to consume it in subsequent encounters for at least one month, when the meat no longer contained the antiparasitic.

After this period, the researchers reduced the amount of vanilla odor when feeding the wolves also with mouflon meat, causing 2 of the wolves that have developed conditioned aversion to eat the meat again. This indicates that the maintenance of conditioned food aversion by means of an odor signal depends on the presence of that odor. 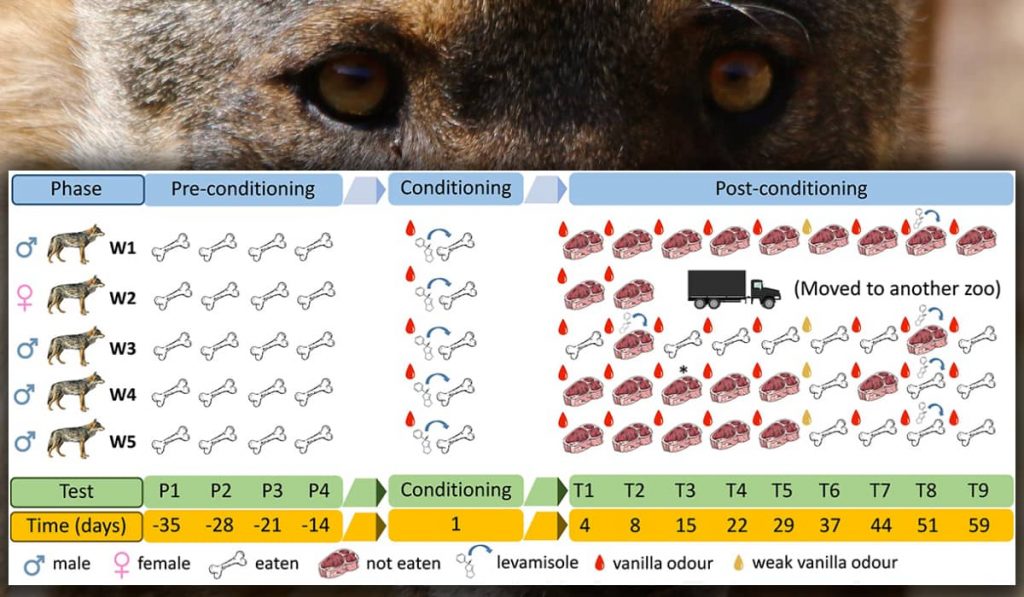 This research work demonstrates that the use of conditioned food aversion through an odor signal could be used in various ways to protect livestock from the wolf. On the one hand, it could allow the creation of a “buffer zone” with the odor to protect livestock in fenced areas. However, this strategy may have to be limited only to farms with a high frequency of attacks, due to the difficulty of applying it to all farms at risk, especially in complex livestock systems. This method can be safe for the predator because the aversive effect itself prevents repeated ingestions of the bait with the antiparasitic.

On the other hand, conditioned food aversion could be used in very specific cases to protect free-ranging valuable individuals, by attaching a device (for example, a collar) to them that can emit the odor cue. The development of such a device, with low maintenance and an easily rechargeable odor, may be essential for the implementation of conditioned odor aversion in free-range livestock in remote areas.

The development of this technique requires to be tested under field conditions to determine if it can effectively be included in the managing damage prevention "toolkit" of non-lethal interventions aimed at minimizing the predatory pressure of the wolf on livestock. In addition, its study in the field has the potential to offer other possible uses in wildlife conservation and management.