Presumed vulture attacks on live livestock have become a magnet for fake news that is causing people to see vultures as undesirable species, generating an unwarranted social alarm and environmental conflict that jeopardize their conservation.

As necrophagous birds, vultures have always provided farmers and society in general with a free service of enormous ecological and sanitary value, since their function is to "clean" our ecosystems of carcasses that would otherwise become waste and a source of diseases. However, this ancient alliance is seriously threatened by the growing social alarm and environmental conflict that cause people to perceive vultures as undesirable species, both of which have their origin in the presumed "attacks" by vultures on live and healthy livestock. 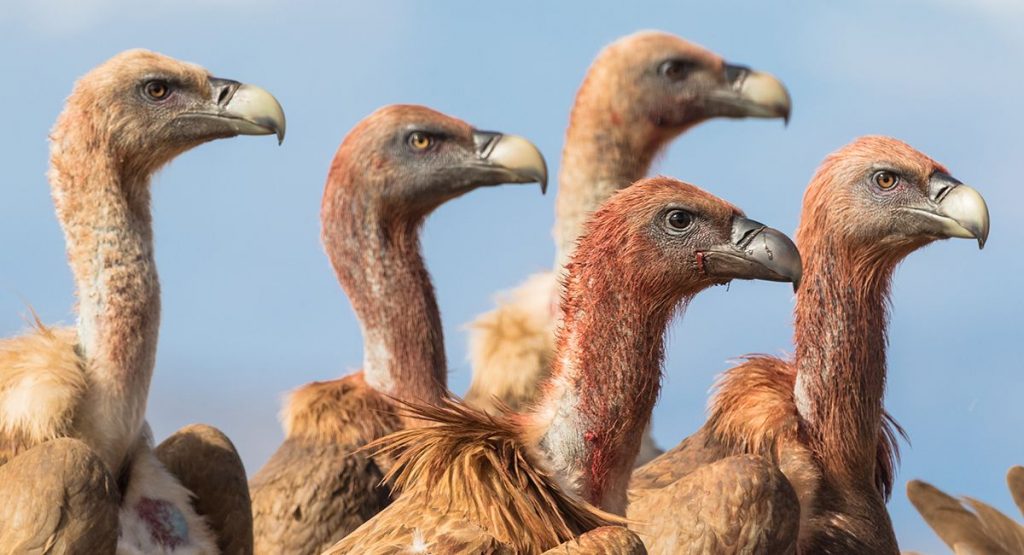 The attribution of attacks by vultures on live livestock is associated with one of the four species of scavenger birds that live in Europe: the griffon vulture (Gyps fulvus), whose European populations are mainly concentrated in Spain and France (Photo: Pilar Oliva-Vidal).

In a correspondence to the editor of the prestigious journal Nature Sustainability, the researchers Antoni Margalida, from the Instituto de Investigación en Recursos Cinegéticos (IREC – CSIC, UCLM, JCCM), and José Antonio Donázar, from the Doñana Biological Station (EBD - CSIC), explain that this situation is sadly derived, in large part, from misinterpretations and the general misuse of the subject by the media.

Although there is no a single documented case of vulture attack on live and healthy livestock in the scientific literature, this has become a highly controversial issue that is a magnet for fake news, especially in Spain and France, which concentrate the majority of the European populations on griffon vulture. Most of the news generated in this regard is usually accompanied by sensationalist press headlines and a lack of scientific rigour (and regretfully, sometimes even a lack of journalistic rigour).

Vultures are classified as obligate scavengers that specialize in the consumption of carcasses of large ungulates, because they cannot hunt.

To get an idea of the magnitude of the controversy, a search for “vulture livestock attack in Spain/France” on Google yielded 59 news stories in the period January to December 2019 alone. In most of these news, vultures were presented as animals undergoing behavioural changes driven by hunger, becoming predators of live animals including sheep, cattle, horses –and even dogs and humans– to survive.

The main argument used to justify vulture attacks on live livestock stems from the presumed reduction in the availability of carrion from livestock as a food resource as a result of the implementation of health policies derived from the appearance of bovine spongiform encephalopathy –popularly known as mad cow disease– between 2006 and 2011. Farmers were forced to collect their dead animals, so they could not leave them in the field as they had always done, thus livestock carcasses had to be managed by means of official systems of controlled withdrawal and destruction. At the same time, many feeding stations that scavengers often frequented were closed.

However, the reduced food availability is a shaky explanation to justify the presumed vulture attacks on live livestock, since the population of griffon vultures underwent –and undergoes– a growing demographic trend, a 18% rise from 2008 to 2018. Moreover, the complaints issued by presumed attacks of vultures on livestock did not disappear even after the implementation of more permissive sanitary regulations in 2012. Everything suggests that the knock-on effects of misinformation and a biased perception by farmers are playing an important part in this conflict, to the extend that demonstrations by farmers against large carnivores such as the brown bear (Ursus arctos) and the wolf (Canis lupus) have started to include the griffon vulture. 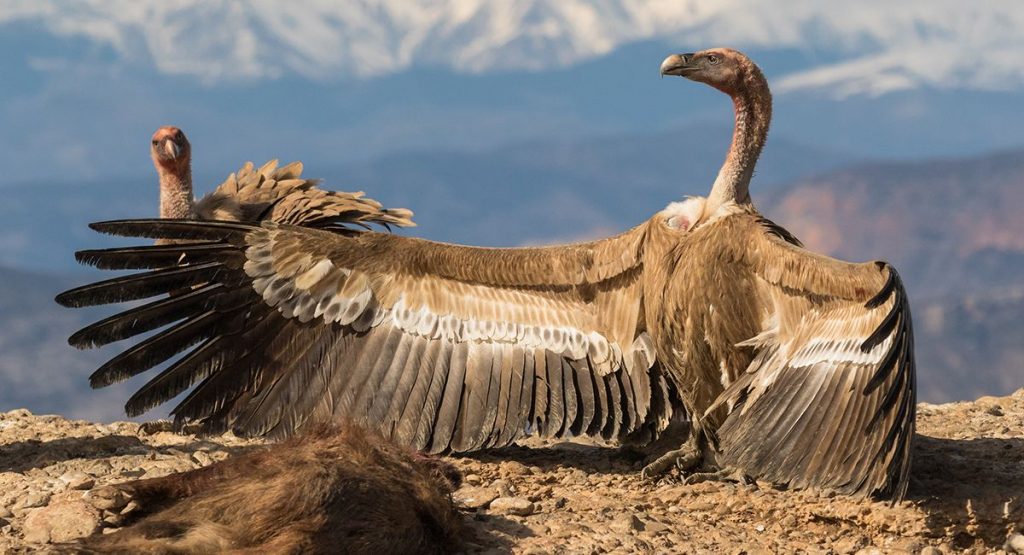 A greater tolerance of vultures to humans allows them to look for food in landfills or in the immediate vicinity of hunting or livestock facilities. The conflict between vultures and livestock makes some people take advantage of this circumstance to combat vultures through the illegal use of poisons (Photo: Pilar Oliva-Vidal).

The most worrying consequence of the conflict is that some people try to “seek for justice” through the application of illegal methods to control the populations on avian scavengers, including their deliberate poisoning by using poison baits. According to a WWF–SEO/BirdLife report, more than 8,000 cases of illegal poisoning were diagnosed from 1990 to 2015 in avian scavengers. Most of the species affected are seriously threatened, thus this kind of illegal actions could be a major risk for their conservation.

It doesn't seem to matter that more than 70% of the complaints are directly rejected because they are post mortem cases (the animal presumably attacked by vultures was already dead when the scavengers began to consume it), or that in 90% of the complaints that are investigated, a forensic veterinarian discards vultures as the cause of death or any type of injury to the animal presumably attacked.

In fact, the real number of cases in which the intake of an animal that is still alive by vultures is detected, cases that are always associated with non-supervised animals with a very unfavorable vital diagnosis due to other causes, is extremely low, and vultures are never identified as the primary cause of death. 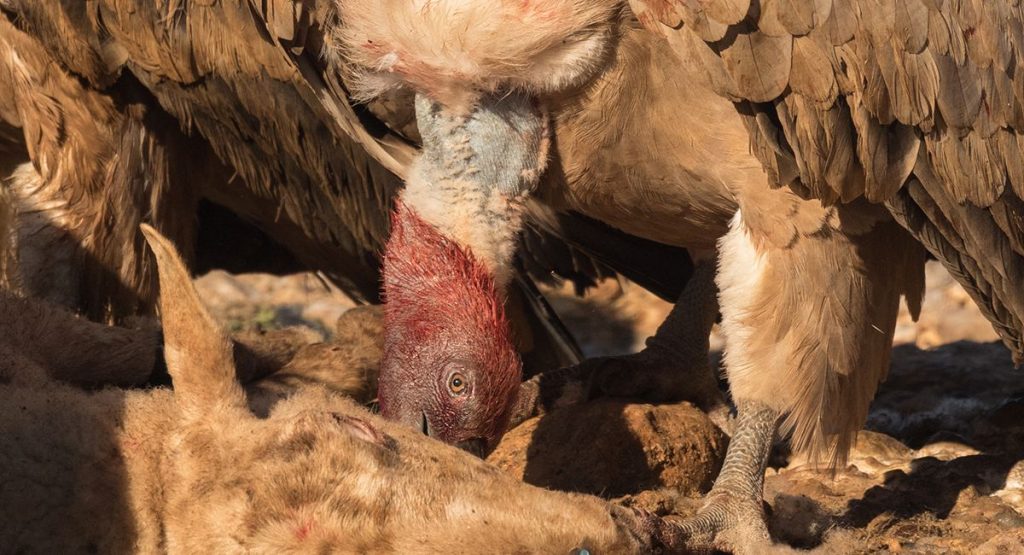 In Spain, it has been estimated that vultures can eliminate up to 200 tons of bones and more than 8,300 tons of rotten meat every year, which saves the country an estimated US $1.6 million. The artificial disposal of this waste would entail the emission of about 77,000 metric tons of carbon dioxide into the atmosphere and a cost for farmers, administrations and insurance companies of US $50 million (Photo: Pilar Oliva-Vidal).

The resolution of the conflict requires solutions adopted from both ecological and socio-economic approaches, and for this, scientists, veterinarians, farmers and policy-makers need to work together to reverse this growing negative perception of vultures as predators. In this regard, the media has a privileged position to value and widely disseminate the invaluable role of vultures and other avian scavengers as providers of ecosystem services.

The news items in relation to the conflict between vultures and livestock that leap into the media should not be exempt from a critical analysis by readers, listeners or viewers, and their credibility should largely depend on the use of arguments employed with scientific rigor. On the other hand, the photos, videos and stories on this matter that extend like wildfire in social networks should be perceived with great caution, and by recalling that only a forensic study of each case makes it possible to properly determine the cause of the death of an animal.

The original scientific statement is available at: