A multidisciplinary team of scientists provides the structural rationale for the interactions between the SARS-CoV-2 Spike viral complex protein and the ectoparasite ACE proteins suggesting these species would bind the viral SARS-CoV-2 Spike protein, raising concerns of a possible role in passive transmission of the virus to their human hosts.

Host–vector–pathogen molecular interactions evolved as conflict and cooperation. In this way, arthropods may benefit from host factors and pathogen‐induced gene expression that favor tick feeding and fitness, midgut microbiota composition and changes in epigenetic regulatory mechanisms that facilitate tick survival under extreme environmental conditions, which results in evolutionarily conserved mechanisms that support pathogen infection with increased ectoparasite fitness and survival.

Coronavirus‐like organisms have been previously identified in Arthropod ectoparasites (such as ticks and unfed cat flea). Yet, the question regarding the possible role of these arthropods as SARS-CoV-2 passive/biological transmission vectors needs to be explored. 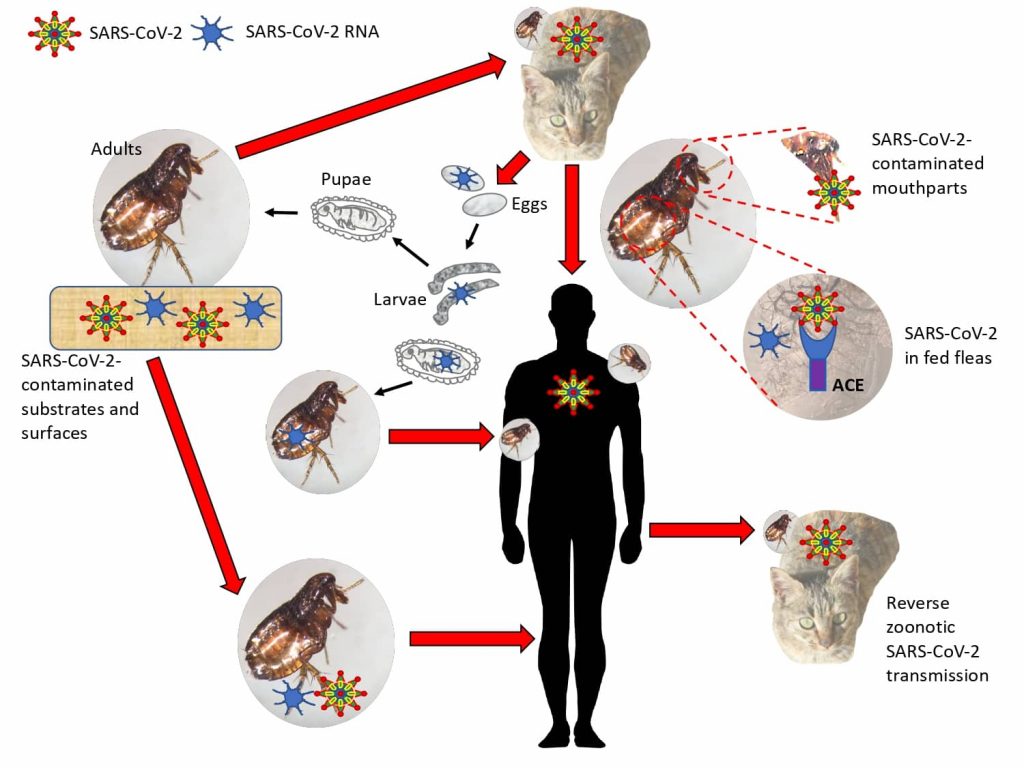 In this study were performed a number of in silico protein structural and binding energy calculations to assess one of the steps in arthropod–pathogen interactions that may be associated with the risks of possible ectoparasite vector transmission. Since the complex formed between SARS‐CoV‐2 Spike protein and the human ACE2 receptor has been structurally determined (PDB code 6M0J), it was possible to asses (i) whether the similarity of ectoparasite ACE proteins to human ACE2 was sufficient to model the SARSCoV-2Spike: ACE complex and (ii) assess the impacts of any residue mutations in ectoparasite ACE on the stability of this complex. We also performed detailed structural analyses to explore and characterize the possible structural mechanisms affecting complex stability.

This was the objective of a multidisciplinary team of scientists born from the collaboration between the Research Group in Health and Biotechnology (SaBio) of the Instituto de Investigación en Recursos Cinegéticos (IREC – CSIC, UCLM, JCCM) and the Institute of Structural and Molecular Biology (UCL) of London (United Kingdom), the Department of Applied Physis of the Faculty of Science and Technology of the Universiti Kebangsaan Malaysia (Malaysia) and the Centro Regional de Investigaciones Biomédicas (CRIB) of the Universidad de Castilla-La Mancha (UCLM).

It is crucial to understand the structural analyses that provide structural rationale for interactions between the viral Spike and the ectoparasite ACE proteins. Although we do not have experimental evidence of infection in these ectoparasites, the predicted stability of the complex suggests this is possible, raising concerns of a possible role in passive transmission of the virus to their human hosts.