Researchers from several scientific institutions assess the risk that veterinary non-steroidal anti-inflammatory drugs pose to vultures in the Iberian Peninsula, a crucial enclave for the conservation of the European populations of avian scavengers.

In the early 2000s, the world of biodiversity conservation shook with the discovery of the cause that had brought Asian vultures close to extinction. It was nothing more than exposure to diclofenac, a veterinary anti-inflammatory and analgesic drug that had been massively used in India, Pakistan and Nepal since the late 1990s.

This drug, which is used to alleviate the ailments of livestock, is highly toxic for birds, and when it accumulates in the tissues of treated animals, vultures that feed on their carcasses are seriously intoxicated. In just 15 years, diclofenac killed about 40 million vultures, wiping out nearly 99.9% of their populations in the Indian subcontinent. 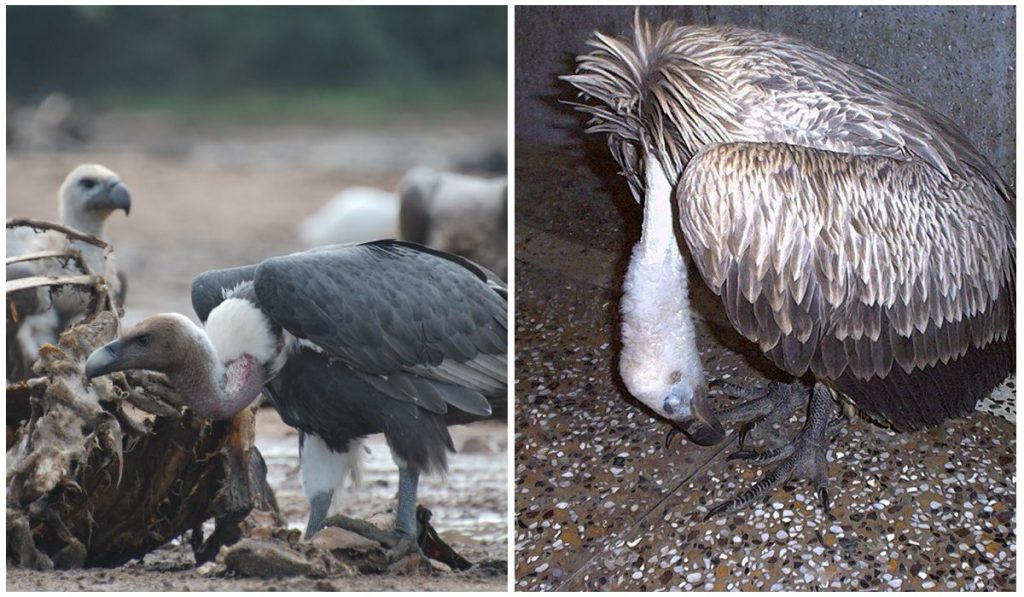 Exposure to diclofenac caused the practical disappearance of 3 species of Gyps vultures in the Indian subcontinent. The ban on the veterinary use of this drug helped to slow down the dramatic decline of avian scavengers in Asia, although it is still detected in the carcasses of livestock, in some cases at lethal levels for vultures (Photos: Nikita Prakash).

The scale of the catastrophe and the pressure from the scientific community led several Asian countries to ban its veterinary use between 2006 and 2010, which helped to slow down the dramatic population decline of avian scavengers in Asia. Despite this, a few years later, in 2013, the veterinary use of diclofenac was authorized in several European countries, including Spain. This is a particularly worrying fact due to the risk that it can pose for avian scavengers, since the Iberian Peninsula holds almost 95% of the European vulture populations, being a crucial enclave for their conservation.

Currently, the veterinary use of a total of 11 non-steroidal anti-inflammatory drugs (NSAIDs) is authorized in Spain, including diclofenac, and most of them are considered potentially toxic to scavengers. However, until now, the prevalence of these drugs in the carcasses of livestock that are provided to vultures is still unknown, as well as their incidence on Iberian vulture populations and the risk they pose to their conservation..

Addressing these questions was the fundamental objective of a scientific work led by the Research Group in Wildlife Toxicology of the Instituto de Investigación en Recursos Cinegéticos (IREC – CSIC, UCLM, JCCM), which was developed with the participation of the Universidad Autónoma de Barcelona, the University of the Highlands and Islands (United Kingdom) and the University of Aveiro (Portugal), and whose results have just been published in the journal Environmental Pollution.

Results have shown the presence of NSAID residues in 4.4 and 3.2% of the sheep and pig carcasses analyzed, respectively, specifically flunixin (in 1.8% of the carcasses), ketoprofen, diclofenac and meloxicam (all three in 0.4% of carcasses). Forensic analyses showed that 14 avian scavengers (3.6% of the studied population) had residues of flunixin (1%) and meloxicam (2.6%) in the kidneys and liver. For three of the Griffon vultures analyzed, levels of flunixin were associated with acute kidney damages (visceral gout) similar to those recorded in Asian vultures lethally poisoned with diclofenac.

In light of these results, at the moment, there is no evidence of a population level impact of diclofenac use in livestock on European vultures, at least at current levels of use, especially considering that the Iberian population of Griffon vulture has increased more than 21% over the past decade. However, the presence of diclofenac in one carcass indicates a failure in the formulation advisory systems in Spain, which states that “diclofenac treated animal carrion should never reach the trophic chain of wild animals”.

On the other hand, the veterinary use of flunixin could pose a clear and immediate risk for the conservation of avian scavengers, thus the authors of the study point out the need that this same safety specification should be applied to the formulation of this compound and other NSAIDs marketed in Spain known to be toxic to scavengers.

The authors conclude that an effective risk assessment for veterinary drugs must always consider the possibility that these may enter wildlife food webs through a livestock carrion pathway. In this regard, monitoring efforts to study causes of mortality in Iberian avian scavengers must contemplate the study of poisoning associated with exposure to NSAIDs. Finally, they highlight that farmers, veterinarians and wildlife technicians in charge of managing supplementary feeding stations or the disposal of carrion in the field must be aware of the risks that pharmaceutical treated livestock may represent for avian scavengers, so that their safety is guaranteed.