Floodplains provide human society with many important ecosystem services, since they retain and purify water, sequester carbon, and generate habitats that host high levels of biodiversity. However, these natural systems are especially vulnerable to environmental degradation, which is why they are among the most threatened types of wetlands.

In Spain, the floodplain formed by Las Tablas de Daimiel is the last representative of an ecosystem known as “fluvial tables”. Generated by the overflow of the Guadiana and Cigüela rivers, Las Tablas de Daimiel were declared as National Park in 1973 and as Biosphere Reserve in 1981. Despite this, this natural area presents an unfavourable conservation status.

In addition to groundwater extraction for irrigation, Las Tablas de Daimiel must withstand the input of insufficiently treated effluents from wastewater treatment plants and the run-off from farmland soils, which can cause the accumulation of potentially toxic trace elements in the sediment of this valuable floodplain wetland. To this must be added the overabundance of an invasive freshwater fish, the common carp (Cyprinus carpio), which affects aquatic vegetation directly by consuming the chara (Chara spp.), a macrophyte that is in the basis of the floodplain ecology, and with this the physic-chemical characteristics of the water column. 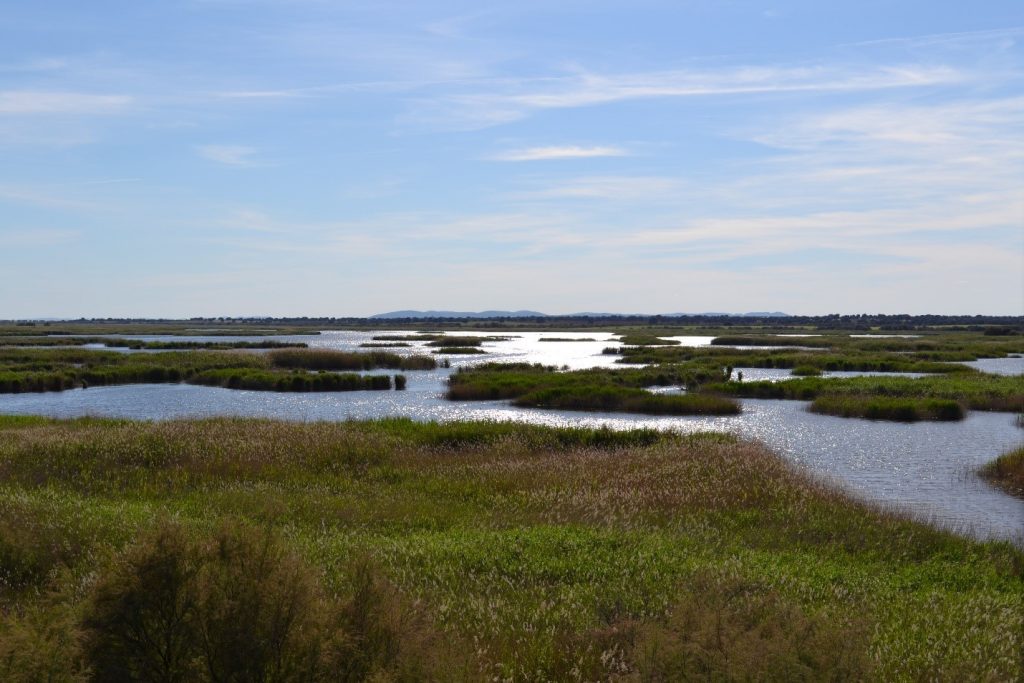 Las Tablas de Daimiel, located in the province of Ciudad Real (Castilla-La Mancha, Spain), is a natural area declared as National Park and as Biosphere Reserve, but also as Ramsar site since 1982 and as Special Bird Protection Area since 1988.

To ameliorate the situation generated by carps, the authorities of Las Tablas de Daimiel National Park have carried out a selective fishing program to control the carp overpopulation, as well as the presence of other exotic species of fish. These captures are treated as waste, but their processing for commercial use could constitute a sustainable alternative. On the other hand, sport fishing is a common activity along the Guadiana basin. However, it is not known the amount of contaminants that these fish can accumulate in the area and the implications in terms of food safety for the human consumers of captured fish.

Scientists from the Research Group in Wildlife Toxicology of the Instituto de Investigación en Recursos Cinegéticos (IREC – CSIC, UCLM, JCCM), in collaboration with researchers from the Faculty of Environmental Sciences of the Universidad de Castilla-La Mancha (UCLM), have studied the accumulation of arsenic (As), cadmium (Cd), mercury (Hg), lead (Pb) and selenium (Se) in the muscle of 6 fish species (5 of them exotic) from Las Tablas de Daimiel subjected to selective fishing, in order to use them as bioindicator species and determine the safety of its consumption by humans and the potential ecotoxicological implications for the wetland food chain. 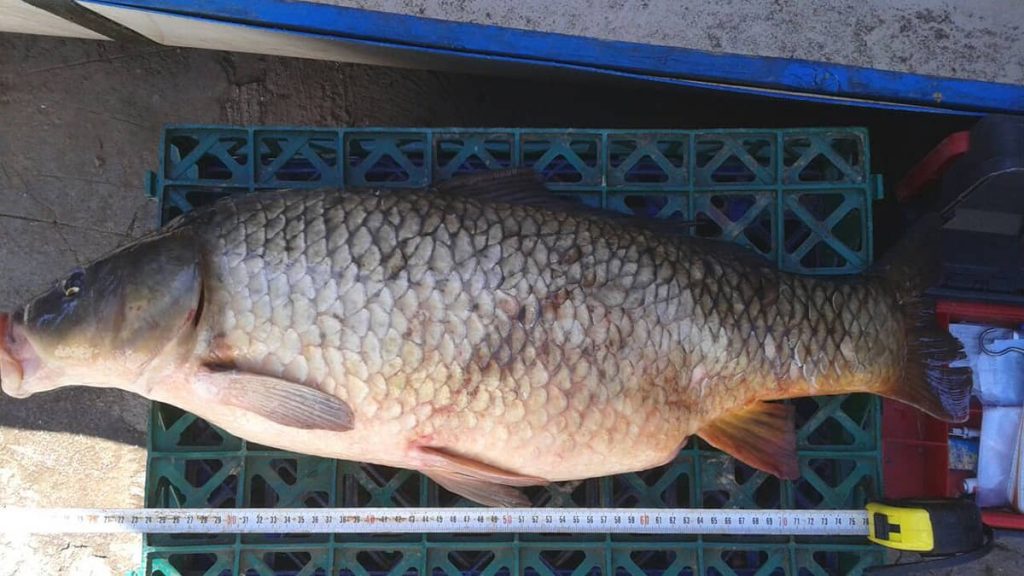 The common carp (Cyprinus carpio) was one of the fish species studied. Other fish species analysed were the Iberian chub (Squalius pyrenaicus), the black bullhead (Ameiurus lies), the pumpkinseed (Lepomis gibbosus), the largemouth bass (Micropterus salmoides) and the goldfish (Carassius auratus).

Results showed that muscles of the black bullhead, which is a predatory species, had significantly higher Hg concentrations than omnivorous (such as the Iberian chub or the pumpkinseed) or herbivorous species (such as the common carp), but As, Pb and Se levels lower than them. In both the black bullhead and the common carp, the concentration of Hg was positively associated with fish size, which respond to the capacity of the organic form of Hg to bioaccumulate and biomagnify.

The observed muscle Se concentrations in fish from Las Tablas de Daimiel might be associated with adverse effects on fish such as blood changes, reduced growth, mortality of juveniles and reproductive failure, and this may be due to the fact that the Cigüela river drains some areas in its upper basin that are rich in this metalloid.

Regarding food safety, 6% of the common carps and about 12% of the Iberian chubs showed Pb muscle concentrations above the maximum residue levels established by the European legislation for human consumers. On the other hand, these abnormal Pb concentrations could be associated with changes in physiological and biochemical functions in fish, damages in the nervous, haematological, immunological and cardiovascular systems and oxidative stress.

This abnormal Pb accumulation may be associated with point sources like the ingestion of spent Pb shot pellets, since Pb shot density in this wetland remains high nowadays (100 pellets/m2 in the first 20 cm of the sediment), despite the ban of hunting since 1965. However, the examination of the stomach of fish would be necessary to confirm Pb shot ingestion as the source. 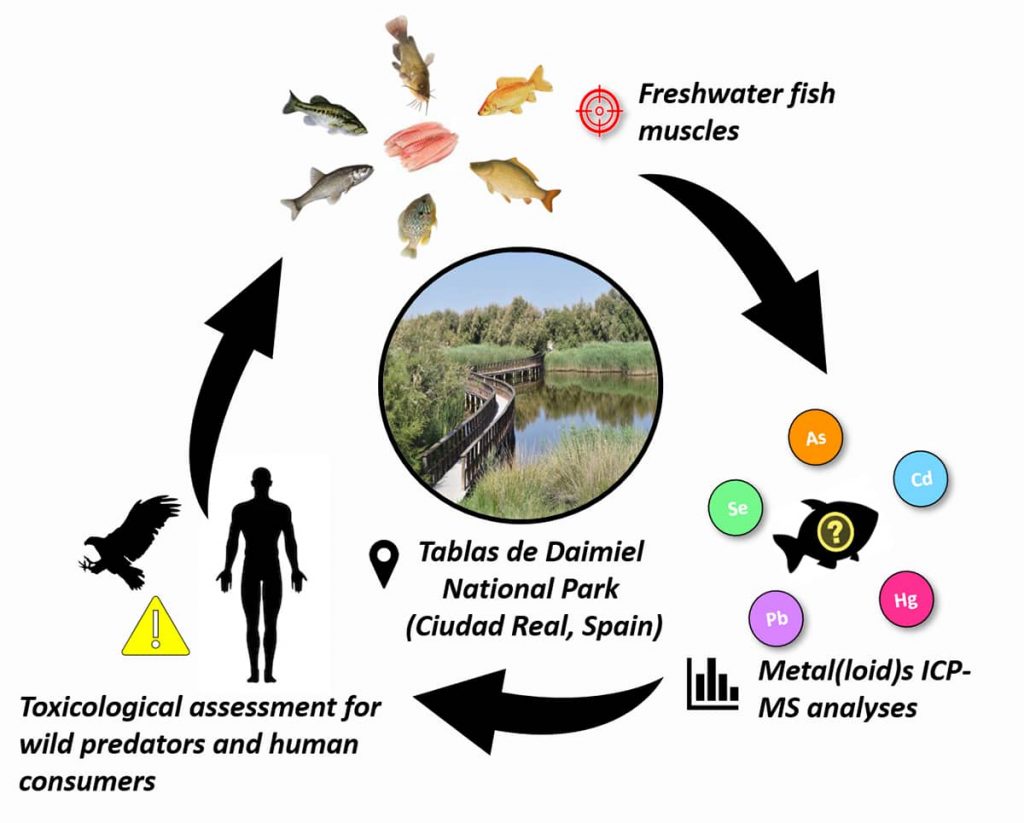 As a whole, results of this research work suggest that the fish community in Las Tablas de Daimiel National Park faces a low risk of exposure to contaminating metals and metalloids. However, the sources of potentially toxic trace elements in this National Park can be diverse and some of them must be traced more in depth. On the other hand, the authors suggest that regular monitoring would allow health and environmental institutions to be aware of the balance between risk and benefit of fish consumption in humans in the upper Guadiana river basin.