The analysis of the accumulation of highly toxic metals, such as lead (Pb) and mercury (Hg), in bird feathers highlights the need to remediate the pollution problems derived from former mining districts as a measure of biodiversity conservation

Metal mining is one of the human activities that generates a severe environmental impact, especially when it focuses on the exploitation of metals that, like lead (Pb) and mercury (Hg), are highly toxic. Once these metals are released into the environment, they are dispersed through water, atmosphere and soils, thus animals and plants are potentially exposed, being able to incorporate them into their tissues and, consequently, generating toxicity and food safety problems.

In natural areas affected by Pb and Hg mining, it is essential to biomonitor contamination levels over time, that is, to assess the degree of exposure of wildlife to these metals and their potential effects on health, in order to evaluate the associated risks and prevent impacts on biodiversity conservation. 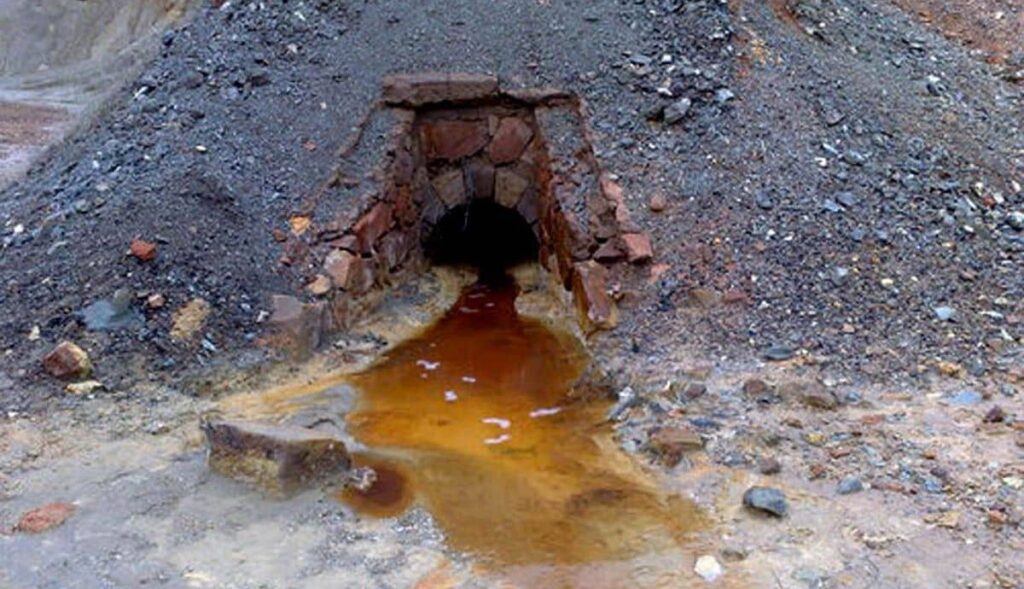 In the former mining districts of Almadén and Valle de Alcudia (Ciudad Real), devoted to Hg and Pb exploitation, respectively, the abandonment of mining residues has led to the widespread dispersion of toxic metals such as Hg and Pb into the local environment, impacting river courses, soils and pasturelands, which has originated a severe problem of environmental pollution with potential negative consequences for wildlife and threats to food safety.

The ideal way to carry out this biomonitoring would be to analyze the accumulation of metals in internal organs such as the kidneys, liver or bones of animals, since they play a key role in their metabolism, excretion and accumulation. However, measuring metal concentrations in these organs necessarily involves sacrificing individuals, so that it is convenient to optimize and validate the use of other “non-destructive” or non-invasive biological matrices, such as bird feathers, which are also excellent bioindicators of environmental pollution.

Scientists from the Research Group in Wildlife Toxicology of the Instituto de Investigación en Recursos Cinegéticos (IREC – CSIC, UCLM, JCCM), the National Veterinary Research Institute (Poland), the Instituto Regional de Investigación y Desarrollo Agroalimentario y Forestal de Castilla-La Mancha (IRIAF) and the University of Calgary (Canada) have investigated how wild birds that inhabit natural areas affected by contamination from former mining areas are exposed to metals such as Pb and Hg, as well as the factors that determine the accumulation of these metals in feathers.

The research work considered as study area the former Almadén Mining District, which was the largest mercury producing area in the world until the end of the 20th century; and the former Alcudia Valley Mining Distric, which was a major lead-producing area in Spain until the end of the 19th century; both in the province of Ciudad Real. After centuries of extensive exploitation, part of the mining operations and their residues (in form of spoil heaps, tailing ponds and other mining residues) in both districts were abandoned in the absence of restoration or rehabilitation processes after closure, originating severe problems of environmental pollution. Other areas, such as the Almadén mine dump, have been restored but the contamination released during mining still persists in their surroundings and the rivers in the area. 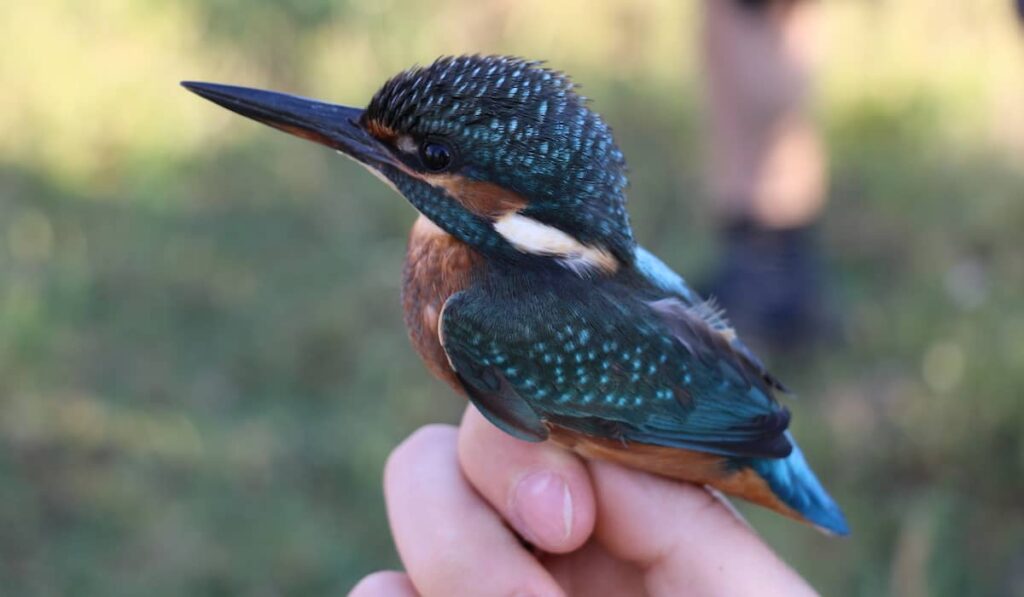 The study included the analysis of feathers from a total of 168 individuals of 26 bird species, with different feeding habits and migratory patterns, in both mining districts and in a reference area, free of mining contamination. One of the species studied was the common kingfisher, which is the bird species that accumulates the highest levels of Hg in the Almadén area.

As might be expected, feathers of birds that inhabit natural areas affected by former metal mining in both mining districts accumulated high levels of Hg (Almadén) and Pb (Valle de Alcudia) compared to the birds sampled in the reference area.

Within the mining areas, not all bird species accumulated metals in the same way, but it varied depending on their trophic position. Thus, granivorous birds (such as the European goldfinch, Carduelis carduelis) accumulated the lowest levels of mercury in their feathers, compared to birds with omnivorous (such as the Eurasian blackbird, Sylvia blackbird), insectivorous (such as the Eurasian hoopoe, Upupa epops) or piscivorous feeding habits (such as the common kingfisher, alcedo atthis). These differences may be due to a higher intake of methylmercury (MeHg), a chemical form of Hg that is highly bioaccumulative, depending on whether bird species are higher up in the food chain.

Regarding lead, concentrations accumulated in the feathers of granivorous and omnivorous birds were about twice in comparison with those of insectivorous and granivorous bird species. These differences can be associated with a greater intake of grains, seeds, herbs and fruits, and even small amounts of soil and gastroliths (small stones that herbivorous birds ingest to help grind food in the gizzard), contaminated by dust with high Pb levels. 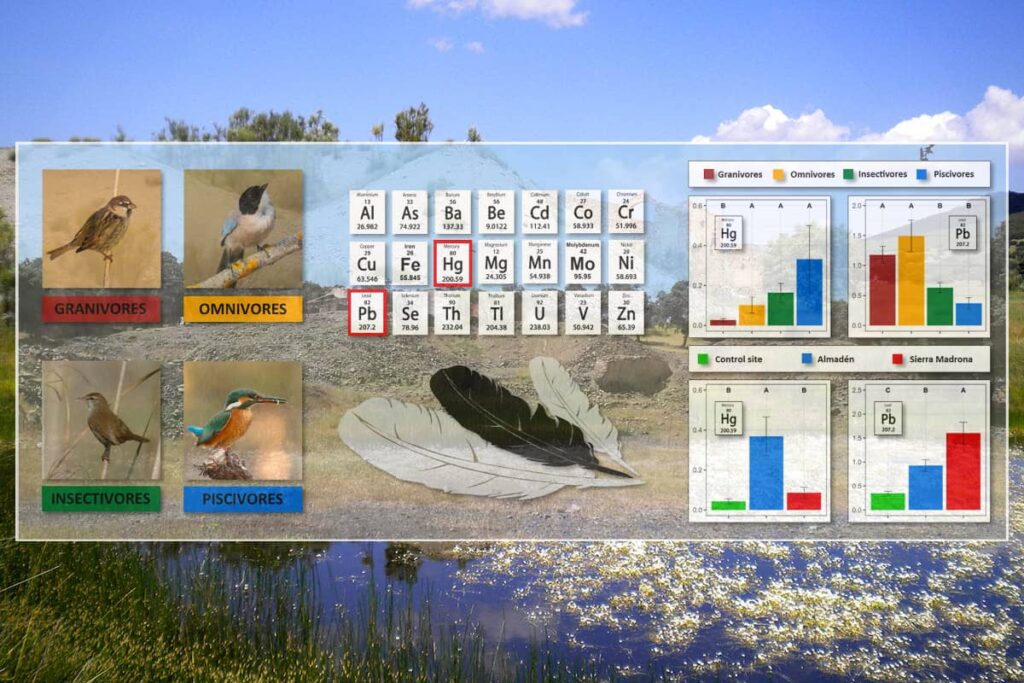 These results show that avifauna inhabiting ecosystems affected by metal contamination from former mining districts, such as Almadén and Valle de Alcudia in the province of Ciudad Real, may be exposed to potentially toxic levels of metals, such as Hg and Pb, which in some cases can be high enough to compromise their health. Thus, the present work evidences the need to adopt measures that prevent or minimize the exposure of wildlife to this contamination in order to secure these areas to protect local wildlife from exposure to toxic elements.