In the last decade, the population of red-legged partridge has decreased by 51%, the decline being steeper in areas where more grasslands have been lost and where the surface of tree crops has increased.

The red-legged partridge (Alectoris rufa) is a common species of southwestern Europe, whose natural populations mainly inhabit the Iberian Peninsula, where it has great socioeconomic and ecological importance, being one of the main small game species in Spain and an important trophic resource for many Iberian predators. It is a generalist species, inhabiting both natural environments and agricultural mosaics, although nowadays, the most favorable areas for the red-legged partridge are dominated by farmland.

As many other species, red-legged partridge populations in Spain declined sharply in the second half of the 20th century, according to variation in hunting bags. This decline could be due to forest encroachment and to changes in farmland associated with agricultural intensification, such as the loss of habitat heterogeneity, the advance of cereal harvesting and the use of agrochemicals. This decline may have continued in recent decades, but the magnitude of recent population declines is less well quantified (and even questioned by certain hunting sectors). 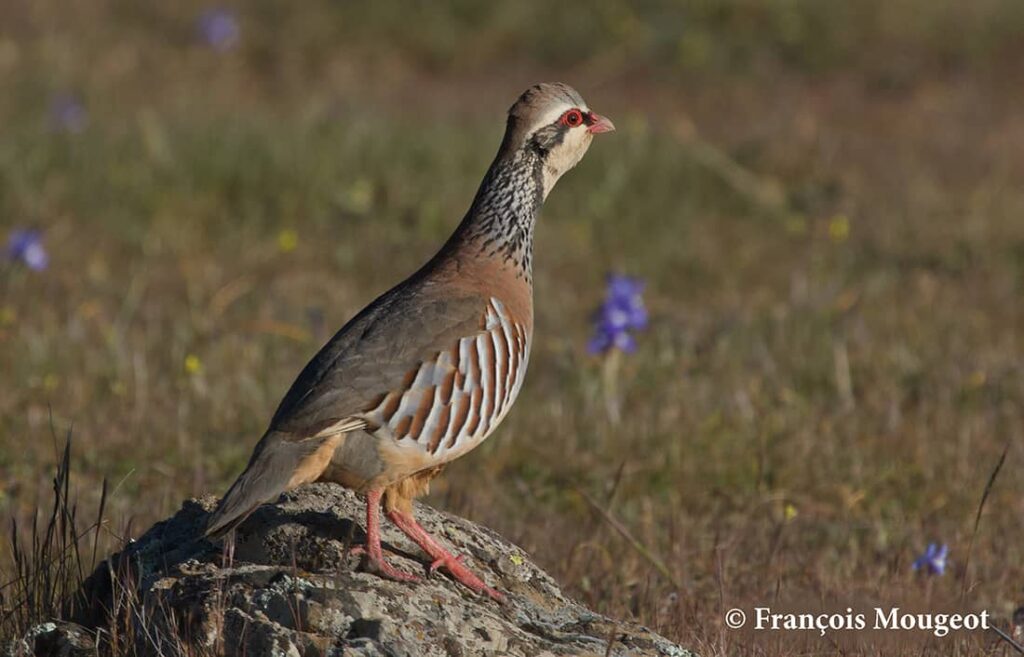 The red-legged partridge has great socioeconomic and ecological importance in the Iberian Peninsula (Photo: François Mougeot).

Now, scientists from the Research Group in Game Resources and Wildlife Management of the Instituto de Investigación en Recursos Cinegéticos (IREC – CSIC, UCLM, JCCM), ), in collaboration with scientists from the Department of Zoology and Animal Cell Biology of the University of the Basque Country (UPV/EHU) and from the Department of Animal Biology of the Universidad de Málaga, have studied the relationship between red-legged partridge density (assessed through advanced statistical models that take detectability into account) and the composition and management of agricultural land. They have also estimated the population trend of the species in the region during the last decade and its relationship with changes in the composition of the agricultural landscape. This study is based on data collected by the wardens of the Junta de Comunidades de Castilla La-Mancha between 2010 and 2017 as part of the regional monitoring program coordinated by the Fish and Game Service.

The results obtained in this work show that red-legged partridge abundance is closely related to farmland composition and farming practices. The abundance of this species is positively related to the extent of natural vegetation (particularly pastures) and traditional rainfed vineyards, but negatively related to the extent of irrigated vineyards and tree crops. Additionally, some limiting climatic factors for red-legged partridge populations are also described, such as low winter temperatures and high autumn rainfall. 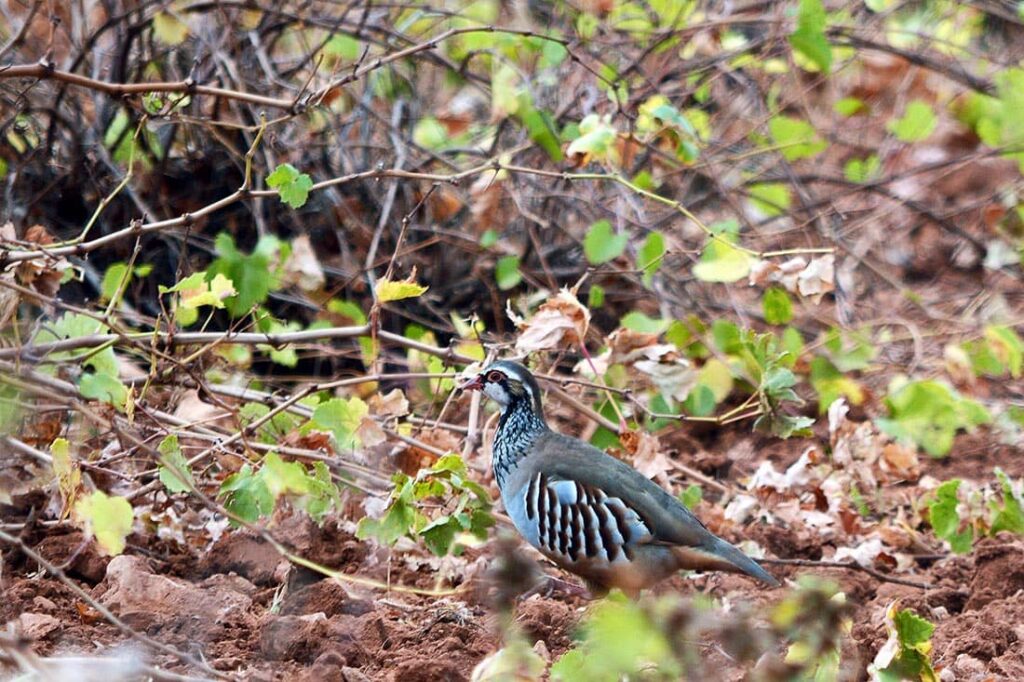 The abundance of the red-legged partridge is positively related to the extent of natural vegetation and traditional rainfed vineyards (Photo: Xabier Cabodevilla).

In this respect, the study shows that at a higher proportion of irrigated vineyards in the landscape is associated with a lower abundance of red-legged partridge, but this negative relationship is mitigated in areas sensitive to nitrate pollution, where there are limitations on the amount of fertilizer that can be applied to irrigation water. This suggests that fertigation could be an important ecological trap for this and other species.

The study also shows that the red-legged partridge population has suffered a population decline of 51% between 2010 and 2017 in Castilla La-Mancha, which is one of the most important regions for the species. It is worth noting that the decline was not linear throughout the study period, but occurred mainly in two years (2013 and 2014) with periods of relative stability before and after. This suggests that the decline may be due to one-off stochastic events leading to particularly poor survival or reproduction in particular years, but that current environmental or demographic conditions prevent the population recovery.

On the other hand, consistent with the results on abundance, red-legged partridge population trends are modulated by land-use changes: the decline is more marked where the proportion of grassland (natural vegetation) has decreased more, and where ecological tree crops have increased more. 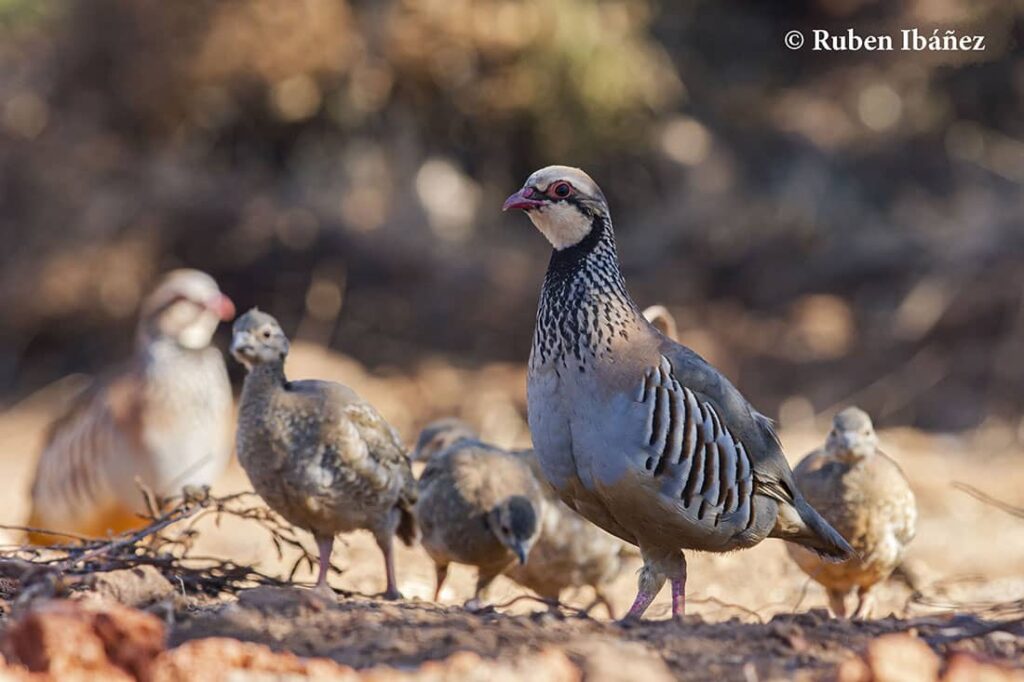 The red-legged partridge population has suffered a population decline of 51% between 2010 and 2017 in Castilla La-Mancha (Photo: Rubén Ibáñez).

This result highlights the delicate situation of this emblematic species of great socioeconomic and ecological importance. Scientists, public institutions, farmers and hunting federations should work together to solve the conservation problem that the red-legged partridge suffers. Possibly the conservation of this species requires rethinking agricultural policy, avoiding intensification and excessive use of agrochemicals, restricting the expansion of tree crops and encouraging patches of natural or semi-natural vegetation, while ensuring that hunting is carried out in a sustainable manner.

In addition, the results of this study emphasize the need for continuous monitoring of the species and also provide relevant information for future monitoring. The results indicate that the best time to carry out red-legged partridge counts (within the study's period, between April and July) is at the end of April/beginning of May or in July. In terms of sampling time, conducting counts at dawn seems to be most efficient in early spring, while in July it seems more appropriate to conduct counts at dusk. This should be taken into account when designing monitoring programs. Either way, the study also shows that it is advisable to use repeated counts to account for detectability during the modeling process in order to obtain more accurate abundance estimates.

Overall, the results obtained in this study highlight the value of agricultural mosaic landscapes for farmland birds, such as the red-legged partridge. An agricultural landscape that combines the traditional rainfed cereal system with plots of natural herbaceous vegetation (such as pastures and boundaries) and crops with abundant vegetation cover (such as traditional rainfed vineyards), thus offering foraging sites and shelter to avoid predators and high summer temperatures.