The European turtle-dove (Streptopelia turtur) has suffered a significant population decline, of up to 78%, throughout its distribution range in Europe, which has led to its classification as a "Vulnerable Species" by the International Union for Conservation of Nature (IUCN). This decline has been especially pronounced in the European western migratory flyway of the species, which includes Spain, a country that supports more than 40% of the entire breeding population of the species in Europe and 75% of the population that use this migratory route.

Given the importance of Spain as a breeding area for the species, any change in the status of the European turtle-dove in our country could have dramatic consequences for the entire population in Europe. For this reason, it is essential to pay attention to its conservation in Spain, and for this, it is necessary to quantify its population trend at a national scale, and to identify whether this trend vary between more or less favourable areas for the species or depending on land uses, in order to identify factors that can limit its distribution and abundance. 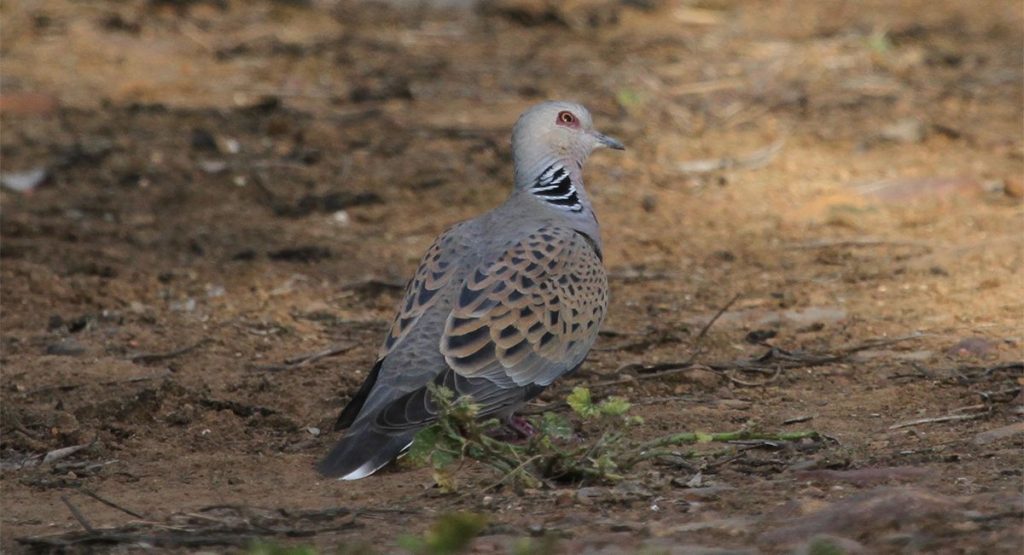 The European turtle-dove (Streptopelia turtur) is a long-distance migratory bird that spends winters in sub-Saharan Africa and breeds across a large area of the Western Palaearctic, from the Iberian Peninsula to Russia.

Scientists from the Research Group in Game Resources and Wildlife Management of the Instituto de Investigación en Recursos Cinegéticos (IREC – CSIC, UCLM, JCCM) and the Centre for Conservation Science of the Royal Society for the Protection of Birds (RSPB) , have used the data from the monitoring programme for common breeding birds (with the Spanish acronym, SACRE) of the Spanish Ornithological Society (SEO/BirdLife) to analyze in detail the changes that have occurred in the abundance of the European turtle-dove in Spain between 1996 and 2018. In addition, they have developed an environmental favourability model based on data on the presence and absence of the species in relation to topo-climatic and land use variables (habitat type), taking 10 km2 -UTM squares as unit of measurement. Finally, they have evaluated whether population trends vary in space based on land uses or environmental favourability.

Statistical analyzes of the data, which took into account possible biases in the SACRE (such as the non-homogeneous spatial distribution of sampling) reveal that the Spanish population of European turtle-dove has decreased by 37% over the past two decades. If we take into account the importance of the European turtle-dove breeding population in Spain for the entire migrant population through the western migratory flyway, these results acquire an European relevance and confirm the designation of the conservation status of the species as “Vulnerable”. 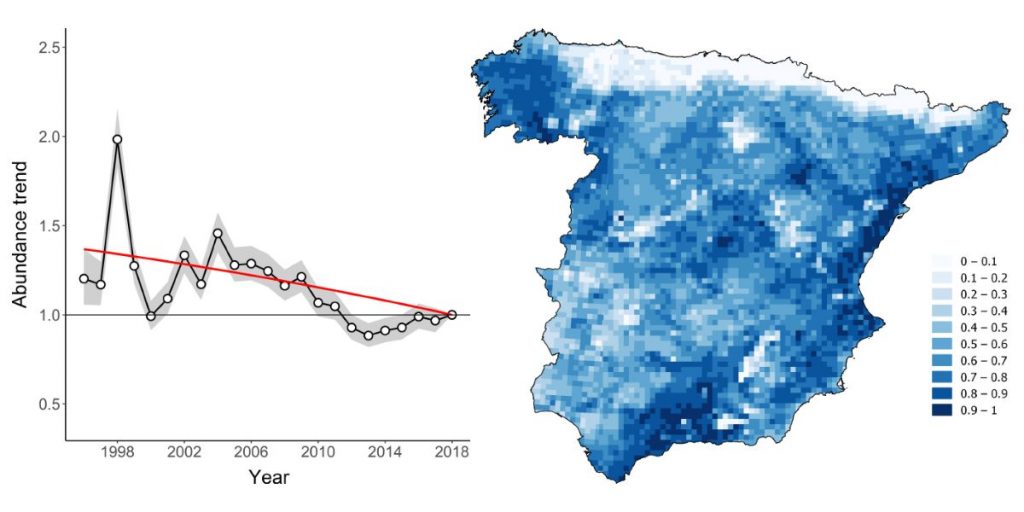 Finally, the work shows that spatial variation in population trends is associated with the type of habitat: the areas where populations have declined more markedly are characterized by the abundance of arboreal habitats such as pine forests, sclerophyllous vegetation or transitional woodland shrubs, whereas populations in agricultural habitats are more stable, or have even increased in areas with complex cultivation.

Thus, positive trends in areas with complex cultivation (which are lands with small parcels of mixed crop types, including woody crops and pastures) reinforce the importance of extensive agricultural practices for this species. The declines associated with forest habitats may indicate that these have changed over time towards a more dense and homogeneous vegetation structure, lacking open areas that provide the herbaceous vegetation that turtle-doves require for feeding.

We know that agricultural intensification, the incidence of certain parasitic diseases and an unsustainable hunting pressure can play a prominent role in the overall population decline of the European turtle-dove. Thanks to this work, we now also know what types of habitats are the most suitable to provide turtle-doves with the best areas for breeding and feeding.

In this regard, it is particularly important to assess how forest management has evolved in recent decades and the impact that this may have had on the species, in order to use this information in designing adequate measures for the recovery of the species, since much more emphasis has been placed on agricultural intensification as a determinant of its decline to date.

The Research Group in Game Resources and Wildlife Management of the IREC is already working on the development of adaptive strategies of game management that guarantee the long-term viability of the European turtle-dove. Likewise, thanks to a project funded by the Fundación Biodiversidad, it is also working on the evaluation of the habitat factors that influence the improvement of the productivity and survival of the species, which will allow discovering the types of resources that the different habitats provide to turtle-doves.

In addition, through a project funded by the Spanish National Program for Research, Development and Innovation Oriented to Society Challenges and led by researcher Miguel Delibes Mateos, from the Instituto de Estudios Sociales Avanzados (IESA-CSIC), the IREC collaborates in the evaluation of the changes that have occurred in the land uses of these habitats over time, in the study of how their management can influence the abundance and availability of the key resources that they offer to the turtle-dove throughout the reproductive period, and in the identification of the management scenarios that have greater social acceptance.

The effective conservation of the European turtle-dove requires more research. Don't miss our progress! We will keep you updated through the "Iniciativa Tórtola”.