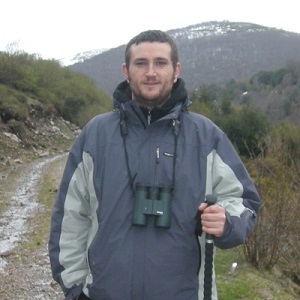 Francisco Ruiz Fons is Graduate in veterinary (2002) by the University of Murcia. He was a MPU FPU fellow at the Instituto de Investigación en Recursos Cinegéticos (IREC – CSIC, UCLM, JCCM)where did you get your doctorate in 2006.

It was hired postdoctoral from the Castilla-La Mancha Community Board (JCCM), from the Carlos III Health Institute in “The James Hutton Institute” (Aberdeen, Scotland; 14 months) and from Neiker-Tecnalia (Derio, Bizkaia; 24 months). It was also hired JAE-Doc CSIC at IREC between September 2010 and December 2011, researcher “Juan de la Cierva” of MINECO until December 31, 2014 and "Ramón y Cajal" researcher from January 1, 2015 to present. In 2018 it was incorporated as scientific head of the CSIC to IREC, within the Research Group in Health and Biotechnology (SaBio).

Francisco is the author of 98 SCI publications, 19 informative publications, 11 book chapters and 85 conference presentations. She has participated in. 23 competitive projects (6 as IP or Co-IP) and in 16 contracts with the Public Administration and / or companies (3 as IP).

its main scientific and technical achievements they include the identification of the maintenance and transmission mechanisms of the Aujeszky's disease virus in wild boars and control methods, the identification of the role of wildlife in the dynamics of shared infections; characterization of the determinants of life cycle and vector density as ticks (eg. Ixodes ricinus, Hyalomma lusitanicum), mosquitoes (ex. Culex pipiens), jejenes (not. Culicoides imicola) and sandflies (ex. Phlebotomus perniciosus, Ph. ariasi); the identification and exemplified conceptual definition of the emergency risks of pathogens with pandemic potential; and the study of techniques and protocols for Q fever control in livestock and wildlife.

His line of research combines knowledge of the field of ecology, ethology and evolution with own knowledge of the field of veterinary science (pathology, microbiology, epidemiology, preventive medicine, diagnosis) in order to understand what are the mechanisms by which different groups of pathogens (direct or indirect transmission or indirect transmission mediated by vectors) are maintained and transmitted between different hosts, causing diseases (“One Health” approach) to design, test and offer tools for their prevention and control.

Francisco has been a project evaluator for ANEP and ANR, member of the evaluation commission of the panel "One Health" for the ANR, reviewer of 83 international scientific articles, associate editor of the journals "Galemys" and "Frontiers in Veterinary Science“.

In addition, he has directed 9 Master's projects and 3 final degree projects. She is a member of the Spanish Society for the Conservation and Study of Mammals (SECEM) and of the "Wildlife Disease Association (WDA)“.