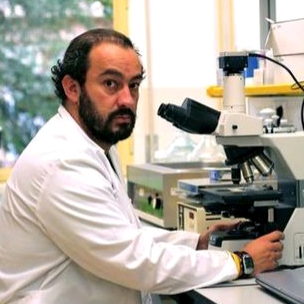 As a researcher, Julián is head of a research team funded by the National Research Plan (now state) since 1997 uninterruptedly, accumulating 4 six-year research at present. His work as an integral part of the current Research Group in Health and Biotechnology (SaBio) IREC has focused primarily on the cryopreservation of semen and artificial insemination in wild ungulates, the study of the consanguinity and reproductive parameters in wild ungulates, the endocrinology basic and reproductive control of wild ungulates and the reproductive ecology in ungulates. Julián was a member of the multidisciplinary research team that achieved the first birth through artificial insemination and the application of frozen semen of an endangered gazelle specimen.

He is the author of more than 140 research papers in international journals of impact in diverse fields of veterinary sciences, ecology, animal science and reproductive biology, among which several contributions published in the journal stand out. Science. In addition, he is the author of several chapters in books, monographs and invited reviews in impact magazines and director of more than 15 doctoral theses. Julián is also a promoter partner of a technology-based company (spin-off) specialized in biotechnology and health: SABIOTEC.