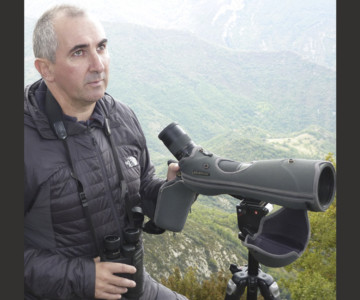 Antoni Margalida Vaca (El Pont de Suert, 1969) holds a PhD in Sciences (ecology and evolution) by the University of Bern (Switzerland). From 2011 it is senior research associate at the University of Bern (Institute of Ecology & Evolution, Division of Conservation Biology). Between 2013 and 2018 was researcher Ramon y Cajal in the University of Lleida (UdL), in the Department of Animal Science, where he has taught for biodiversity and conservation. He is currently scientific head of the CSIC at the Institute for research on resources Cinegéticos (IREC).

His research focuses on finding ways to balance the objectives of conservation of wildlife and human development. His main research interest is to understand how variation space of human activity into the medium affects the population dynamics and ecology of vertebrate behavior threatened, with the goal of providing tools to the managers and conservationists to optimize decisions and improve the conservation of threatened taxa. During the first years of his career as an independent researcher researcher, he focused his interest in aspects of the ecology of the behavior applied to the conservation biology. His current research line focuses on the services ecosystem and wild human conflicts and its interaction with the systems of agro-ganaderos, the economic implications and the factors that can regulate populations. Currently, he is focusing his line of research developing new computational models bioinspired applied to services provided by carrion birds ecosystem in collaboration with researchers at the University of Lleida.

Also developed lines of research focused on the analysis of contradictions between environmental and health policies, to demonstrate that the scientific arguments may trigger policy action positive and help reconcile conservation biodiversity and human activities. Finally, it develops another line related to the biology of conservation and ecology of endangered species behavior, interested in finding ways to balance the objectives of conservation of wildlife and human development. The application of both disciplines can provide tools to managers and conservationists to streamline decision-making and improve the conservation of endangered species.

He has participated in 15 research projects (7 in competitive calls) and 8 in agreements or contracts which have involved an investment of 1.6 million. He has directed 7 projects such as IP, 4 for 2010-2016. He has published a total of 227 scientific papers, of which 144 are articles in SCI journals, 6 books and 54 chapters of book. His h-index is 29 (Google scholar h = 39; i10 = 102) and has been quoted in 2500 times (WoS) (4400 in Google Scholar). It has 90 publications in journals of first quartile (including contributions in Nature, Science, PNAS, TREE) and has participated in 50 papers or communications scientific, corresponding to 36 (19 domestic and 17 international) 14 meetings and scientific. He has directed 1 PhD thesis and is currently managing other 2. He has directed 5 works end of degree and supervised other 3. It is currently forming 2 Fellows FPI (UdL and MINECO) and 1 Juan de la Cierva (training).