The thesis studies the applications of biological control using raptors as a tool to prevent agricultural pests of the peasant vole, as well as the potential effects of this method on other non-target wildlife species and on the transmission dynamics of pathogens such as tularemia.

In Europe, common vole (Microtus arvalis) It is considered the vertebrate species that produces the greatest agricultural damage during periods of high population density. Starting in the 1970s, the species colonized most of the cereal plains of the northern sub-plateau of the Iberian Peninsula. From practically the beginning of this geographic expansion, there were regular demographic explosions, accompanied by significant agricultural damage.

During plague episodes, rodent population control has been carried out systematically through chemical control campaigns based on the application of anticoagulant rodenticides. However, due to the serious negative effects that this type of chemical treatment has on ecosystems, for years it has been suggested that development of biological control techniques as sustainable alternatives to protect crops. 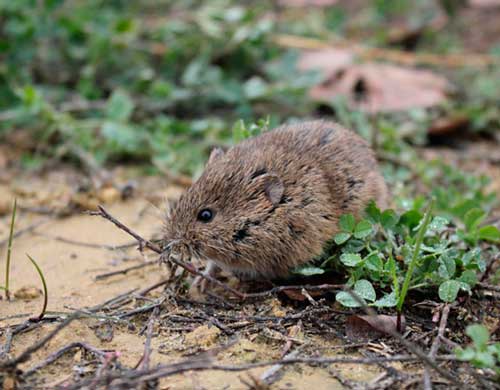 The peasant vole has colonized Tierra de Campos and is the cause of important ecological and socioeconomic impacts during the periods when it becomes a pest.

A doctoral thesis from the University of Alcalá, defended by the recently appointed doctor Alfonso Paz Luna, and directed by researchers Javier Viñuela and Juan Antonio Fargallo, from Research Group in Game Resources and Wildlife Management of the Instituto de Investigación en Recursos Cinegéticos (IREC – CSIC, UCLM, JCCM) and the Department of Evolutionary Ecology of the National Museum of Natural Sciences (CSIC), respectively, have evaluated the applications of biological control using raptors as a tool to prevent agricultural pests of peasant voles.

In it, they have explored the efficacy of biological control by predation in highly deforested agricultural ecosystems of the Iberian Peninsula and where both damage due to the presence of the peasant vole and the Mediterranean vole have been recorded (Microtus). For this they selected two species of indigenous predators whose populations can be increased relatively easily by installing nest boxes: the common kestrel (Falco tinnunculus) and the barn owl (Tyto alba).

The results of the different scientific works that make up the doctoral thesis have shown that the installation of nest boxes was effective in reducing the abundance of both vole species on a local scale, especially in alfalfa and fruit crops. They also observed how the abundance of peasant voles decreased in the vicinity of the occupied nest boxes.

Regarding possible adverse effects on other species of birds, a negative effect of nest boxes on the abundance of two common bird species in agricultural environments, the boyera washerwomanYellow wagtail) and the white washerwoman (Motacilla alba). Considering the possible effects of biological control on a game species, specifically the red partridge (Alectoris rufa), in this thesis they have found that the presence of nest boxes can vary the detectability in the density estimates depending on the census methodology used.