The monograph, which has been edited by the IREC, aims to synthesize all the knowledge about the population status, distribution and reproductive parameters of the bearded vulture until 2018.

When we are thinking about the Bearded vulture (Gypaetus barbatus) we always remember that it is a kind of vulture that does not feed on meat, but on tendons and bones of ungulates that are broken into smaller pieces by flying over rocky surfaces and dropping the bones on the rocks below. Unfortunately, this magnificent bird of prey is also difficult to forget because of it is the most threatened scavenger bird in Europe.

This is the basis of the need to have the monograph "The bearded vulture in Spain – Reproductive population in 2018 and monitoring method”, which has been edited by the Instituto de Investigación en Recursos Cinegéticos (IREC – CSIC, UCLM, JCCM). 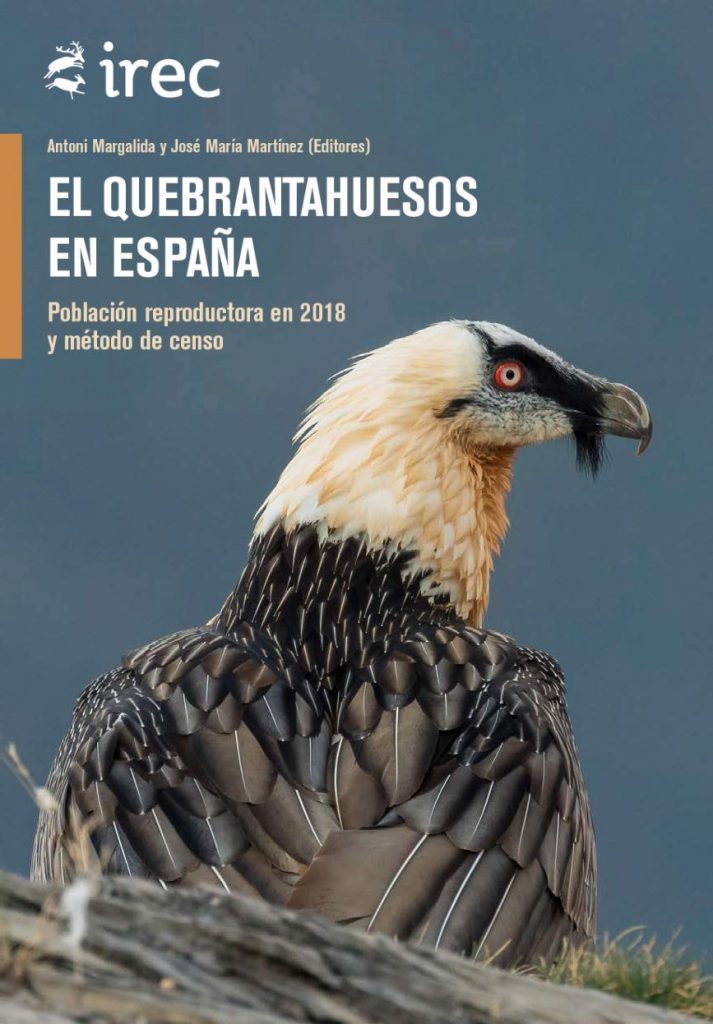 Cover of the monograph "The bearded vulture in Spain – Reproductive population in 2018 and monitoring method”.

It has been published thanks to the collaboration of the Regional Government of Aragón, the Regional Government of Catalonia, the Provincial Council of Navarra, the Provincial Council of Guipúzcoa, the Interregional Consortium of Picos de Europa National Park and the support of the ECOGYP Project for the protection of the habitat of scavenger birds on both sides of the Pyrenees.

The monograph is the result of a meticulous work of data and information collection with the aim of synthesizing everything we know about the population status, distribution and reproductive parameters of the bearded vulture until 2018. Thus, it collects data on the actions carried out through the Recovery Plans of the species in the regions of Navarra, Aragón and Catalonia, as well as the actions promoted by the Strategy for the Conservation of the Bearded Vulture in Spain, coordinated by the current Ministry for Ecological Transition and Demographic Challenge. It also includes data obtained in the framework of reintroduction projects coordinated by the Regional Government of Andalusia and the Regional Government of Asturias. The editors' objective is to update it every 10 years, as it happens with national monitoring actions for other species of vultures, in order compare the population trend of the bearded vulture with that of the rest of European vultures.

The editors of this work, which aims to become a bibliographic reference that contributes to define the bases for future conservation strategies of the bearded vulture, point out that it would never have been a reality without the tireless work of Nature Protection Agents (Aragón), Cos d'Agents Rurals (Catalonia), Guarderío Forestal (Navarra), technicians, NGOs, volunteers and anonymous observers. They also highlight the contribution of professionals such as Rafael Heredia and Martine Razin for their great coordination work in the monitoring of the Pyrenean population carried out over several decades.

Some details about the editors

Antoni Margalida holds a PhD in Science by the University of Bern and enjoy a tenured scientist position of the Consejo Superior de Investigaciones Científicas (CSIC) at the Instituto de Investigación en Recursos Cinegéticos (IREC - CSIC, UCLM, JCCM). He has dedicated most of his research work to study the ecology and behaviour of threatened species, completing his PhD thesis and dedicating most of his scientific production to the bearded vulture.

José María Martínez is a biologist attached to the General Subdirectorate for Rural Development and Sustainability of the Provincial Service of the Department of Agriculture, Livestock and Environment of Huesca (Regional Government of Aragon). His work has focused on the study and monitoring of threatened species in Aragon, being responsible for the bearded vulture monitoring in this region since 2008.