This meeting of the European project ENETWILD, which was held in form of online workshop, had the participation of international experts on wildlife monitoring and has laid the foundations for coordinated decision-making in Europe.

Through ENETWILD, the European Food Safety Authority (EFSA) funds this project to collect comparable data at European level to analyse risks of diseases shared between wildlife, livestock and humans; data that are also essential in conservation and wildlife management.

To contribute to improve the European capacities for a common, harmonized and reliable wildlife population monitoring, and its application to policy, the II ENETWILD Annual General Meeting brought together 110 expert stakeholders and collaborators from 32 European Countries to discussions on days 5th and 6th October..

The premise under which discussions of the II ENETWILD Annual General Meeting were developed is that wildlife monitoring is an inherent part of the process of informed management. 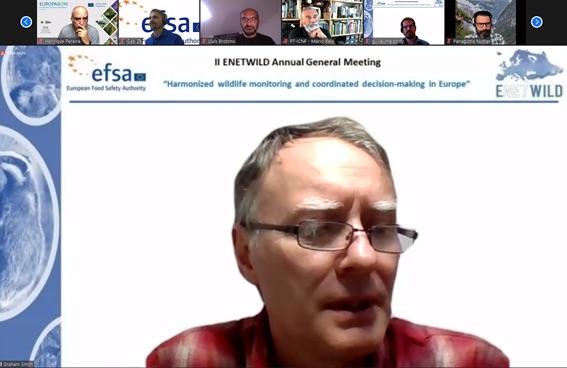 ENETWILD, the European scientific network on the distribution of wildlife and its transmissible diseases to animals and people, It is led by the Institute for Research on Game Resources (IREC - CSIC, UCLM, JCCM).

Specifically, workshop discussions are analysing and proposing approaches for a harmonized European-wide wildlife monitoring framework, and they are exemplifying on the case of wild boar, as a paradigmatic species widely distributed across Europe. The way to deal with the complexity of international management decision making in this case, in the context of current African swine fever outbreak, are valuable to guide international management for other terrestrial wildlife. A specific outcome will be the elaboration of comprehensive guidelines for coordinated European Wild boar management plans. This will include, among other aspects, how wild boar monitoring efforts, currently inexistent or scattered across regions must harmonize, which also applies to other terrestrial mammals.

The outcomes of this meeting will help to to make institutional decisions coordinated both vertically (i.e., from local to international levels) and horizontally (i.e., among interest or sectors at each level) to generate a collective action.

II Conference on emerging zoonoses: the role of the UCLM in the pandemic