Fieldwork will now be followed by studies genetic individualization and connectivity and kinship studies to assess the level of individual inbreeding in the Cantabrian brown bear population, which will be key for rigorous updating of the conservation status of the species.

The regions of Galicia, Asturias, Cantabria and Castilla y León, in coordination with the Ministerio para la Transición Ecológica y el Reto Demográfico (MITECO), have finished the fieldwork that will enable to conduct the first population estimate of Cantabrian brown bear (Ursus arctos) that, based on the genetic analysis of non-invasive samples, uses spatially explicit methods.

This work will now be followed by a study of genetic individualization, which will be carried out by the Universidad Autónoma de Barcelona, and studies of connectivity and kinship, which will be carried out by the Instituto de Biología Evolutiva (CSIC). All this work will count with the methodological advice of the Research Group in Game Resources and Wildlife Management of the Instituto de Investigación en Recursos Cinegéticos (IREC – CSIC, UCLM, JCCM), which will also deal with the data processing and the final analysis of the population estimate.

Only in Castilla y León, more than 4,500 kilometers of 26 forest areas in the provinces of Zamora, León, Palencia and Burgos have been walked in search of signs of the presence of brown bears, covering a land area of 730,000 hectares. Regarding the number of squares sampled, of the 292 squares surveyed, signs of the presence of brown bear have been collected in 136, 69 squares with presence in the western subpopulation and 67 squares in the eastern subpopulation, including some in the provinces of Zamora and Burgos, which is of great interest. 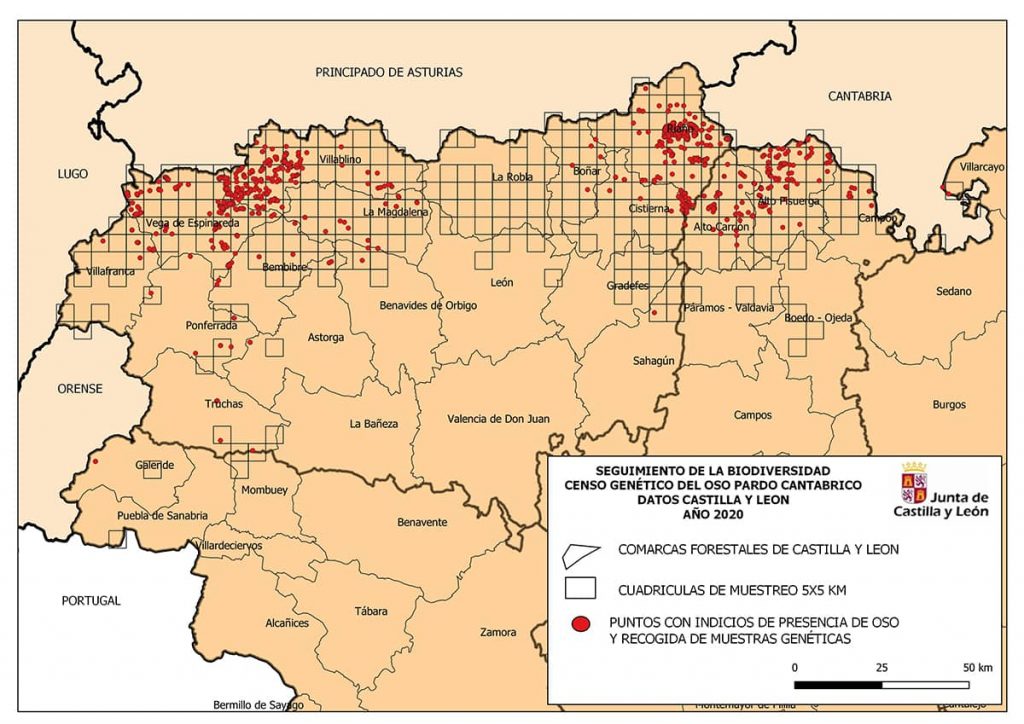 Map of the points with signs of the presence of brown bear and collection of non-invasive samples for genetic analysis in Castilla y León.

The field work that has just concluded has counted with the involvement of more than 150 professionals during four months, including forestry engineers, biologists, environmental agents, environmental guards and members of the "Bear Patrols", and has had the collaboration of the Fundación Oso Pardo. As a result, a total of 914 samples, 620 excrements and 294 hair samples, have been collected.

One of the most important novelties of this work resides in the fact that the genetic analysis of the samples collected will be conducted by using state-of-the-art sequencing techniques which will allow to analyze their genetic individualization and, based on this, carry out a study of connectivity and kinship. Moreover, by using spatially explicit methods , it will allow to estimate the location of the bears within their distribution range and to improve population density estimates.

This is essential to evaluate the level of inbreeding of the different specimens of brown bear currently present in the Cantabrian Mountains, especially considering the recent exchange of specimens between the eastern and western subpopulations.

The data and information resulting from this research work will allow the diagnosis of the conservation status of the species to be updated rigorously with a view to preparing the new recovery plan for the Cantabrian brown bear.