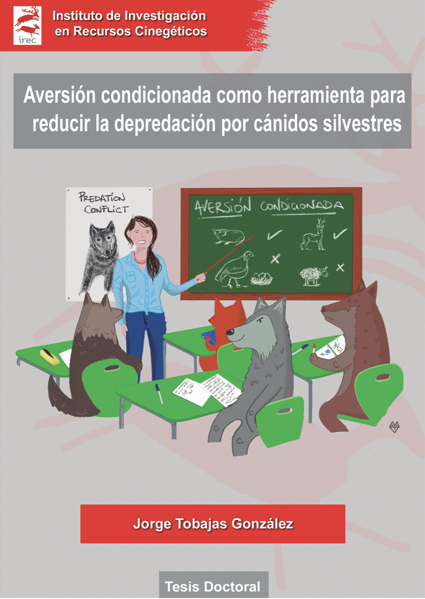 Where: Hall of the IREC

Thesis title: "AVERSION CONDITIONED AS A TOOL TO REDUCE DEPREDATION BY SILVEESTERS"

One of the main conflicts between humans and wild carnivores results from predation on livestock and saheeic species. As a result, many populations of carnivores are subjected to control by different methods, including some illegal and not selective such as poison. This approach is not sustainable and has little acceptance by various sectors of society, so it would be advisable to develop new tools aimed at controlling predation. One tool to avoid the use of these methods and reduce predation is conditioned aversion to flavor (AC). This technique seeks to induce aversion to a food or prey by a chemical that causes discomfort

predator shortly after ingestion, avoiding consuming such food in subsequent encounters. The overall objective of this Doctoral Thesis is to develop AC as a tool to reduce predation by wild canids, improving the effectiveness and safety of substances to be used, developing methods for use in nature, and evaluating their effect on prey populations to be protected.

In a first phase I carried out a bibliographic review of the previously used substances and other series of candidate substances that meet a number of characteristics to be used in AC experiments. These features are: toxic effect, safety margin, time in effect, accessibility and detectability. After the bibliographic review, select the five substances (levamisol, tiram, fluconazole, fluralaner and tiabendazole) with the highest toxicological safety margin to test them as an aversive agent with dogs in captivity and assess their ability to generate AC and its effect on the health of dogs. The results showed that three substances produced AC (tiabendazole, levamisol and tiram), of which two (levamisol and tiram) were selected for a second experimental test in captivity with 12 dogs, divided into three experimental groups (aversive, aversive artificial odor, control). The results of the levamisol test show an initial reduction in food consumption due to the acquisition of AC, which remained stable after 11 months in the group "levamisol odor signal", gradually dissolving in the odourless group, due to the the ability of dogs to detect traces of smell and taste of levamisol, even though it had been microencapsulated. The experiment showed that the AC generated by tiram without the odor lasted longer (three months) than with the odor (two months). It also showed that, contrary to levamisol, tiram is undetectable by dogs. Hematology analyses and blood biochemical parameters conducted during captive experiments indicate that no dog affected its health as a result of the administration of the substances.

In recent decades, the populations of the two main small game species of the Iberian Peninsula, the mountain rabbit (Oryctolagus cuniculus) and the red partridge (Alectoris rufa), have been greatly reduced. To improve these populations, predator control and translocations are one of the most used kinetic management tools. Conditional aversion (AC) allows to reduce the consumption of a food, and therefore predation on a prey, by adding a chemical that causes discomfort (vomiting) in the consumer. It will avoid the consumption of the food in subsequent encounters, even in the absence of the substance that generated the discomfort. We have experimentally tested the application of AC in foxes (Vulpes vulpes) to: 1) Reduce predation on partridge nests, and see the effect of this reduction on the productivity and density of wild partridges. 2) Reduce initial predation on the rabbit in translocations, improving its survival and achieving an improvement of the receiving populations after translocation. AC treatment reduced the predation of artificial nests, increasing productivity and partridge density, compared to control areas. On the other hand, AC reduced predation on the rabbit, improving its survival in the first days after translocation, significantly increasing the occupation of the loose vivares, and positively changing the population trend. The abundance of rabbit tripled in the treatment zone while in the control zone increased slightly. These results indicate that AC can be a non-lethal tool to reduce repression for wild canids, with clear application in the management of kinetic resources.

In the last phase, and as a pre-user step for AC in wild wolves, we conducted an experiment with wolves in captivity using the levamisol plus a sign of smell (vanilla). For four weeks (pre-conditioning) a group of five wolves was fed muflon baits. After this phase the wolves were conditioned in a single day (conditioning) offering them the baits with the substance and smell. After that day, weekly they were offered bait without the substance but with the smell (post-conditioning). Before conditioning the wolves always consumed muflon baits, while after conditioning they stopped eating the muflon for at least a month. Two of the wolves to which the odor concentration was reduced re-eaten the baits, showing that the odor signal can play an important role in the maintenance and extinction of AC. The possible application of this method to avoid predation in the context of the Iberian wolf has also been analysed.

Experiments show that it is possible to generate AC in canids in conditions of captivity and could be used as a kinetic management tool to reduce predation on partridge nests and on the rabbit by wild canids. In addition, we have taken the first step in developing AC in controlling wolf predation over livestock, with the aim of helping mitigate its damage and improve coexistence between man and wildlife. The use of this technique can contribute to reducing predator control measures and, in particular, the use of illegal control methods, such as poison, which significantly affect species of carnivores and scavenger birds.