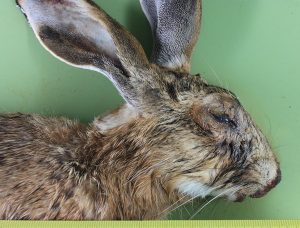 The hunting sector and especially the hare hunters are warning throughout the summer-autumn about mortality cases in Iberian hares(Lepus granatensis). Hares from several regions, mainly Andalusia and Castilla - La Mancha, have been analyzed in different laboratories. The Central Veterinary Laboratory of Algete, under the Ministry of Agriculture, confirmed that it is myxomatosis, a viral disease frequent in the rabbit, transmitted by vectors (mosquitoes and fleas). This situation raises several questions about the consequences of myxomatosis for hare populations and about the opportunity for urgent intervention. At IREC we want to help contributing the following considerations:

1.- How does myxomatosis affect hare populations?

We do not know. The perception in some hunting clubs is that the mortality has been high, and certainly there are specific hunting grounds in which the number of dead hares recovered thus attests. However, there are also hunting grounds where mortality has been only sporadic. The failure of which we hunters, administration and scientists must learn is not to have periodic censuses of all the important game species, including hares. Had censuses been available, mortality could have been quantified as a percentage of the total population, and voluntary hunting bans and management measures could have been customized. The good news is that with the arrival of the cold one would expect less activity from the mosquitoes that transmit this virus.

2.- Are there treatments or vaccines, and can they be applied effectively?

No. Fake news have circulated about the alleged efficacy of antibiotics and other medications, administered by mixing them with oats. Myxomatosis is a viral disease, and antibiotics are antibacterial drugs. In addition to being illegal and irresponsible, there is no scientific basis to justify the use of antibiotics against myxomatosis in hares. Regarding vaccines, there are commercial vaccines that protect rabbits against the virus, and its possible application in hares has been discussed, although its efficacy is unknown. But there are several barriers that prevent it. The main one is that these vaccines, in order to be effective, must be applied to non-stressed individuals in good body condition, ideally dewormed. And it is not a single injection, but two vaccinations separated by about three weeks. Only a few days after revaccination, sufficient antibody production would be achieved to be protective. Achieving this massively in field hares is unlikely and would result in significant losses due to stress and traumas during the captures.

Hunters help in various ways, by monitoring and sending samples (hares and rabbits) and through voluntary hunting bans. The myxomatosis outbreak has demonstrated the enormous capacity of the hunting sector for early warning in cases of unusual mortality. In addition, the sector has mobilized immediately to collect and send hares to laboratories, providing information and valuable samples to understand the origin, distribution and consequences of outbreaks. In the most affected regions or counties, voluntary bans have even been established or hare hunting quotas have been reduced. These measures are prudent and timely, and speak very well of the hunter's concern for the environment.

At IREC we offer hunters and administrations all our capacity in censuses and estimates of abundance and health surveillance and diagnosis. We must learn the lesson and develop integrated monitoring systems for game species that allow us to quantify the effect of any epidemic and ensure early detection. We greatly appreciate the samples and information provided in a disinterested manner by hunters, hunting clubs and associations.