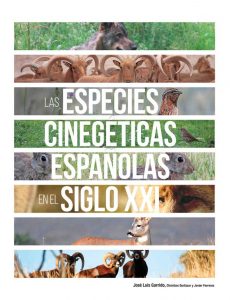 The book "Spanish hunting species in the XXI century”It has an outstanding scientific contribution from the Institute of Research in Hunting Resources (IREC - CSIC, UCLM, JCCM), and is the result of a titanic work of data and information collection that It allows to know the evolution, demographic trends and current abundance distribution of the main hunting species in Spain.

For each of the 17 species analyzed A graph is provided that represents the evolution of hunting results by season, from the 2000/01 season to the 2017/18 season. Visual information on each species is completed with two maps showing the recent evolution - from the 2013/14 season to 2017/18 - of the hunting results by autonomous community and the provincial hunting results for the 2017 season. / 18 per square kilometer of surface, respectively. The accompanying text explains the variations observed with the passage of time and territorial differences, analyzing their implications for optimal management of each of the target species.

The book concludes with a chapter in which the authors reflect on the different factors that determine the changes observedGenerally related to human activity, and encourage the reader to reflect on what should be the population monitoring of game species in the 21st century.

The raw data on which the results and conclusions of the book are based They can be consulted in the following databases, which are downloadable and freely accessible:[Data provinces] (For seasons 2017/18 2013/14 to) and [Data communities] (For the seasons 2000/01 to 2017/18).

The Dr. Christian Gortázar, IREC researcher and coauthor of the book, is interviewed in the program "Onda Agraria"Onda Cero on the contents of the book and its usefulness to determine the population status of the main game species in Spain and its evolution over the last two decades you. In this link you can access the podcast full [min 8:30 to 18:18]. can also access interview he did on "CMM Despierta“ Broadcasting of Castilla-La Mancha.

[VIDEO] Hunting in the Middle Ages of the Peninsula - By José M. Fradejas Rueda