In our increasingly more remote rural society, Hunt is strongly questioned. It is expected that this situation evolve a worst complies decreases the number of hunters (Massei et al., 2015) and animal rights thinking earn followers (Boadella and Cortázar, 2018). However, there are powerful arguments to defend hunting

First there is the argument of freedom, which includes the cultural aspect and the passion for hunting. It is a legal activity, but above all a desire to own our species from the same origin. It is more, our evolution as a species and the development of our brain will surely not have been possible without access to the lean meat from hunting (Mann, 2000). Today hunt is entertainment rather than a necessity, but is still a passion which has a roots and a wealth of traditions that justify its permanence. Second, hunting generates economic activity: 178,000 jobs in Spain according to the report by Deloitte for the Artemisan Foundation (2018). And much of this activity occurs in the regions most remote and unproductive, in that rural Spain that urgent support. Many rural properties are dependent on revenues generated by hunting to supplement that generated the agricultural, livestock and forestry activities and the fluctuating public support. Without hunting, many valuable land for its scenery and for its contribution to the conservation of biodiversity would be forced to change of use, further reducing economic activity and prospects for the future welfare of the affected regions. And finally the third argument, surely is of greater today: hunting as management tool, hunting as most sensible way of controlling the overabundance. 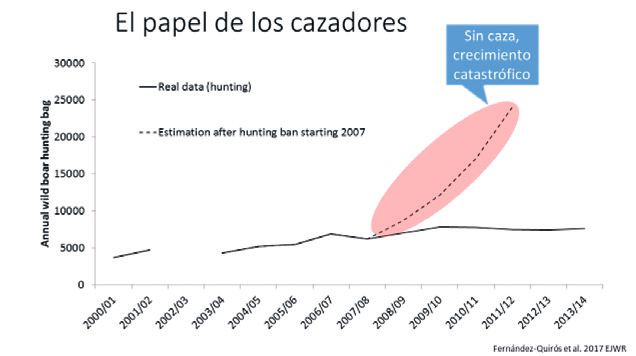 Fig. 1. Results of boar hunting for Asturias between seasons 2000-01 and 2013-14, and extrapolation of the trend in the absence of hunting from 2007 (dotted line). Source: Data of the Government of the Principality of Asturias, modified de Quirós-Fernández et al. (2017)

Hunting involves the use of a renewable natural resource, as is the case with other forest products such as mushrooms. But unlike these last, not hunt (do not harvest the annual production) give rise to growth do not want certain animal populations do. The case of the rabbit is a good example. Their proliferation in some agricultural areas, especially in the vicinity of large infrastructures such as motorways and railway lines, leads to situations of plague in which produced major damage to crops and irrigation infrastructures. It has been observed in the Valley of the Ebro which occurs mainly in areas where hunting pressure is low (Williams et al., 2007). Moreover, increasing populations of ungulates in many areas in recent decades is necessary to its regulation and control. The growth of populations of deer, roe deer and wild boar is the invasion of areas of cultivation, a health risk, among other negative effects on domestic livestock, as well as an increase in accidents in road. Therefore, ranked hunting contributes significantly to the control of susceptible species to the overabundance and involves the use of a renewable natural resource. This achievement, which therefore implies both the ecosystem and society service (Fernández-Quirós et al., 2017), is not dispensable today.

The most representative case is the wild boar, which is current by the re-emergencia of African swine fever in Europe (Böklund et al., 2018). In recent decades, populations of wild boar have multiplied in Europe (Massei et al., 2015) resulting in damage to agriculture, traffic accidents and other risks to public health, problems arising from the presence
wild boar in urban areas, but above all to increased conflicts with livestock and animal health. The wild boar has become an especie-problema or especie-plaga in Europe (Sanchez 2018). The continued growth of the populations of wild boar would be accelerated in the absence of hunting. In Asturias, where the annual growth of the populations of wild boar was 6% between 2000 and 2014, estimated that in the absence of hunting the increase would have been 40% yearly, resulting in an exponential growth in the population of wild boar (Fernández-Quirós et to the.) 2017, fig. (1). i.e., the current hunting pressure is not enough to stabilize the populations of wild boar, but contributes very significantly to its regulation.
For all the above reasons, it seems sensible to work from the academy and the administrations to ensure the survival of hunting as an activity that generates leisure and culture, wealth and equilibrium in the natural environment. This, however, also involves regulating those aspects that do not marry the positive role of hunting, such as supplementary feeding or the management of hunting waste, among others. The hunt will only survive if the other sectors of the rural environment perceive it as an ally.