The cycle of conferences coincides with the last two months of the exhibition "The Hunt: An Evolving Challenge”, And throughout the month of May it will consist of four conferences that will be held on Thursdays of the month at 7:00 p.m.

The exhibition "The Hunt: An Evolving Challenge”, Which has been in the Ciudad Real Museum since December 2019, has become the star informative event on the hunting world and the science developed by the Instituto de Investigación en Recursos Cinegéticos (IREC – CSIC, UCLM, JCCM) for the promotion of sustainable hunting.

Since December 2020, the different sections and themes of the exhibition have the support of an illustrated book-catalog The aim is to "guide" the readers and visitors of the exhibition through this fascinating encounter with one of the endogenous resources most closely linked to the evolution of humanity.

Now, IREC, in collaboration with the Association of Friends of the Ciudad Real Museum, begins a cycle of conferences coinciding with the last two months (May and June 2021) in which the exhibition will be available. Throughout the month of May, the cycle will consist of four conferences that will be held on Thursdays of the month at 7:00 p.m. 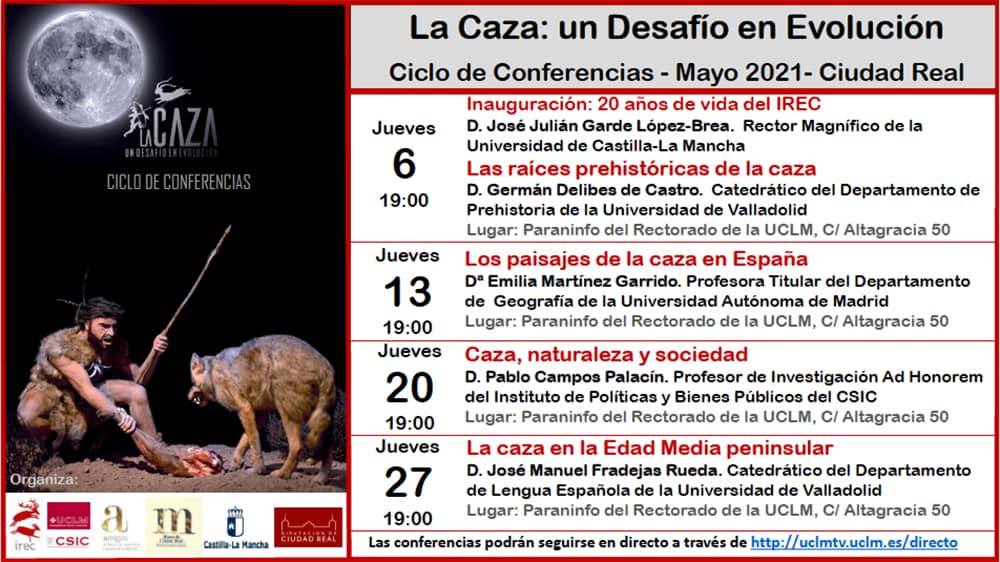 Program of the cycle of conferences for the month of May 2021 of the exhibition “The Hunt: An Evolving Challenge”.

The first of the lectures, entitled The prehistoric roots of hunting, will be given on Thursday, May 6 by Professor D. Germán Delibes de Castro, Professor of the Department of Prehistory at the University of Valladolid. This conference will take place in the Auditorium of the Rectorate of the University of Castilla-La Mancha (UCLM) after a introduction by the Rector of the UCLM, Mr. Julián Garde, in which he will put this cycle of conferences in context with the more than 20 years of IREC's work.

On Thursday, May 13, the second conference will take place, in the Convent of La Merced, which will have the title Hunting landscapes in Spain and it will be taught by Professor Dª. Emilia Martínez Garrido, Associate Professor of the Department of Geography of the Autonomous University of Madrid.

The third of the lectures is entitled Hunting, nature and society and will be given by Mr. Pablo Campos Palacín, Research Professor the Nightingale from the Policy and Public Goods Institute of the Higher Council for Scientific Research (CSIC) and the Lucas Mallada National Prize for Economy and Environment in 2002. This conference will take place on Thursday May 20 at the Convent of La Merced.

To end the cycle of conferences corresponding to the month of May, the conference will take place on Thursday 27 Hunting in the peninsular Middle Ages, which will be taught by Mr. José Manuel Fradejas Rueda, Professor of the Department of Spanish Language at the University of Valladolid.

People interested in attending the conferences in person must communicate it by email to the following email address, in order to check the capacity possibilities and to deliver the invitation: Mariapilar.ruiz@uclm.es. On the other hand, the lectures can be followed virtually live through the following link: http://uclmtv.uclm.es/directo.

Throughout the month of June we will continue with more conferences, encompassing other areas of culture and knowledge in which hunting is also present.