More than 60 students from three educational centers in Castilla-La Mancha become "scientific citizens" thanks to "Investigating mammals from your living room”, One of the IREC activities during Science Week.

At the Instituto de Investigación en Recursos Cinegéticos (IREC – CSIC, UCLM, JCCM) we could not miss the opportunity to contribute our bit to the Science and Technology Week (SCT) through some activities of scientific communication with which to bring the world of wildlife closer to society, especially to the youngest.

One of these activities, called “Investigating mammals from your living room”, Has been developed through three sessions with three different educational centers in Castilla-La Mancha. In total there have been more than 60 students of Compulsory Secondary Education and Baccalaureate, from the educational centers of Los Navalmorales (Toledo), Puebla de Montalbán (Toledo) and Argamasilla de Alba (Ciudad Real), who have become “scientific citizens ”Thanks to web applications that will allow them, from now on, to collaborate in research on the biodiversity of European mammals.

The students who have participated in the activity have been able to know how they can collect mammal observations with mobile apps and help scientists classify images captured with camera traps. In addition, during the activity the students have been able to use their mobile phones and computers to participate in online games and share your knowledge about the wildlife in your environment. 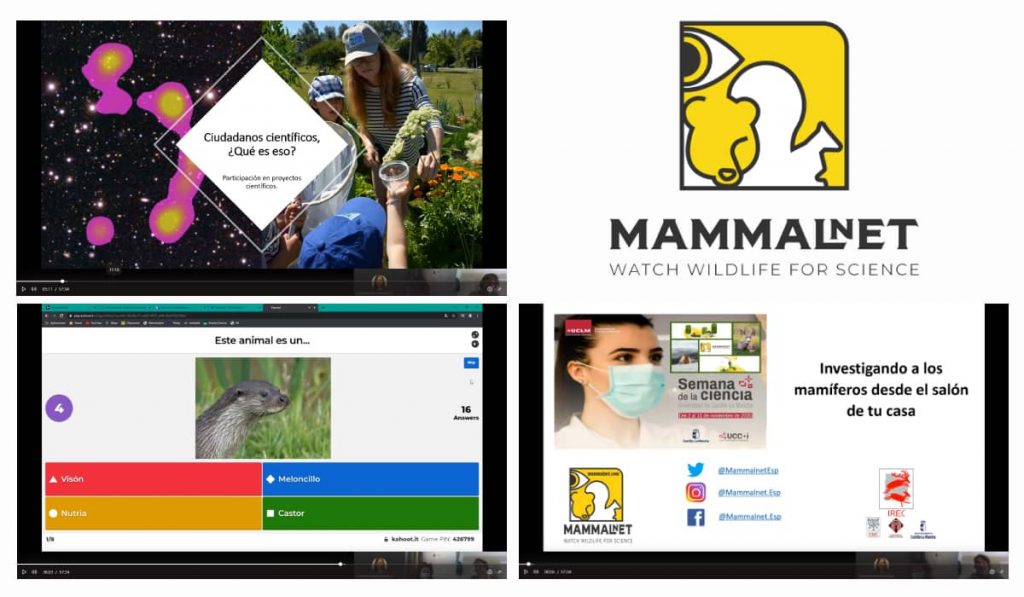 Here are some screenshots of the online activity "Investigating mammals from your living room", developed by IREC during Science and Technology Week (SCT) 2020.

From IREC we want greatly appreciate the interest shown by other educational centers that could not join the activity due to scheduling problems, and by the centers participating in this edition, which have expressed their interest in repeating the activity in the future with other groups of students. Of course, we will be delighted!