The guidance, focused on medium to big size wild carnivores, is the third document in the trilogy after the guidelines for wild boar and wild ungulates.

Carnivores are specialized predators with a relevant ecological role inside the trophic cascade, influencing lower trophic levels by regulating the structure and functioning of many ecosystems. In total there are 35 species of carnivores in Europe including native and exotic ones. Several wild carnivore species are widely distributed across Europe and they use different habitat types, whereas the distributions of others are more restricted and associated to certain regions or habitats.

Most species require conservation efforts in Europe, and some promote conflicts in local situations and/or represent a risk for livestock and/or public health. Given the diversity of species, their ecology, management, available methods and the geographical diversity of Europe, methodological harmonization of monitoring techniques is duly needed, if possible, using multi-species cost-effective, practical and reliable methods.

To do this, ENETWILD has published the “Guidance on estimation of abundance and density of wild carnivore population:Methods, challenges, possibilities”, available in PDF, which deals with medium to large terrestrial European carnivores, and evaluates the methods used in nine large wild carnivore species widely distributed across Europe and/or representing relevant sanitary concerns: the red fox (Vulpes vulpes), the wolf (Canis lupus), the golden jackal (Canis aureus), the brown bear (Ursus arctos), the European badger ((Meles meles)), the Eurasian lynx (Lynx lynx), the Iberian lynx (Lynx pardinus), the Northen raccoon (Procyon lotor) and the raccoon dog (Nyctereutes procyonoides). This guidance is the third in a trilogy after the guidances for the wild boar and other wild ungulates. 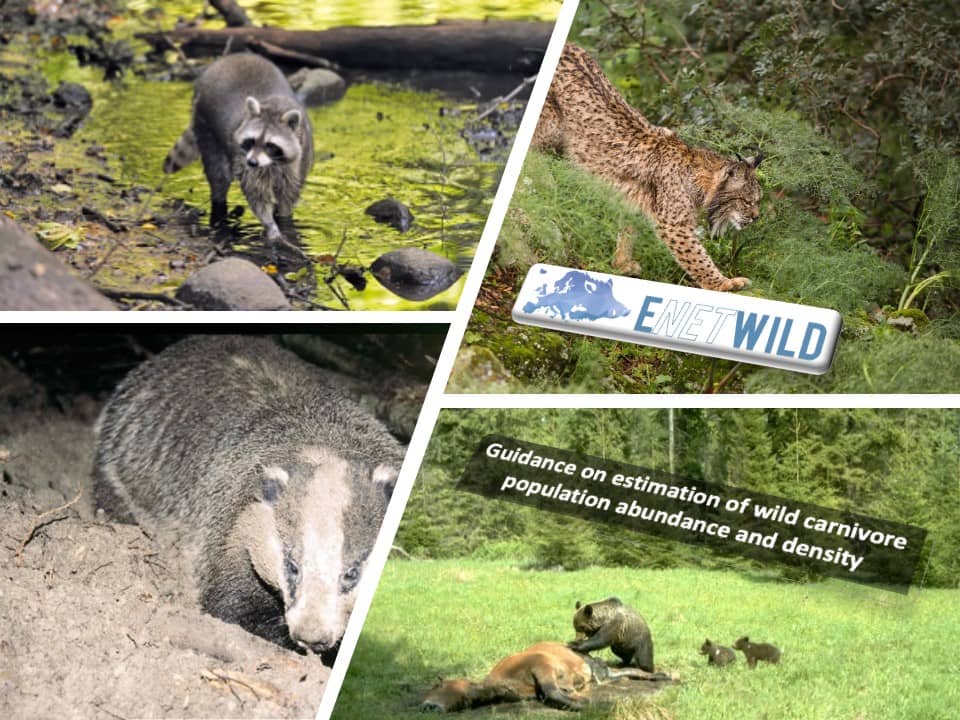 The guidance gives an overview of the methods to estimate relative abundance and population density of the above mentioned species over Europe, providing some recommendations to their selection. Moreover, a relevant outcome of this guidance is the evidence that not all of the different approaches that have been used to assess wild carnivore population size over Europe have been validated, with particular emphasis for recently developed camera trapping methods.

As a result, comparisons among different areas and species are often complex to be conducted. While the report concludes that it is impossible to highlight a single best method that is effective for each species (or an universal method for all) or for each environment, every method for estimating wild carnivore populations has its own range of applicability, depending on the geographical, geomorphological, vegetational, and land use conditions, as well as species biology.

What is crucial is selecting the method to be used in a harmonized way, and for that purpose, this guidance provides detailed instructions for the design of most recommended methods, but specific protocols must be adapted to local conditions.

The camera trap methods, especially those recently developed, are promising and can be conducted in a wide range of species, habitats and densities with minimal adjustments, and at any time, to collect robust data. They normally need to be used in combination with other approaches, such as trapping, marking, and telemetry. Camera trapping has a moderate/high cost and moderate effort, high accuracy and precision, also at low densities, and can be used in most environmental conditions. Methods that use camera-trap and not require individual recognition have recently been developed and represent a good compensation of cost, effort and accuracy.

The authors remark that there is need for compiling and validating abundance data of wild carnivores at different spatial scales. Based on the ENETWILD initiative, it is recommended developing a permanent network and a data platform to collect and share local density estimates, so as abundance, in the EU.

Initially, it would allow to identify geographical gaps in the data on wild carnivores and to focus on these areas to improve predictions. This platform would facilitate the reporting by wildlife policy makers and relevant stakeholders.

It is also specially interesting the complementary use of citizen science initiatives through projects such as MammalNet as well as working with open data through platforms of information on worldwide biodiversity such as the Global Biodiversity Information Facility (GBIF). It is therefore essential to involve national and regional administrations in data collection and sharing, as well as the hunter and conservationist associations.