Scientists from the IREC, the Universities of Cordoba and Leon, together with the research centre VISAVET and the valuable help of collaborators of the sector and administrations, are studying how to characterise and improve biosecurity against wild ungulates through a common and systematic protocol in extensive farms in Mediterranean dehesas

In recent years, the Research Group in Health and Biotechnology (SaBio) of the Instituto de Investigación en Recursos Cinegéticos (IREC – CSIC, UCLM, JCCM) has been tackling, in an interdisciplinary way, the diseases shared between wildlife and livestock reared in extensive farming.

The biosecurity against wildlife, understood as the reduction of interaction risks at the domestic-wildlife interface, is an essential tool for the control of these diseases. However, extensive production systems lacked detailed, specific, and systematic protocols to assess biosecurity against wildlife, as well as implement and evaluate actions to reduce their interactions and, therefore, prevent the emergence of shared diseases. 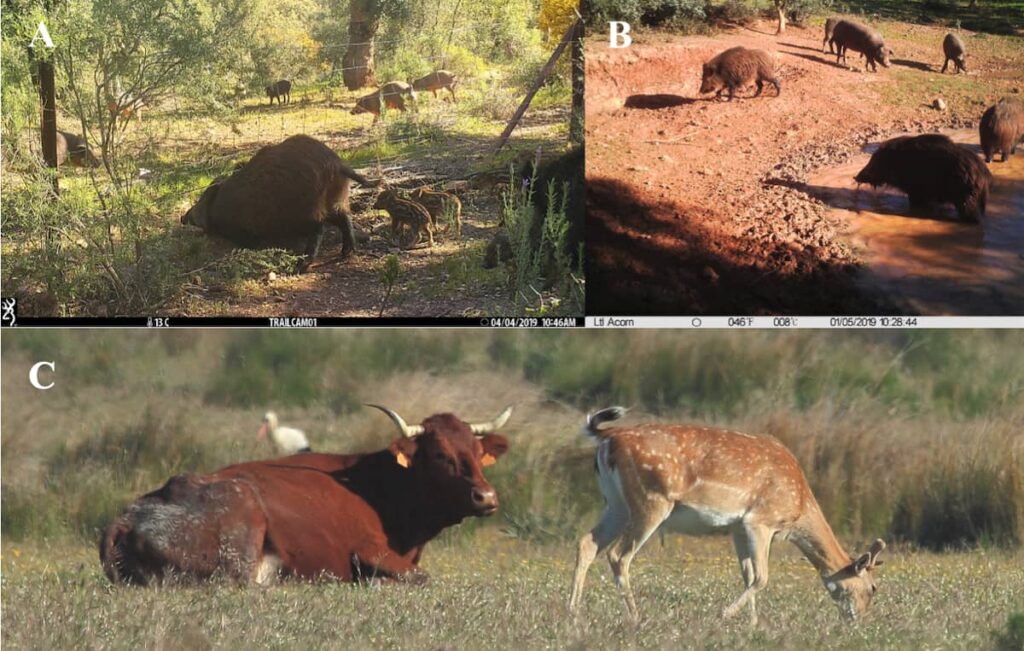 Interspecific interactions between domestic and wild ungulates in feeding plots (A), water holes (B) or communal pastures (C).

To control the transmission of relevant shared diseases, such as tuberculosis animal (TB) in Mediterranean ecosystems or African swine fever (ASF) in Eastern and Central Europe, it is essential to reduce the risk of interaction between livestock and wild ungulates. The current TB situation and the spread of the ASF virus further west are depleting the cattle and pig sectors in the affected regions, and seriously threaten other countries involved in trade relationships with these regions.

In this line of research carried out in Spain from 2015, it was assessed the risk of interaction between wild ungulates and livestock on 100 extensive farms (55 cattle and 45 pig farms) to propose biosecurity-related actions. For this purpose, a systematic risk mitigation protocol was developed, specific to each farm.

The protocol consists of three phases. Phase 1 consists of the collection of general information and potential risk points or actions. It includes both data collected before visiting the farm (provided by the responsible administrations) and data collected during the visit (an epidemiological survey and a field audit of each potential risk point identified in the survey).

The former includes the size of the farm, perimeter, land use, livestock species present and their censuses, health status, animal in/out-movements in the farm, etc. Among the latter, more precise information on the distribution, handling and/or management of livestock, wildlife, feed, water and facilities is included.

All this information is used to prepare a farm-specific action plan (phase 2), the biosecurity programme, which lists and classifies risks, and proposes mitigation actions (priority and alternative) to reduce exposure at each risk point. Finally, the action plans are handed over to the farmers and, the following year, the proposed actions are audited again to assess the acceptation of the plans (phase 3).

The results of these works showed that most of the interaction risk points (&gt;80%) were associated with watering places for animals, mainly springs and ponds, especially those with a diameter lesser than 20 metres. These points accounted for almost all points with a high or very high-risk score on a scale of 1-5.

The risk of interaction at feeding points and those associated with livestock and/or hunting management facilities (<10% each) were rated as low and very low risk, respectively. Wild ungulates present, meanwhile, were hunted and supplementary fed in more than 50% of the surveyed farm territories. On average, 16.0 (range: 4-43) and 18.5 (range: 4-56) risk points were identified for cattle and pigs, respectively.

Frequency and risk score (1-5) of all identified risk points in pigs during growing (light colours) and pigs at montanera (dark colours).

The risk mitigation actions were categorised to target water access, waterers, food, other livestock species, grazing, wildlife, and contacts with offal disposal (not for human consumption). Most were identified as priority actions, while a minority represented less cost-effective alternatives. 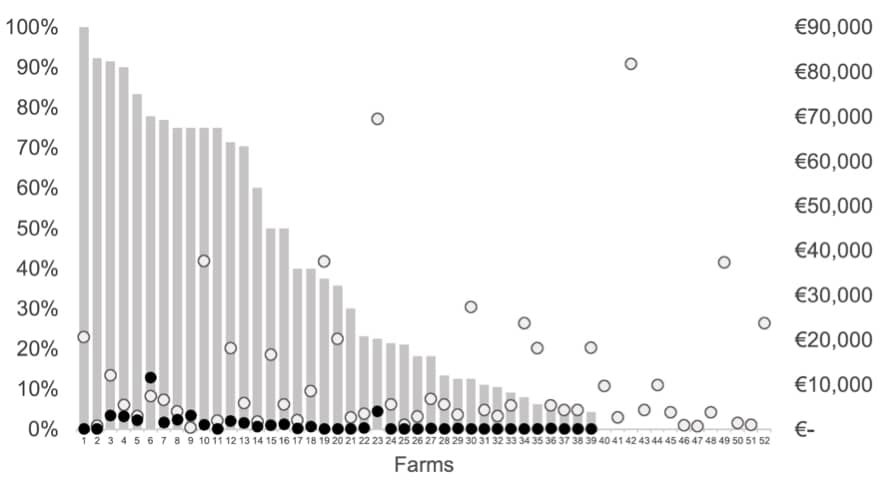 Implementation rate of biosecurity plans on cattle farms (n=52). The grey dots represent a priori estimates of the costs of the plan (€) and the black dots represent the actual costs incurred by farmers.

These studies represent a key practical advance towards preventive and integrative health management of the wildlife-livestock interface in Mediterranean environments. They are the first to use a systematic protocol to assess interaction risks on extensive farms in Europe, and to our knowledge, the only ones for outdoor pig production worldwide.

The results highlighted the health risks of water points, as well as the difficulty in managing them. The farmers were also informed about the need to stop the simultaneous double exploitation of the territory (big game/extensive livestock farming), as it generates a conflict of interests due to the health consequences.

This protocol has the capacity to define any relevant epidemiological characteristics on farms, their management and risks, allowing the creation of individual action plans at farm level/specific risk point. Furthermore, it allows the prioritisation of mitigation actions according to their feasibility and expected effectiveness, which facilitates the saving of resources and effort.

Monitoring and verification of the proposed actions was useful to assess acceptability by farmers from a practical, functional and economic point of view. Finally, although the protocol focuses on TB in Mediterranean environments, the approach can be adapted and extrapolated to other domestic species, diseases, and ecosystems. Moreover, the flexibility of the protocol facilitates its refinement and/or adaptation for professional purposes, so that it can be applied by technicians in the sector after adequate training.

The quality and usefulness of the information derived from the protocol would be significantly improved with specific training sessions for the agents involved (livestock farmers, veterinarians and administrations) and with the standardisation and normalisation of data collection. A correct standardisation of the data collected by the different auditors will be decisive for decision-making at local, regional and even national level.

In this sense, in November 2021, various researchers and specialists from different institutions gave training sessions following the methodology described above, financed by the Ministry of Agriculture, Fisheries and Food, for the Official Veterinary Services on "Biosecurity applied to extensive livestock farms in areas of special risk in the framework of Royal Decree 138/2020", which had excellent feedback. 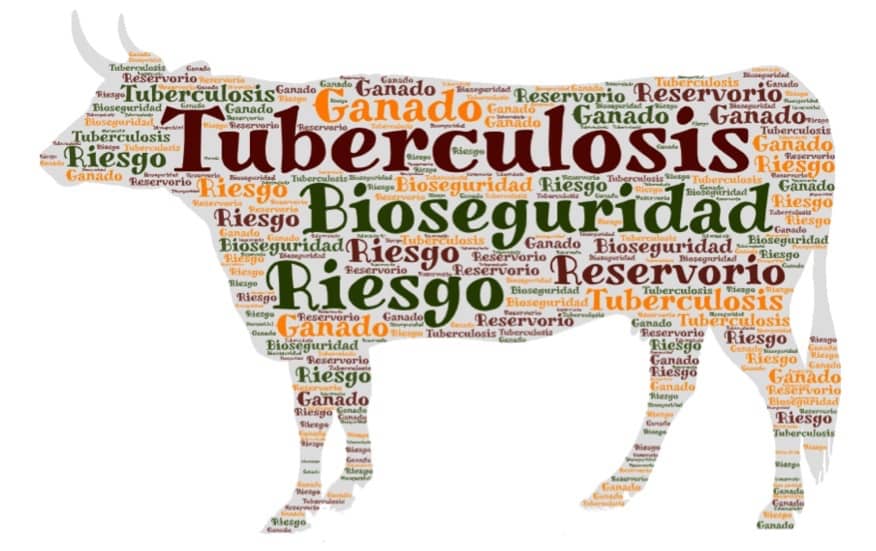 The scientific publications of these research works are available at: